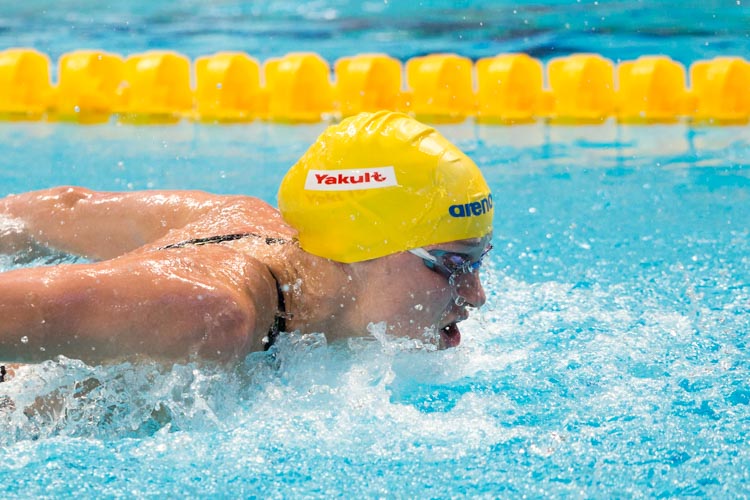 Among the top five performances from day 1 of the Indy stop of the Champions Series, Sarah Sjostrom and Nicholas Santos earned series sweeps. Stock photo via Tim Binning/TheSwimPictures.com

On the opening day of the final stop of the FINA Champions Series at the IUPUI Natatorium, two series sweeps and new world #1s highlight the performances from Friday night. Here are the top five performances from day 1 of the Indianapolis series stop.

1. Two years later, Lilly King topples Yulia Efimova twice —after a two-year racing drought between the finger-wagging rivalry of King and Efimova, the IU post-grad came out on top twice over her Russian counter-part. With her first dive next to Efimova since 2017 Worlds, King was out quick. Efimova attempted to gain on King, but could not hold off the American’s closing speed. King produced a lifetime best of 2:21.39 in the 200 breast to hold off Efimova by two-tenths. Later in the night, King did it again to swim the 9th-fastest 50 breast in history with a world leading time of 29.63. In the Budapest series stop, Efimova swept all three breaststroke events. Tomorrow, King has one last shot to shut out Efimova in the 100 breast, where both swimmers produced 1:05s this year.

2. Sarah Sjostrom Doubles Up on Series Sweeps — stacking up 11 total series wins is Swede star Sarah Sjostrom, who confirmed the total with two series sweeps in the 100 fly and 100 free. In the 100 fly, Sjostrom looked like winning off the start and powered a new world leading time of 56.42. Since Guangzhou, Sjostrom has been progressively getting faster throughout the series, swimming 57.16, 56.78, and now 56.42. In the 100 free, it was an epic four-way battle between Olympic champions. Sjostrom touched first in a 52.97 ahead of sprint free Olympic champs Pernille Blume (53.68), Ranomi Kromowidjojo (53.72), and Penny Oleksiak (54.22). Sjostrom continued her consistency with all three of her series swims within two-tenths of each other (52.82, 53.03, 52.97).

3. Brazil’s Nicholas Santos Takes Series Sweep in 50 Fly —the 39-year-old Brazilian continues to swim like he’s in his new prime with the second event series sweep of the night. Santos sealed the 50 fly sweep against 20-year-old American Michael Andrew (23.11) and world record-holder Andrii Govorov (23.14). Santos produced his second sub-23 swim of his series swims with a 22.94, narrowly two-tenths ahead of Andrew and Govorov. Earlier in Guagzhou, Santos swam a 23.01. Later in Budapest, Santos set a new South American record and world leading time of 22.60.

4. Margherita Panziera 2-0 over Katinka Hosszu in 200 Back —the Italian defeated the Iron Lady for the second time in the series in an exciting race. The pair, along with Canadian Kylie Masse, were all in a tight threeway after the last 150. However, Panziera and Hosszu pulled away from Masse into the final meters. But it was Panziera that shut out Hosszu to defeat her again 2:06.64 to 2:06.94. Earlier in Budapest, Panziera dominated Hosszu by two seconds, winning with a 2:06.41. Panziera currently holds the fastest time in the world with a 2:05.72.

5. Vladmir Morozov Holds Off Michael Andrew in 50 Free —after taking a silver and a bronze behind Brit Ben Proud, the Russian finally won his first race of the series ahead of American sprint phenom Michael Andrew. It was a dogfight between Andrew and Morozov, with Andrew appearing to take the lead around the halfway mark. But Morozov quickly turned on the gas and zipped ahead of Andrew at the finish to win with a 21.65. His time was just a tenth off his world #4 time of 21.55.

Sjostrom continues to set the standard for excellence. James Gibson and company at Energy Standard. It’s gonna be impressive to see what their crew does in the next year plus.

Here’s links to when James and one of his assistant coaches, Tom were on the podcast.

No…it means in the Budapest stop of the Champions Swim Series that was a few weeks ago.

How are the swimmers chosen for each of the races?

Supposedly the Olympic Champion, World record holder, World Champion, and maybe #1 in world. But people like Peaty have all those titles and turned down the invitation. Not sure how they did the invites after that????

Medal from the last Olympics or Worlds, world rankings and after it who is already there and accept the nomination in an off event of her/himself.