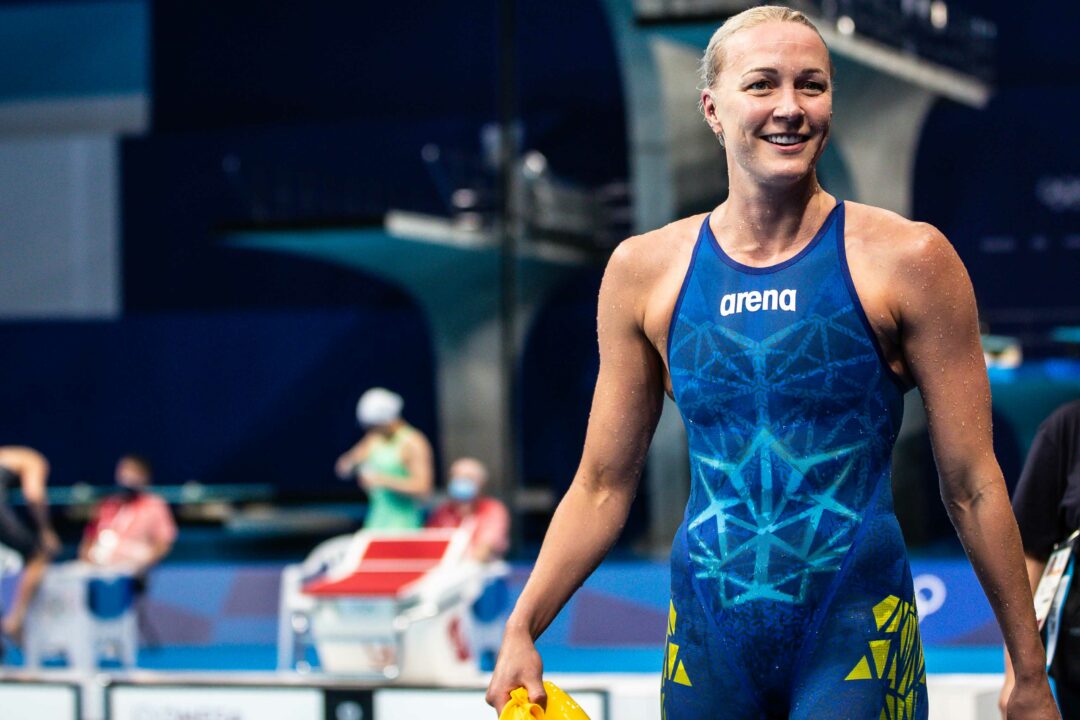 The 6th finals session at the Tokyo 2020 Games will be one of the only ones all week without a relay event. That, however, doesn’t mean that there won’t be tons of exhilarating races to watch to get us through it.

King will be in on the action as well, having posted a 2:22.27 for 5th in the semi-finals. Despite being better known for her 100 breaststroke abilities, can Lilly King rise to the occasion here and take gold in the 200?

It’s not just Schoenmaker that King will need to worry about as a newcomer to the breaststroke scene in Evgenia Chikunova of Russia had a solid morning semis swim of 2:20.57. King and Schoenmaker’s respective teammates Annie Lazor and Kaylene Corbett were also in the top 5 during semis with their times of 2:21.94 for 3rd and 2:22.08 for 4th, respectively. Rounding out the field will be the British duo of Abbie Wood (2:22.35) and Molly Renshaw (2:22.70) and Belgium’s Fanny Lecluyse (2:23.73).

A similar storyline appears in the men’s 200 backstroke as does in the women’s 200 breast. Just as defending champion Lilly King fell to 3rd place in the 100 breast, Ryan Murphy didn’t manage to collect gold in the 100 backstroke and instead took bronze. Murphy will also have a shot at taking gold for himself individually here in the 200. Murphy will enter the final as 3rd seed to Evgeny Rylov of Russia who was a 1:54.45 in the semi for 1st and Luke Greenbank who hit a 1:54.98 for 2nd.

Rylov took gold in the 100 backstroke and will have his eyes on collected a double backstroke title. The Olympic record will be on alert as the worlds best go up against each other in the final. The mark sits at a 1:53.41 which the USA’s Tyler Clary delivered in 2012. Joining the leading duo here will be Hungary’s Adam Telegdy, Spain’s Nicolas Garcia Saiz, American Bryce Mefford, Polish swimmer Radoslaw Kawecki, and Japan’s Ryosuke Irie.

Following the women’s 200 breaststroke and the men’s 200 backstroke, we will get to one of the most anticipated races of the Olympics. The women’s 100 freestyle final will host an incredibly talented field where anyone could come out on top.

Can Cate Campbell pull off a long-awaited redemption and pick up her first-ever individual Olympic gold medal, or will her teammate Emma McKeon come out on top? After a rather silent period of time between Rio 2016 and now, will 2016 co-champion Penny Oleksiak make it back to the top, claiming her 7th career Olympic medal or will Sarah Sjostrom manage to get her first medal of the Games to complete an impressive post-broken elbow comeback?

Abbey Weitzeil will be the only sole representative for the USA in the final and will have a shot at making a mark in the absence of teammate and 2016 champ Simone Manuel. The second seed, however, is Hong Kong’s Siobhan Haughey who recently took silver in the 200 free and could be on her way to Olympic medal #2.

Femke Heemskerk has raced at 4 Olympic Games and has collected relay gold and silver but still has yet to win a medal individually. Can she keep her cool and get past the elite field and find her way onto the podium? Lastly, the newest face to the field is British swimmer Anna Hopkin who already set a national record of 52.75, and should she be able to shave more time off in the final, will be in the mix for a medal.

It truly is anybody’s race.

In order to make it to the top here, Shun will have to fend off British all-star Duncan Scott who has also stood on an Olympic podium, having won 200 free silver in Tokyo. Scott is right behind Shun with a 1:56.69 from semis and will have his eyes on the prize in the final.

Another man that will be giving his all tonight is Daiya Seto. Seto is swimming for redemption tonight after missing the men’s 400 IM final which he was the favorite to win. Seto swam a bit too slow in the prelims and wound up 9th overall. He was unsuccessful again in the 200 butterfly when he touched 11th overall in the semis and didn’t advance into the final. Seto didn’t have any problem in the 200 IM, however, and swam a 1:56.86 in semis to qualify for the final in 3rd place for 1 final shot at an at-home medal.

Beyond Shun, Scott, and Seto, American 4th seed Michael Andrew will put his unique first-150-under-world-record-pace strategy to the test and try to come back strong on the final 50 to get his hand on the wall first. It worked for him at US Trials but the Olympics is a whole new arena. Veteran Kosuke Hagino is sitting in 6th overall with a 1:57.47 while Switzerland’s Jeremy Desplanches was a 1:57.38 in the semis for 5th. Rounding out the field will be New Zealand swimmer Lewis Clareburt who finished 7th in the 400 IM and multi-Olympic finalist Laszlo Cseh in 8th.

Anyone but that anti-vaxxer, anti-mask MA

Weitzel won’t win if everyone swims their best. If everyone else is slow and she pulls out a blinder she could do it. There’s no one in that final with 0 shot.

I’m a bit disappointed that the Olympics didn’t use the same displaying feature as this year’s European Champs in the relays, with the names of the top 3 swimmers for each split and not only the country’s name
It really made relays more readable, having to remember 8 times 4 swimmers’ names and order is getting hard !

100%, it should be implemented for all meets. IMO, they should also show times for all lanes, not just top 3.

Michael, make sure you put some extra baking soda in your water bottle! We need you to break 30 in the last 50!

We haven’t had a repeat medalist in the women’s 100 m since Natalie Coughlin’s second bronze in 2008, so we’ll see if Oleksiak or Sjostrom can change that tonight.

Important swimming day for Australia after yesterday’s debacle. If Emma or Cate can pull off the win, I think that might give us a needed boost. If they both fail to medal (unlikely but absolutely possible), then what started as a dream Olympics for Australia could end up in disaster.

In the other events, I’m tipping Schoenmaker, Greenbank and Scott. I would love for Seto to win, but I just don’t think he has it at this point. It also wouldn’t surprise me if MA finds that extra energy he needs in the last 50 because it’s a final.

I know it’ll be a long shot, but I’m crossing my fingers Abbey can sneak into the podium for the 100 free