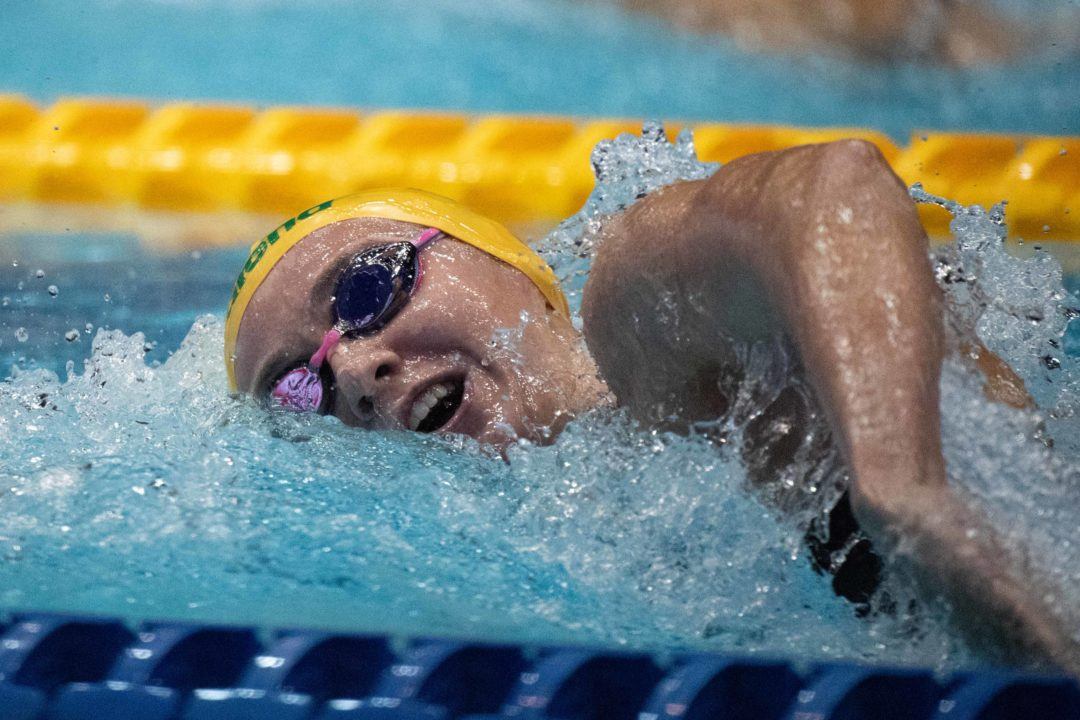 The women's 200 free went from looking like a competitive field to a race for silver after what Ariarne Titmus did last month in Australia. Archive photo via Mike Lewis/Ola Vista Photography

The story of the women’s 200 freestyle in the five years since Rio has been the unbelievable longevity and staying power of Federica Pellegrini, who turned back the clock and upset the likes of Katie Ledecky (2017) and Ariarne Titmus (2019) to win back-to-back World Championship titles in the event.

Pellegrini’s career in the 200 free is one of legend, having won a medal in the event at a staggering eight consecutive World Championships, but closing out her career with a second Olympic gold now seems to be far out of reach.

This isn’t because Pellegrini is incapable of a medal-worthy swim, but simply due to the excellence shown by Titmus last month at the Australian Olympic Trials.

In what was projected to be a battle between Ledecky, the defending Olympic champion, and Titmus, the race now appears to be for silver with the Aussie well out ahead of the pack. Behind Titmus’ 1:53.09, the next-fastest swim since the beginning of 2019 is Pellegrini’s 1:54.22 from Gwangju. Ledecky’s fastest in that time is 1:54.40, done earlier this year, while her only sub-1:54 was done in the Rio final five years ago.

Ledecky certainly hasn’t been at her best this year, but the 200 is where she’s shown the most promise, with that 1:54.40 from April her fastest outside of that Olympic-winning swim.

Joining her in the medal hunt will be Pellegrini, who has proven time and time again that she can’t be counted out. But the 32-year-old was planning to retire after the Games in 2020, and was upset she would have to swim another year due to the postponement. Has that hindered her training coming in? Her fastest time in 2021 is 1:56.23, so she’ll need to be at least a second better to have a shot at the podium.

The only other swimmer in the field that has been sub-1:55 in 2021 is Hong Kong’s Siobhan Haughey, who has now dipped into the 1:54s once in each of the last three years. Haughey went 1:54.44 last August (a time trial in Hong Kong, so it was never ratified as an official Asian Record) and followed up with a 1:54.89 this past April.

After a standout short course season in the International Swimming League, Haughey has the rare combination of speed and endurance to consistently be among the best in the world in this event.

Emma McKeon, the 2016 Olympic bronze medalist and third-fastest swimmer in the world this year, dropped this event from her busy program in Tokyo, giving fellow Aussie Madi Wilson a spot in the individual race.

Wilson immediately moved into the final conversation with McKeon’s withdrawal, ranking sixth in the world this year with a best of 1:55.68 from the Australian Trials.

OTHERS IN THE MIX

Beyond the names already mentioned, 2012 Olympic gold medalist Allison Schmitt headlines the rest of the field, having made her fourth U.S. Olympic team last month by placing second to Ledecky in Omaha.

Like Pellegrini, Schmitt’s fastest days are behind her, but she remains an elite 200 freestyler with a shot to make the Olympic final once again. Now 31, Schmitt was 1:56.01 in January 2020 prior to the pandemic, and was 1:56.79 at Trials. She’ll probably need to be closer to her time from last year for a top-eight finish.

Then there’s the Canadian duo of Penny Oleksiak and Summer McIntosh—the teenage star of the 2016 Games and another potential one here in 2021.

Oleksiak was sixth in this event at the 2019 World Championships, clocking 1:56.41, to book her ticket to Tokyo prior to the Canadian Olympic Trials. Then at those Trials, McIntosh, 14, dropped a 1:56.19 to top Oleksiak head-to-head in what was the fastest 15 & under swim of all-time.

Oleksiak is probably more of a favorite to medal in the 100 free, and McIntosh will also feature prominently in the 400 and 800 free, but both are in the hunt for a finals berth here in the 200.

Great Britain’s Freya Anderson is another contender to make the final in Tokyo, though like Oleksiak, her best event is probably the 100. Anderson swam a best time of 1:56.06 in early 2020, and snagged bronze at the European Championships in May in 1:56.42.

The 20-year-old has been known to come on strong over the last 50 in this race, and also has a lot of natural speed. If she’s able to put the two together it’s easy to imagine her hitting 1:55.

Czech Republic’s Barbora Seemanova actually won that Euro title in 1:56.27, her career-best, while France’s Charlotte Bonnet was fourth (1:56.55). Bonnet was an Olympic finalist in 2016, and broke through with a 1:54.9 to win the 2018 Europeans, but hasn’t reached that form recently.

China’s Li Bingjie and Germany’s Isabel Gose are a few other names to keep an eye on.

Dark Horse: Erika Fairweather, New Zealand – Fairweather, the 2019 World Junior champion in this event, is still just 17, but comes in riding a ton of momentum. After winning that title in Budapest two years ago in 1:57.96, Fairweather re-lowered her best time down to 1:57.58 in April, and also has some senior international experience under her belt, having placed 19th in the event at the 2019 Worlds.

As you said, this race is Arnie’s to lose. Hopefully she doesn’t. She’s going in with the right attitude by hyping Katie up and making herself the underdog. I hope it pays off for her.

Always out with the old and in with the new with the people On this site. No loyalty to any particular swimmer. Very sad

What does that mean? Should people just choose a swimmer and hope they win no matter what? Wouldn’t you prefer people to want the best for the sport than the best for an individual?

I could see it happening

Wonder if it will affect her at all that she hasn’t raced against anyone since the ISL. Obviously she’s physically ready, but will she get taken out of her race plan in an Olympic final?

Not gonna happen. Ledecky is either gonna be first or second in a close race with titmus.

I really want Arnie to win. I know her mental game is strong. Would it surprise me if she breaks the WR? No. No one will be close at the end. Very possibly like Allison in 2012. She blew the field away from the first stroke and I expect the same from Arnie.

Always out with the old and in with the new with the people On this site. No loyalty to any particular swimmer. Very sad

1
-31
Reply
TeamDressel
Reply to  He said what?

Are you really saying that Katie Ledecky who has been the most dominant female swimmer ever for the past 8 years and is defending Olympic champion will be blown out of the water? That’s absolutely preposterous

Ledecky has never really been dominant in the 200 free though.

It’s really not that outlandish a thought. Michael Phelps is the GOAT, but Schooling blew him away in the 100 fly in 2016. And Phelps won more golds in the Olympic 100 fly than Ledecky has for the 200 free at Worlds or Olympics.

Scary part about Titmus is that reproducing trials times on its own may be enough for 200m/400m/4x200m sweep.

Well, i don’t think anyone is coming close to Australia in the 4 x200.
Titmus in the 200 free is going to be very very hard to beat.
Only Ledecky can stop Titmus in the 400 & it will be a great race.

OR selecting Leah Neale in the finals line-up !

Haha, poor Leah, her history follows her.
We have good backup in Harris & O’Callaghan, tied 5th in Olympic trials faster then any other country’s 2nd best swimmer.

IF both Harris and O’Callaghan can gain confidence from solid 4×100 outings then that certainly makes life easier. I’d breathe easier had Neale not received a plane ticket. For the record, I am NOT in favour of writing swimmers off after 1 poor major intl meet but when we get 2-3 years/similar no. of significant meets and there is a clear formline of not performing when it counts, there is a case to be made for marking files “not to be selected again”.

I get you with Leah Neale.

My thinking Titmus, Wilson, MeKeon, now 4th swimmer, there is Neale, but also Harris, O’Callaghan, Throssel & even Tamsin Cook, the quickest of these 5 will join the former 3 in the final & think that would be too good for rest of world.
Harris & O’Callaghan are young & fast but inexperience, but in Throsell, she was in WC & WR swim in 2019 & Cook was anchor in RIO if you want a solid experience swimmer.

while neale have the potential to sink the finals relay, harris and o’callaghan’s heat swims, backed up by their performances in the 4×100, will mean that they don’t give neale the nod

For finals they may take Tamsin because she is a 400 swimmer & has Olympic finals experience. That was one gutsy swim anchoring in Rio.

Cannot wait for this race! Titmus for the win! Madi Wilson may surprise also

I just hope Madi doesn’t leave herself too much to do at the halfway mark.

The 400 could still be Ledecky’s race. The 200 belongs to Titmus unless the unlikely scenario that she is completely out of form at Tokyo. She’s going to be coming for that world record. Anyone of the rest of the field, including Ledecky, is going to have the swim of their lives just getting under 1:54.

Wasn’t the 400m where Ariarne dropped the F bomb when she missed the WR.
That may tell you she had a little more to give.

Very confident with Titmus winning her races
I wonder how fast she will go in the relay…….on paper she can do a 1:44.5 and Aus will win easy.

Yes …got a little carried away there.

Probably if they opt to have Chalmers swim instead of Titmus.

I didn’t realise how far behind Wilson was. She was literally last at 100m and then powered home for 3rd.

Yes. LOL I forgot about that!

The 400 is going to a really good battle between two women who go 3:56. Everyone in this comment section is acting like Titmus is going to destroy Ledecky. Titmus could very well choke after going so fast at trials. Ledecky is basically swimming with nothing to lose after her times at trials. Ledecky is about go crazy this Olympics because she finally has competition

TeamDressel doing mental gymnastics to dismiss someone and then explain why the American will win despite having way slower times.

I didn’t say Ledecky is going to win. I said it would a really close race/battle between Ledecky and Titmus

Here they go again. Americans praying for a ‘choke’ instead of saying ‘may the best swimmer win’

Wouldnt surprise me either….