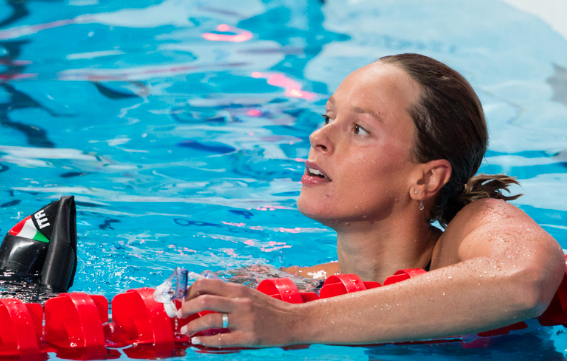 Federica Pellegrini knows postponing the Games is the right move, but is also incredulous to having to extend her career. "I don't want to believe it." Archive photo via Tim Binning/TheSwimPictures.com

Italian superstar Federica Pellegrini has long toyed with the idea of retirement, and after declaring her intention to compete at the 2020 Olympic Games in Tokyo, the writing was on the wall that she would call it quits after that.

Of course, with the International Olympic Committee (IOC) making the official announcement on Tuesday that the 2020 Games would be postponed due to the COVID-19 pandemic, potentially to as late as the summer of 2021, Pellegrini and her fellow athletes are left to figure out how to move forward.

The 31-year-old shared her thoughts on the matter via her Instagram story (@kikkafede88) on Tuesday, acknowledging that it was the correct decision while also in disbelief that she’ll have to extend her career an extra year.

“Right now, I’m kind of on two parallel tracks,” she said, translated from her native Italian. “On the one hand, the fact that I have to f****** swim another year — I don’t want to believe it. It seems like a joke, it seems like fate, but the fact is that I can’t stop swimming.

“Now it is logical that if none of what is happening in the world (was going on) I would have preferred to compete this year, that’s for sure. But since so many athletes do not have the opportunity to swim, to train for their sport, we would have arrived at an Olympics not being prepared. The decision to move them in a year’s time is the right one. I agree. We’ll prepare as best we can.”

A veteran of four Olympic Games, having competed at the highest level of the sport dating back to 2004, Pellegrini simply hopes that physically she’ll still be able to compete with the best in 2021.

“It’s a question of reprogramming everything,” she said. “Hopefully, the body will last for another year.”

LEN and Italian Swimming Federation president Paolo Barelli has also weighed in on the situation, saying the IOC decision is “better late than never” and that he knew “for weeks” this would be the eventual outcome.

Pellegrini had shown recently that she was on track to perform well this summer, doing a simulation of the Italian Olympic Trials after its cancellation in Verona, Italy. The 2008 Olympic gold medalist went 53.6 in the 100 free before following up with a 1:55.8 200 free.

Pellegrini won gold in Beijing in the 200 free, and won her other Olympic medal, a silver, in the same event in Athens in 2004. Perhaps her most outstanding accomplishment is her success in the event at the Long Course World Championships, where the Mirano native has won a medal eight straight times, including golds in 2009, 2011, 2017 and 2019.

Italy has been in the heart of the coronavirus pandemic over the last few weeks. On Tuesday the country’s death toll saw a surge to 6,820, the highest in the world, reversing a declining trend seen over the two previous days. The total number of confirmed cases in Italy is 69,176.

I’m confused whether she likes or hates swimming

Maybe at this stage of her career she loves competing but hates all the training.

Oh boy I can relate so deeply to it….

It’s more about the age I think
There’s a list of amazing women swimmers who really will struggle with be at the same level in 2021
Pellegrini, hosszu, C1, Belmonte, ranomi… All around 30 or more.

I think there are a lot of swimmers who would define their relationship with swimming as a love/hate one.

Aren’t we all at some point?

Maybe there is just something lost in translation in her interviews? I am hoping that, because I love to f****** swim.

she’s been on the international scene since 2004….she probably just wants to eat her cake and dip