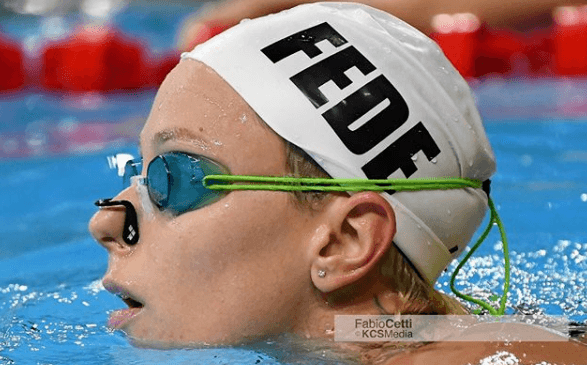 Pellegrini noted that Katie Ledecky would not be the only threat in a potential 200 free final in Tokyo. Archive photo via Fabio Cetti - KCS Media

Italian freestyler Federica Pellegrini, the world record holder in the 200m free in long course, has expressed interest in racing at a fifth-consecutive Olympic appearance. Pellegrini turned 30 just this summer.

Pellegrini, the first woman under 4:00 in the 400 free and first Italian woman to be an Olympic champion, announced in August that she would be deciding ‘by autumn’ on whether or not she is going to retire from the sport. In a recent interview with Italian newspaper La Gazzetta dello Sport, which was broken down in a recap by SwimSwam Italia’s Giusy Cisale, she said that she does indeed plan on going forward with a plan for Tokyo.

She and coach Matteo Giunta agreed that (roughly translated from Italian), “after six years I needed to change something in terms of preparation. We have just introduced different and intense exercises, increasing the specific work without weighing the loads: new things to achieve the same goals as before.”

She also said that she was hoping to employ this new plan of quality over quantity, in order to remain in top form without being too broken down when it comes time to race.

When asked if she’d thought about Ledecky and the Olympic schedule, as the 200 free final and 1500 free final will be in the same session in Tokyo, Pellegrini said, “Yes, but the final of the 200 comes first… and in any case I do not think only of her, but of all the young people who sprout, the others are the real danger.”

For the near future, Pellegrini says she’ll compete at the upcoming Nico Sapio Trophy in Italy as well as the Italian Winter Nationals, but while she’s been pre-selected for the 2018 World SC Championships, she hasn’t made a decision yet on whether she’ll race there. It’s also unclear what events she’s focusing on for Tokyo, but recent event lineups and her 2017 200 free gold would suggest the 200 free is of primary focus, along with the 100 free and relay duties.

By far it looks more like an attempt to boost an interest in her as five times Olympian. Relays will be probably a target. 200 event will be probably the one hard to make final at. We have already five swimmers capable to swim under 1:55. And it’s very possible that two more are coming in two years.
1:54.7 is still a good time to complete for the podium, but there is a serious concern if she can do it again in two years.

No doubt in my mind Pellegrini makes the final if she’s willing to do the dirty work. Medal? Hard to imagine at this point, but class is permanent. 200 free is just as much about bringing your A game when it matters as it’s about making fast times and she’s always done that to perfection.

I was incorrect: besides Pellegrini 9 active swimmers (not counting Franklin) have personal best under 1:55. We don’t see penetration into 1:53 zone yet with the exception of one race of Katie Ledecky but you should feel that the wave is coming. 1:54 is becoming like 52 in 100 – must swim time. Under such conditions making Olympic final in 200 free can be problematic for Pellegrini.

“I’ll decide if I’ll retire within the next month or two.”
[ five weeks pass ]
“Ok, I’ve decided not to retire yet.”

Maybe it’s just the language barrier, but that doesn’t instill me with much confidence.

She doesn’t owe anyone an explanation…

Pellegrini may be trying to get this announcement out ahead of the October 15 anti-doping suspension hearing of swimmer Filippo Magnini, her ex-boyfriend of six years with whom she used to live. He faces a possible 8-year suspension for dealing in performing-enhancing substances via a disreputable character named Porcellini.The rough Google Translate of the Italian News Service article linked below and by Swimswam in previous reporting on this matter says in its final paragraph that “There was a net attempt to separate Magnini from Pellegrini, but she too was a customer of Porcellini.” If that translation is correct and if it is a true statement, then further investigation or questions for Pellegrini from the international anti-doping community are surely warranted.… Read more »

Anything is possible in the World of PEDs. However she was 54.4 as a 15n year old so I am inclined to think she us 98% natural talent. Also quite good looking so.please send me to that doc pronto . I will change my SwSw name to Novella Calamari in appreciation .