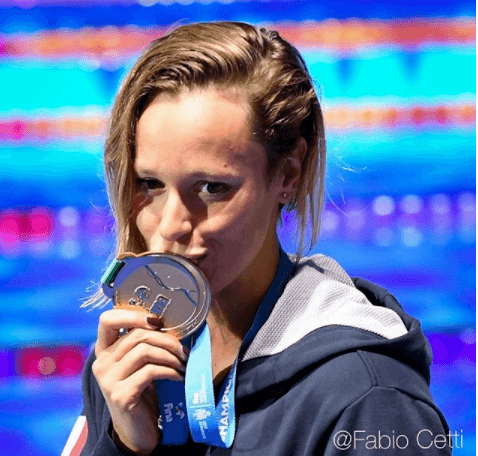 Czech swimmers got some racing in earlier this month, taking part in a short course competition in Znojmo. The filed included Euro Jr medalist Adam Hloben.

Sasha Touretski took part in her first meet back in the water since the death of her legendary coaching father Gennadi Touretski.

2008 Olympic champion Federica Pellegrini is considering retiring from the sport of swimming.

In an exclusive interview with the Weekly Chi in Italy, the reigning 200m freestyle World Champion said “I’m seriously thinking about leaving (swimming)”, claiming her heart tells her to stop due to issues ‘out of the pool’ while her head is telling her to continue. “By autumn I will decide what to do with my life”.

Pellegrini, who turned 30 earlier this month, hinted that if she does decide to retire, she has aspirations of becoming a mother.

The Italian triumphantly returned to major international glory last summer at the World Championships, winning gold in the 200 free over reigning Olympic and World Champion Katie Ledecky. That victory gave her an astonishing seven consecutive medals in the event, first winning silver in 2005, and was also her third gold after victories in 2009 and 2011.

On the Olympic level, Pellegrini won silver in the 200 free in Athens just days after turning 16, and then followed up with a gold medal win four years later in Beijing.

After that World title in Budapest, Pellegrini claimed she was retiring the 200 free from her event lineup (at least at major competitions), and stayed true to her word this year as she only competed individually in the 100 free (placing 5th) at the European Championships in Glasgow.

Fede is the greatest female 200m freestyler this century.

How is this downvoted? It’s kinda just true. She has it down and hasn’t had it down for a long time

Supersuit world record. Only one Olympic gold medal in the event, same as Schmitt and Ledecky, both of whom beat her–and the majority of her World Champs medals were minor medals. Makes it debatable.

Your timely reminder that London 2012 was Allison Schmitt’s only individual LC global title, and one of only 2 global LC medals she has won individually.

Pellegrini is a 3x world champion in the 200fr, medalled at 6 straight world championships in the event, Olympic Champion and WR holder.

I love Schmitty, her 200fr in London was the best female 200 of all time imo, but she is not in the same bracket as Pellegrini.

Pelligrini is the women’s 200free queen!! Yes, Ledecky and Schmitt each won an Olympic title, but Pelligrini won silver in 2004, a gold in 2008, placed 5th in London and in Rio an extremely close 4th (her only 2 years off the highest level of international competition, yet she did win the 2012 and 2016 European titles in this event). Since 2005, she has been on all the world championship podiums (3g3s1b) (the only person along with CVDB to be on 7 consecutive podiums) and she has won a title in this event at every major meet. She has won an Olympic title, 3 LC world champ titles, a SC world champ title, a Universiade title, 4 LC European titles,… Read more »

Every Phelps record was set in a now banned suit

“Only one Olympic gold in the event”. Who has two Olympic golds in the 200 free, if you please? She has one gold and one silver, same as Thorpe and VDH

From a statistical standpoint, of the top 25 all-time top performances in the 200 Free LCM event, Ledecky with 7 already has more than Pellegrini’s 6 and Sjostrom’s 5, and Ledecky beat Pellegrini two out of three times they faced each other at the Olympics and World Champs. Doesn’t prove anything, just presenting the stats.

Ledecky beat an ageing pellegrini which is expected. Pellegrini,s longetivity in the 200 free is unparalled on the women,s side

Well, if you look at the top 20 performances, it’s a tie between Pellegrini, Ledecky, and Sjöström, with 5 each. ^_^

And in the red corner, out of Mirano Italy, we have the World Record holder and reigning World Champion, Federica “The Queen” Pellegrini !

Let’s face it, she is the best.

Sometimes the company you keep is important. It will be interesting to see if Pellegrini’s legacy is diminished by her six-year long relationship with Magnini, who is caught up in the Italian criminal probe of a “nutritionist” who was trafficking in anabolic steroids and other PEDs.

Agree, said it a million times, but one season doesnt make a legend, let alone one swim. Federica won individual senior medals in the 200fr over a 13 year span. That’s remarkable. She is an absolute legend, and I am with Billabong, the best of the century so far.

I agree. She was great in all suits and for a very long time!

Federica Pellegrini had rank #1 only in three seasons where two of them are from suits era.
Among 10 best performances two of them are in her name. Same as Schmitt and Ledecky. The leader is Sarah Sjostrom with three entries. Both of Pellegrini’s results are from 2009.

Allison Schmitt has won 1 individual global LC title in her career. Can we stop obsessing over times? It was a remarkable swim, but as much as I love her, it doesnt bring her close to what Pellegrini achieved.

Pellegrin’s reign was about three years and ended basically in 2011. She was still around after that and was taken seriously by her competitors but it was time of Schmitt, Franklin, Sjostrom and Ledecky. Almost all predictions during these 6 years period gave her the second role. Her win in Budapest with respectful 1:54.7 was a surprise and kind of a gift from Ledecky who day before and day after this final race was significantly faster. What’s happened to her at last fifty in final race where she was the slowest among finalists is still an unanswered question. It’s true that during her 14 years sport career she was most of the time in contest for the place on podium.… Read more »

4 gold and 4 silver at global championships in the 200m free spanning 13 years.

That is actually 4 Olympics and 7 world championships: 11 meets.
4 gold, 4 silver and 1 bronze in 200 free.
Is it great, or good or so so ?
Yes she competed for a long period of time and definitely made a history by this longevity. Was she successful? Most of the time. Does it qualify her the greatest Queen of 200? That is the matter of taste in choosing criteria to measure the greatness.

It is not being compared to other events, where a better record than that is required. At issue is 200 long course. I read every post and the pro-Pellegrini argument was easily superior to other versions

She’s good, even great, but the “greatest female 200m freestyler this century” is a bit hyperbolic.

Okay the, so instead of just saying that, how about make an argument for somebody else?

The arguments for Ledecky & Schmitt have been made, and have fallen short (for now in KL’s case). Who else is there – Manaudou? Who again falls short.

I really don’t see the debate, her trophy cabinet and longevity says it all. Her global LC cabinet in the 200fr alone…

Who else comes close?

I know that she isn’t an American, but I fancied using some American style hyperbole, because the facts justified it. I could always revert to British understatement if you’d prefer…. “Federica Pellegrini, World champion, Olympic champion and the fastest women ever over the 200m freestyle, is a good swimmer”….Now that sounds utterly ridiculous!!!!

It is interesting that this consideration of retirement by Pellegrini comes in the wake of the criminal probe and doping ban faced by her ex-boyfriend, Italian swimming champion Filippo Magnini, with whom Pellegrini was in a relationship for six years (2011-17) and who lived together.

I noticed that in the interview cited here, Pellegrini says she and Magnini are now totally on the outs after he took things from her/their apartment. Was she forced to testify against him in the Italian criminal/doping probe or was she herself ever implicated? Could she have lived with Magnini for six years and not have known of his activities?

There is no criminal probe against Magnini, and the name of Federica never came up in any wiretap or other document. She is simply not implicated.

Even though retired from the sport, Magnini is facing a possible 8-year ban from swimming based on findings of Italian anti-doping prosecutors in a case involving the trafficking of anabolic steroids from China by a nutritionist. I would see no reason that Pellegrini’s name would be on a wiretap since communication-wise she lived in the same abode as Magnini, and find it somewhat lacking in credibility that she would know nothing of Magnini’s activities. Her possible sudden retirement–citing unspecified reasons “outside the pool”–just fuels speculation.

She seemed to be better at the Worlds than at the Olympics recently. She was out of the medals in London and Rio, but swam better in Budapest 2017 to win.

I think only she and Hosszu are still around from 2004, which says a lot for her longevity.

Yes, but in the last six years of her career, Pellegrini was living with Magnini.

Is Dana Volmer still considered active? She took some time off after having her second child, but I haven’t heard if she is actually done competing.

Vollmer was just in the news about getting back into training. And yes, she would be from 2004. (Won Gold on US 4×200 Free Relay). And actually if you want to date back even farther, Vollmer was on the US team for the 2001 Goodwill Games (not a major international event like Olympics and Worlds…but DeBruijn and Thorpey were there!), if she hangs around, there’s literally nobody left from her 1st generation of National Teams (actually there hasn’t been for quite awhile…Pellegrini was in the final with Vollmer in the 200Free in Athens but that’s 3 years after). Judging from Nationals results, apparently nobody aside from Kelsie seems too intent in making a charge at her being at least #2… Read more »

Apparently she is training in Denmark with Jeanette Ottensen and both seem to be targeting Tokyo 2020.

“Around” is a good word you are using to describe the situation.