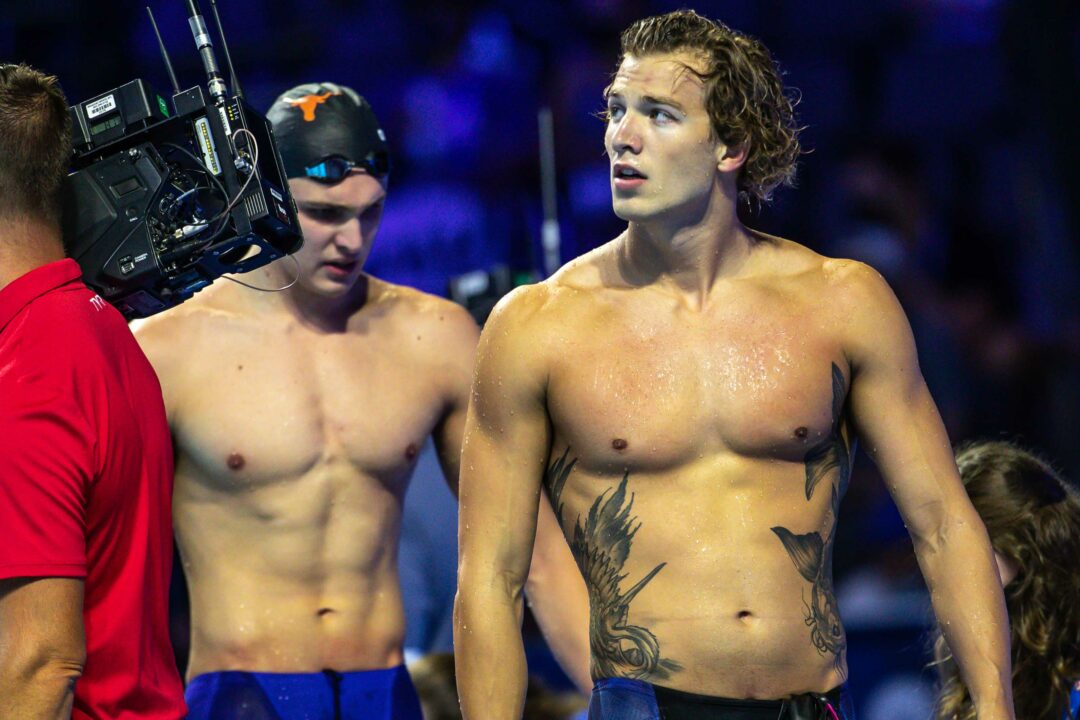 The Longhorn men have put someone on each US Olympic free relay since 1988, and while that streak is probably done for the 4x100, the 4x200 legacy endures. Current photo via Jack Spitser/Spitser Photography

Eddie Reese arrived at Texas in 1978. From there, it only took three seasons for the Longhorns to win a NCAA championship, the first of a legendary 15 titles stretching across 40 years. Building on that success in college competition, a Longhorn represented the United States at the first Olympics at which the USA competed after Reese arrived, as Rick Carey won gold in the 100 back, 200 back, and 4×100 medley relay in 1984. But it’d be another four years before Longhorns started doing what they’ve been known for ever since then — being a fixture on the US free relays.

The 4×200 streak continued last night, when alum Townley Haas and current Longhorn Drew Kibler finished 2nd and 3rd in the men’s 200 free. Haas’ 2nd-place earned him an individual swim for the second-straight Olympics, and Kibler locked in a spot on the USA 4×200 free relay team. Haas swam on the finals squad in 2016, scorching a 1:44.14 split, while teammates Clark Smith and Jack Conger earned gold medals with prelims tonights.

And while Texas usually is known as being a mid-distance factory, the streak of a Longhorn representing the USA on the 4×100 free had, until now, lasted as long as the 4×200 streak.

Barring some sort of very strange circumstance, that streak will end this summer, as no Texas men advanced into the final of the 100 free tonight. Maxime Rooney, who transferred from Florida to Texas the summer of 2019 for his senior year and who has a lifetime best of 47.63 from that summer, finished 11th overall in the semis with a 48.86. Kibler finished 14th with a 49.02 after going 48.72 in prelims. Haas, who swam on the 4×100 free relay at 2017 Worlds, and Daniel Krueger, who tied Kibler for 2nd in the 100 yard freestyle at NCAAs this year, didn’t make it beyond prelims this morning.

We put “likely” in the headline, as relay lineups are at the coaching staff’s discretion, leaving open a very small possibility that Haas or Kibler, or perhaps Rooney if he makes the team in the 100 fly, could still end up on the 4×100 free relay next month, but that is a highly improbable scenario at this point.

The (likely) end of Texas’ 4×100 free streak coincides with the official end of Reese’s tenure as head coach. He announced in March that he would be stepping down as head coach after these Olympic Games, but that he intends to stay on deck at Texas in a “coach emeritus” role. But, despite the Longhorns lack of 100 free success tonight, Reese’s — and the Longhorns’ — freestyle legacy is likely to endure. Haas and Kibler should still be swimming three years from now, and 19 year-old Carson Foster finished 8th in the 200 free final in a very close race, so he also figures to be in the 4×200 conversation on the road to Paris 2024.

Here’s a table showing all of the Texas swimmers who have swum on USA Olympic free relays during Reese’s tenure.

Note: Gary Hall Jr. only swam at Texas for one season, and didn’t compete for any other NCAA team.

I think it’s even weirder when you see how many Texas-related athletes were in the A-final of the 100m freestyle at the 2019 Summer Nationals, if you had told me that none of those guys would qualify for the A-Final at Trials, I would’ve said you’re crazy.

Just off the top of my head it was Rooney, Farris, Jackson and Krueger right? Between them and Kibler and Haas I thought Texas would send 2 people off to the relay

Eddie and Wyatt did a good job with this strange trials. The Foster boys are going to swim 5 finals between them, also David Johnston had a really good showing. Bentz and Townley made it individually and Licon has made two finals. And Kibler might be the most impressive having never broken 147 and dropping to 145.9. And whoever is the Texas coach, he’s going to have 7 returning swimmers who swam at night at trials. Long live Eddie!

Agree – Texas has been solid – Newkirk also did well. I was hoping to see something faster from Krueger though.

Carroza and Crane also made top 16

Not magical though as in previous OTs. The only magical swim was Kibler’s 200 free (although Townley’s post-race interview was predictably magical). Could say the same about the Cal men. For all the talk about the pandemic affecting the old guard, I’d say it hit the NCAA teams pretty hard, too. 2016 NCAAs were on fire, and those guys from Cal and Texas went nuts at OTs. Not so this year.

I’m really rooting for Licon in that 200BR! If I remember correctly, he wasn’t a top-tier recruit out of high school – really came into his own at Texas.

Will was good in high school. He was on the National Jr Team and competed at Jr Pan Pacs. Eddie’s done a great job with him, but he already had international junior level experience going into Austin.

Amazing legacy for Texas in these two relays. Thanks for the research. But we’re not done with Eddie retiring, we’re just turning to the next chapter in Texas Men’s Swimming & Diving!

It’s over after Eddie. It’ll go the way of the football team. A&M will end up being the bigger Texas swimming powerhouse.

What happened to 5ate Jackson!?

When did he decide not to go to the meet?

Any rumors regarding the new head coach? Only names I’ve heard are Wyatt Collins and Brian Schrader. Schrader was on the ‘91 NCAA championship staff.

Supposedly they’re announcing it after trials

Schrader will ruin that program in 6 months if they hire him, so I hope he’s not on the list

I think Haas or Kibler might get a prelims swim

That would be pretty unjust. It’s not like they opted for other events—they swam it and they didn’t final. Unless either of them looks like a 48 very low or better in training camp I can’t see an argument to use a guy that doesn’t guarantee at least sub 49 flat start just to save a swim for the third place finisher who isn’t even swimming the individual event. If Adrian makes it in the 50 I could see him maybe getting a shot, but he beat both those guys and has an unimpeachable relay record.

I definitely wouldn’t mind seeing Haas unleashing another 47.4 relay split, but, objectively, I can’t think of an obvious reason not to just have the 3rd-6th place guys swim prelims.