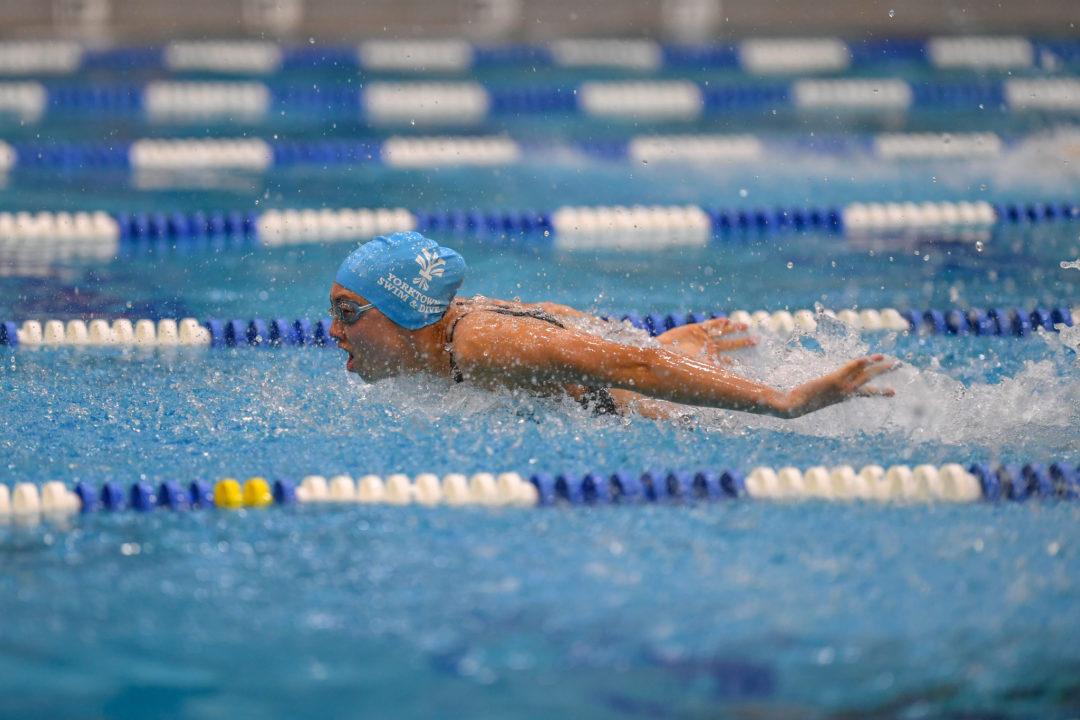 The Virginia Northern Region 6A champs have historically seen some really fast swimming, and this year is no exception, as sophomores Anthony Grimm and Victoria Huske broke meet records previously held by some big names. Current photo via Courtesy of Eugene Soh

As Northern Virginia’s 6A regional championship was set to get underway Saturday night, the in-house DJ – always a welcome addition at swim meets – played the pulsing 2009 song, “Forever.”  With Chris Brown bellowing about “moving at the speed of light,” the song was an apt choice. There were numerous swims that seemed to be conducted at the aquatic equivalent of light speed – resulting in meet records that just may endure . . . forever.

Among scores of standout swimmers, in the always-competitive championship meet, there were two who stood out from the rest: Anthony Grimm of Oakton and Victoria Huske of Yorktown. Both sophomores, they are on track to join the ranks of numerous other swimming standouts to have emerged from Northern Virginia. Let’s run through the highlight reel:

In the meet’s first event, the 200 medley relay, Oakton’s squad of Grimm, Nick Higham, Kyle McCleskey, and Graham Evers finished first in 1:31.38 – setting a new regional record in the process. Grimm’s backstroke leg was a mind-bending 21.08. To put that in context, it’s faster than four of the 200 medley “A” final backstroke legs at last year’s NCAA championship meet.

In the very next event, Yorktown finished first in 1:43.05 – also setting a new regional record. While Mary Kate Reicherter, Kayle Park, and Caroline Burgeson were fast, Huske’s butterfly split – 23.38 – was in another dimension.

Grimm followed with a win in the 50 free (see the race here). His 20.13 took down the regional record held by University of Michigan junior James Jones. He later used his extraordinary underwaters to deliver a sizzling 46.63 victory in the 100 back (see the race here), breaking a regional record held by  current University of Texas senior (and fellow Oakton High graduate) John Shebat.

In his final swim of the evening, Grimm could not quite close the gap in the 200 free relay, with Oakton finishing second to the Washington & Lee quartet of Kai Green, Adi Kambhampaty, Lachlan Flatin, and Jack Mowery. But Grimm made it close – uncorking a 19.64 split.

Huske’s final swim was anchoring Yorktown’s 400 relay squad (joined by Natalie English, Emily Larsen, and Kayle Park). She entered the water in lane 1 trailing Oakton by more than two seconds. After the first 50 she’d made up nearly the entire deficit, and she never slowed down – finishing with a 48.24 split and propelling Yorktown to victory. (See the full race here.)

Grimm and Huske were not the only swimmers to deliver fireworks – and new records. Lexi Cuomo, a University of Virginia commit from Centreville, won the 100 fly and her 52.95 also took down a record held by Cassidy Bayer. Cuomo also blazed to victory in the 50 free with a 22.99. And Anna Keating, a junior at James Madison who has already committed to the University of Virginia, knocked more than a second off the regional record she set last year in the 100 breast. Her 59.83 (see the race here) was just off her time in the conference championship meet, which was the 8thfastest all time in the 15-16 age group.

The closest race of the night came in the girls 200 free relay. Oakton and James Madison were .05 apart halfway through the race, and .02 after three legs. Oakton’s Brynn Curtis and James Madison’s Elizabeth Kuhlkin then battled stroke for stroke and finished in a tie – 1:34.61. They broke the old regional record by more than a second.

There were two notable upsets. The first came in the 200 IM, when Adi Kambhampaty, a junior at Washington & Lee (and brother of MIT freshman swimmer Jaya), knocked nearly three seconds off his best time and won the race in 1:52.85, from way over in lane 7. In the 100 back, Sarah Boyle, a senior at Westfield and a Notre Dame commit, delivered an outside smoke from lane 1 – knocking more than three seconds off her seed time. (Prelims, scheduled for the night before, had been cancelled due to weather.)

The Oakton boys, powered by Grimm, Gyenis, and others, won the team title – and celebrated with a plunge into the pool. (See the video here, complete with a flip off the blocks by Grimm and a flawless belly flop by some brave soul.) The James Madison girls won for the third year in a row, with depth once again being the difference, as Keating was the only individual winner.

There could be more fireworks ahead, as the state championship meet is February 16, and both Grimm and Huske are likely to be tapered (a detail neither of them bothered with for the regional meet). Huske is expected to swim her best event, the 50 free. At last year’s state meet, she exploded for a 22.39. In December, she delivered a 22.06. That puts her in striking distance of the 15-16 national age group record (Gretchen Walsh, 21.82) and the national high school record (Abbey Weitzeil, 21.64) – and would have put her just outside the “A” final at last year’s NCAA championship meet. As for Grimm, he may slot the 100 fly into his regimen, where he is just as proficient – if not more so – as he is in the 100 back.

The dynamic duo – who were jointly interviewed by SwimSwam after the meet – will help keep the eyes of the swimming world on Northern Virginia for the next few years, if not . . . forever.

Does anyone know the fastest 50 back for a high schooler? I’m having trouble finding Murphy’s best time (I think he would have the record)

Looking at the USA Swimming times database and it looks like Murphy’s best 50 back as a high schooler was done at the Florida 1A Champs back in November 2012, which was a 21.09 split. So unless someone else has been faster than that while in high school, it is highly likely that Anthony Grimm just threw down the fastest 50 back split from a high schooler in history. As a sophomore.

thanks for sharing, amazing accomplishment!

Are there videos of all the races? Why are only a few of them linked here?

Kat – These are all we know of. There’s a chance there are more available out there from other people who were at the meet.

Brynn Curtis is an Auburn commit