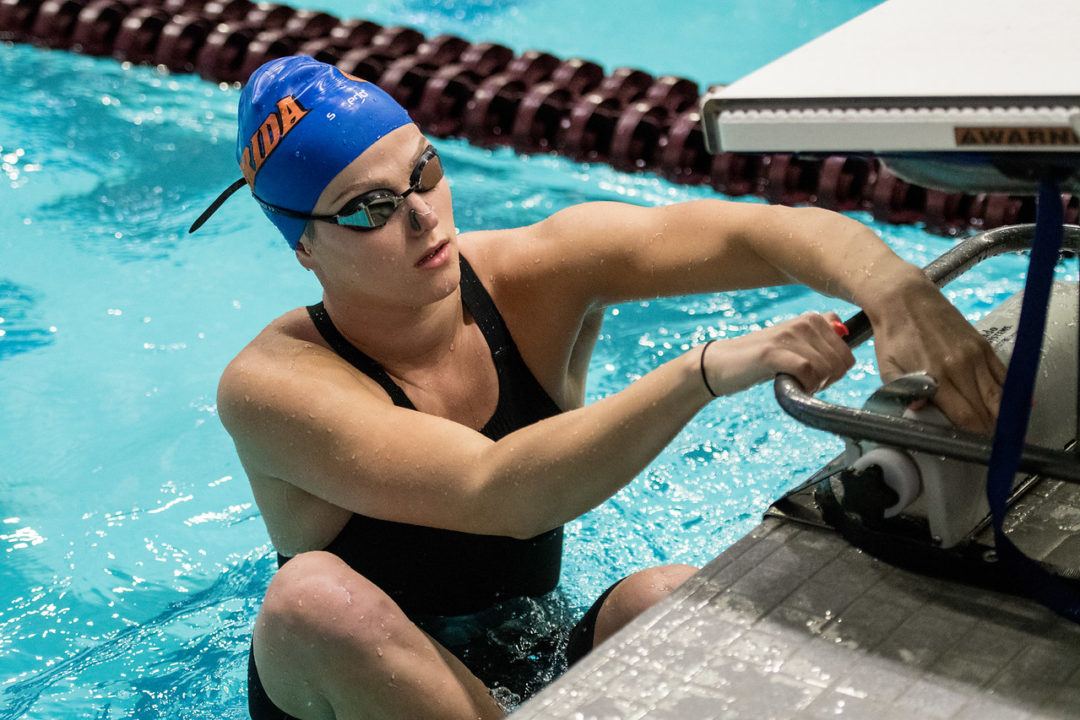 Florida hosted Tennessee on February 2nd, coming out on top in both the men’s and women’s meets by a huge margin. Florida’s Emma Ball posted some impressive relay splits, starting with a 23.97 to lead-off the winning Florida medley relay. She was followed by Vanessa Pearl (27.37), Sherridon Dressel (23.54), and Isabella Garofalo (22.64), respectively, posting a final time of 1:37.52. Tennessee’s A relay was fueled by a stellar breastroke leg from Nikol Popv, coming in at 26.99. Ball went on to post a 48.88 on the 400 free relay, which was the 2nd fastest split in the field, behind only Erika Brown (48.33). Ball’s best flat start 100 free comes in at 49.93 from November of 2017.

Did not see this absolute beatdown coming after the Vols terminated Georgia last week. Hard to explain but a minor hiccup in the GirlVol and BoyVol run to the podium as we still can win BOTH SEC TEAM TITLES!!! Looked sorta like the HeGators and SheGators rested in a desperate attempt to untrack the Big Orange Tennessee Diving and Swimming Machine. Of course UT did not have their super stars divers ZipZheng-Fung-foo and Rub-em-out Rubadue who woulda won 1m, 3m and 10m which would have made the meets much closer. Were the Gators suited, clipped, shaved or what???

Or maybe Florida just whooped Tennessee. Look I like a few people from both teams. Heck I’m from Tennessee but root for Florida. If Tennessee wins the men’s sec title I will eat my shoe with a side of ketchup

If Tennessee wins the SEC title it’d be unexpected. But when you break down the numbers, I’m not sure it’s “eat my shoe with a side of ketchup” unexpected…

The swimming only Swimulator has Missouri well ahead of everyone, then A&M, Florida, Tennessee, and Georgia within 100 points. And Tennessee has the best diving in the conference. If we’re presuming Missouri continues their usual pattern of pushing pretty hard through SECs then that becomes a really tight 5 team meet.

Please explain the Swimulator. Does it have the South African Mid-Year Flash included for TN Volmen?

suited, clipped, AND shaved for sure!

The truth is the Vols swim great every year on Senior Day. Either Georgia or Florida get the meet of the year on that day. The Vols do anything and everything needed to say goodbye to their Seniors and win the meet. The difference between the Gators, Dogs and Vols is on Senior Day the Dogs and Gators stand up and race after doing practice ( long 90 minute, 6,000 meter workout.) If you think Anthony would shave or suit up for a dual meet, you don’t know swimming. If you think Jack would taper for a dual meet three weeks before SEC’s, you don’t know swimming. Kudos for the Vols beating the Dogs on Senior Day, it is what… Read more »

The data doesn’t support what you say. Tennessee men were thumped by Florida on senior day last year. The year before, both the men and women were thumped by Georgia on senior day. In fact, this was the first year since 2012-2013 that Tennessee earned a sweep on senior day – and usually the meets are lopsided against them. This year, the wins over Georgia were fairly close, especially on the men’s side, and this is a down year for Georgia and an up year for Tennessee – Tennessee would be favored in all scenarios where both teams entered the meet with the same amount of rest. The Tennessee women should beat out Georgia and Florida at both SECs and… Read more »

None of the guys were suited. Ball was suited the whole meet, Pearl was suited for the 100 breast and 200MR only, and Fertel was suited for the 200 free. This was primarily to help decide third events for SECs. It would not have affected the score. 2nd place in the 200 was also a Gator, and Pearl took out the 200 breast faster than the second place finisher swam in the 100. Tennessee had third stringers on the men’s and women’s side suited.

Coach P admitted the She-Gators had 5 swims suited and I dun seen 1 SheVol with suit on the video. Agree with your other comments, although not sure this is a HeVol up year. After SECs we will gauge how this years FR do versus last years SR class for the mighty TN barefootboy HeVols. Suffice it to say it is a down year for HeGators and UGADawgs.

UF men were not suited. They suited a few girls for one or two events to see what their third event might be for SECs and what their relay possibilities would be. Pearl was suited for the 100 breast and 200 MR, Fertel was suited for the 200 free, and Ball was suited for all of her events. It wouldn’t have affected the outcome as the 2nd place finisher in the 200 was from UF, Vanessa Pearl took out her 200 breast faster than the second place finisher of the 100 swam so she still would have won without the suit, and Tennessee won the relays. Tennessee’s third stringers on the men’s and women’s side were suited.

Rooney won the 100 in 43.4 and Baqlah was just behind at 43.5. Kieran Smith also went 1:35.0 in the 200 behind Baqlah. This was a FAST men’s meet. Florida looks good for SECs. The women are going to surprise a lot of people. Vanessa Pearl is a major game changer, and Sherridon Dressel is on a new level which is going to amp up the relays in a big way.

Maybe or maybe UF rested big time for the meet? Maybe TN will come back at em with a vengeance like a spider monkey all jacked up on Mt Dew!!!!!