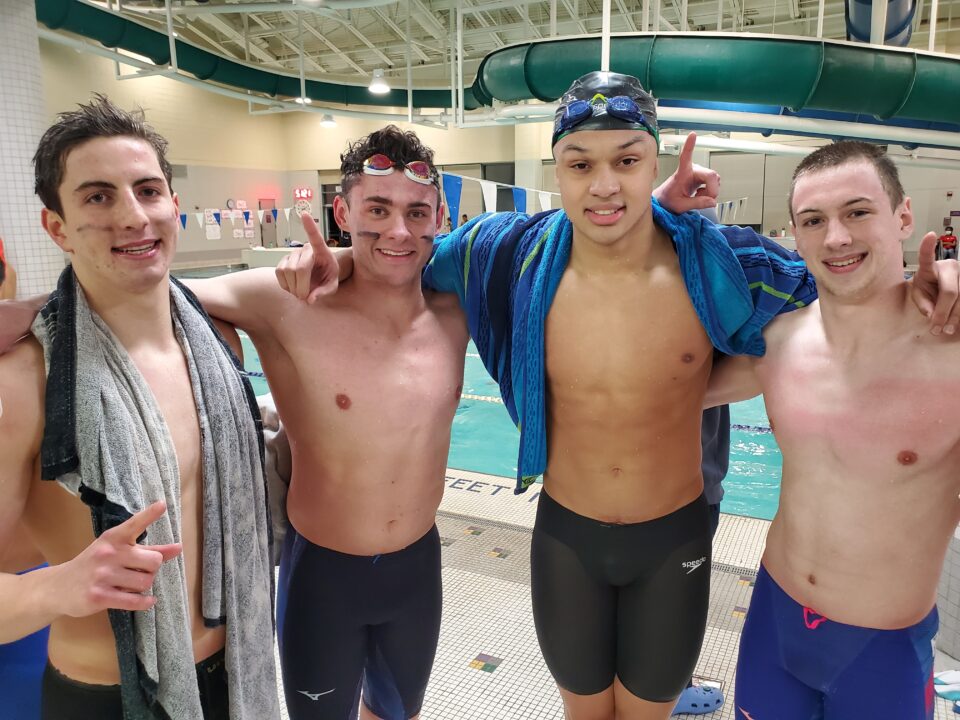 Stone Ridge won the girls' portion of the meet, while the Churchill boys' surprise came in the form of a team victory by a margin of just 2.5 points. Current photo via Matt Rees

Among Winston Churchill’s countless talents – painter, author, and yes, wartime leader – one of the lesser-known was swimming: He competed on his high school team and in the 1930s he had a heated pool constructed at great expense in the backyard of his fabled country house, Chartwell (see him splashing in the pool here).

Given this history, Sir Winston would no doubt welcome the outcome of Saturday’s “Metros” meet. The boys swim team at the Potomac, Maryland high school bearing his name scored a very narrow – and very surprising – victory over Gonzaga, a longstanding high school swimming juggernaut (see the victory plunge here).

Metros brings together a jumble of public and private schools from Maryland and Washington, DC and always features some of the nation’s fastest prep swimmers – if not the fastest ever: Katie Ledecky swam at the meet, as did one of her Olympic teammates last year (Phoebe Bacon) and in 2016 (Jack Conger). And all three of them set national high records at Metros meets. (Read about four of those records here.)

This year’s crop of swimmers included several Division 1 commits and one member of the USA Swimming Junior National Team. As expected, the swimmers blazed through the water – there were two dozen automatic All-American times and five new meet records. Also as expected, Stone Ridge won the girls portion of the meet (see the victory plunge here), just as they did in 2020. Churchill’s surprise came in the form of a team victory by a margin of just 2.5 points, after recording zero wins in individual or relay events.

The fireworks started with the first event, the boys 200 medley relay, where a Gonzaga quartet – J.T. Ewing, Collin McKenzie, Mac Marsh, and Aiden Bond – delivered a sizzling 1:30.28. They won by nearly two seconds (see the race here) and chipped nearly 1.5 seconds off the record that Georgetown Prep had set in 2020. The first three of those swimmers are seniors and have high-level swimming in their respective futures: Ewing and McKenzie are both headed to NC State while Marsh is bound for Cornell.

Next up were the girls, and Stone Ridge made an early statement, winning by more than two seconds, powered by Melina Anschutz, Cameron House, Eleanor Sun, and Erin Gemmell. Sun, a junior and already committed to Princeton, delivered the fastest fly split (24.88) and Gemmell, the SwimSwam #10 recruit in the class of 2023 and committed to Texas, delivered the fastest free split (22.32).

In the girls 200 IM, Sophie Duncan, the #17 recruit in the Class of 2022 and a Stanford commit, coasted to victory in 1:58.90 (see the race here). In her 100 fly race, she was up against Sun as well as Carly Sebring, an Auburn commit. The clash of the titans did not disappoint, with all three swimmers going under their prelims time. Duncan was in fourth at the 50 but came home with a speedy 28.37 back half and just managed to tie Sebring for first (see the race here).

When it came time for the 100 back, Sebring got her outright victory in 54.38 (see the race here) – capping a celebrated Metros history that has seen her racking up victories since her freshman year.

Other individual winners included the following:

But Churchill held on for second, allowing them to eke out the team title – an outcome their late namesake just might have labeled “their finest hour.”

Not this meet, but SwimSwam should report the Virginia VHSL championship meet results – particularly Division 4 – a HS freshman (familiar name) went 46.8 in the 100 fly and 19.8 in the 50 free

Other Churchill alumni who were Metros stars (and Olympians): Dan Veatch and Mike Barrowman.

Metros has always been one of the fastest meets in the country. Glad I could swim there with Ledecky and Bacon