The Joys of Summer League Swimming Captured In A New Documentary 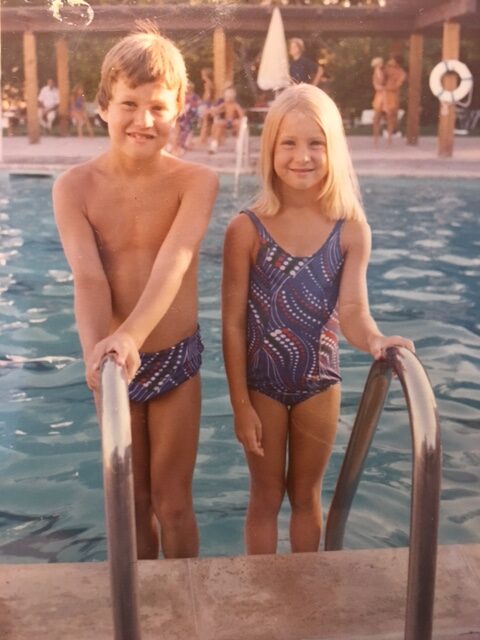 Matt Rees is a writer and swimmer who lives in McLean, Virginia.

“I felt like a summer league swimmer out there.”

That was Michael Phelps reflecting on his first meet after coming out of retirement in 2014. The comment captured one of the essential truths about American swimming: the real fun is found in summer league.  That message, and much more, comes through loud and clear in a gripping new online documentary, “Swim County USA,” which every swim fan should watch.

I had the good fortune to experience summer league swimming through Springbrook Pool, in Lafayette, California, from 1976-82. I loved the competitive environment, and the coaches (Ryan Harrison! Peter Cool!). But most of the memories I cherish involve friendships, field trips (“Meatballs” movie night!), and idling away time at the pool, with no greater worries than . . . well, with no worries at all.

While summer league swimming reportedly attracts more kids than any other sport in the country, it’s never attracted much coverage from media outlets. Diehards like me have had to make do with 1976 clips from another Lafayette, California team, LMYA, which can be viewed here and here (thanks to my old friend Brandon Franklin for getting them digitized). There’s also a lovely year-end retrospective on the 2006 season of Chesterbrook in McLean, Virginia (see here). (Don’t waste your time trying to find the forgettable 1979 film “Swim Team.”)

Thankfully, summer league swimming has finally received the treatment it deserves. “Swim County USA” captures the essence of summer league swimming in just 32 minutes, focusing on one of the sport’s hotbeds – Contra Costa County, in northern California. (The county was the childhood home of three-time Olympian Matt Biondi, and while he set multiple world records, he never set one of the celebrated county records.)

Drawing on interviews with swimmers, parents, and coaches, as well as archival footage, “Swim County USA” can be enjoyed by swimmers and non-swimmers alike. It’s not so much about competitive swimming – it’s actually a story of having fun, making friends, and growing up.

An interview with Chris Conner – Writer, Director, and Producer of “Swim County USA”

Why did you make this movie?

Although I grew up swimming on a summer team in Ohio and also in high school, it was nothing like what I experienced here. The sheer number of teams in Contra Costa County, the long tradition, and the number of connections in the community were stunning to me. My wife grew up swimming here for Pleasant Hill Aquatics before going year-round and our kids had been on the team at Indian Valley, in Walnut Creek, for several years. At the end-of-season awards night in 2018, I was taken by the positive vibe between the kids, the coaches, and the parents. I thought, “How can we capture this feeling? It should be movie. I guess I should do that.”

What made you want to tell stories about swimming?

I had started a business-related interview podcast about three years prior, but in 2018 I wanted to tell more narrative stories. Flip Turns was a podcast about how people’s lives had been changed by swimming. I really enjoyed putting those stories together and they were well received. I was sort of primed to do something when the idea for this movie came to me.

Where did you swim summer league, what was your best performance, and are there any other special memories you have from summer swimming?

I swam for Shady Hollow Country Club in Massillon, Ohio. The best performance I recall was a 26.3 50-meter (short course) freestyle.  My friend Doug (DB) Dowd and I once won a relay with just the two of us. We were big (cocky) fish in a little pond.

What was the biggest challenge of making the movie?

The hardest part was narrowing the topic, which really didn’t happen until very late, but also somewhat organically. There are so many aspects to this community that I wanted to share. First of all, the scale of it. Then each team has its own traditions. There are all the activities that go on away from the pool. And for me, a big part of it is the social aspect among the parents. We spend a lot of time together on Wednesday nights and Saturday mornings in the summer. And then we may not see each other until next May. I always say, “Happy New Year!” the first time I see someone on deck because for me, that is the start of the year.

So what became the movie’s central theme?

I took a road trip last summer with DB Dowd, my best friend from our days swimming in the summer at Shady Hollow. We went to the US Masters National meet in North Carolina. (See how long these friendships last?) I was explaining what I thought was so awesome about our unique community. He said, “They’re learning how to be adults.” That conversation crystallized the story in my mind and helped a lot with putting the story together in the edit.

Were there any big surprises in the making of the movie?

I made a lot of lucky connections when I started talking about my idea. There were people I spoke to that I didn’t know had been involved in rec swimming in the past who said, “You should talk to so and so…” That happened with a few people that led to some key characters in the film. It illustrated the breadth and depth of the connections in the local swim community.

Is there one swimmer who’s featured who embodies the spirit of summer league swimming?

I could highlight a different aspect of rec swimming in every young person I talked to. But Jake Freels struggled to put a dive together for two or more years. He never gave up, became a good swimmer, and formed a lifelong bond with his team and especially his coach, Andrew Martinez.

Do you have a favorite scene or interview in the movie?

My favorite scenes are the archival footage from the 1960s and 70s. There were some hilarious scenes I didn’t include in the film that you would never see today, like a stroke and turn judge who was smoking a cigarette and the shapely bikini birthday cake for a young coach.

What do you want audiences to take away from this film?

I love swimming. I love watching fast swimmers. But there is so much more for anyone to be gained regardless of how good they are. The continuity of the experience from year to year and generation to generation makes it special. I think the magic of it is in those early teenage years, kids are seeing the older teens and college kids who come back to coach interact with adults and being valued by their community. At the same time, they realize that the younger kids are beginning to look at them as role models. That combination has a very positive effect on them and the choices they make.

I grew up swimming on Walnut Country (Concord Ca/CoCo County)swam through college. Coached for several years after in the county too, earning a “county” time or even better placing at county was a huge accomplishment. (I can think of some former US national team members who got their start at county).

is this the same movie that was being worked on during the summer of 2019? I know the producer reached out to some of us as we were working to save the summer rec team at Walnut Country.

Yes it is the same one.

I’m a Del Amigo Dolphin alum from the mid/late 70’s. This truly brings back magical memories of pedaling our bikes for morning practice, spending the whole summer at the pool, wearing our Speedos under our clothes all summer, never showering (chlorine was good enough), binging on candy at the swim meets, “making County”. Good times.

Three-day meets in 100-degree July heat, arriving at the pool at 7:00 am for warmups and sometimes not getting out of there until 8:00 or 9:00 pm. Playing cards in the tent with teammates in between events, then when we hit our teenage years having summer romances with teammates and/or swimmers from opposing teams. Hanging out on the pool deck until the coach yelled at you to get out of the hot sun and rest for your next event. Great memories.

Irvine also has a famous swimmer league, Amanda Beard and Ella Eastin were in the Irvine one.

You don’t quite get it. Contra Costa county has like 65 summer swim teams.

Chris, I can HARDLY wait to see this. So happy you made this labor of love!

This is the feel-good film of the Spring – just in time for the Summer Rec season to begin. Reminds me of the great memories as a swimmer (PHA) and a parent (IVST). Great job Chris!

>Contra Costa County, in northern California
Walnut Creek represent <throws W & C hand signs>
I notice this doc is available on April 1st. If that isn’t an April Fool’s thing, I will be watching.

I had never experienced anything like Summer Swim before my 10yo niece tried it in 2018, even though I was a collegiate athlete & worked in sports for many years.

It really was magical – for the kids, the adults, the community!

The quote in the article captures so well how the multi-age & gender dynamics add a unique aspect to the already positive life lessons through sports.

I look forward to watching this Chris Conner.