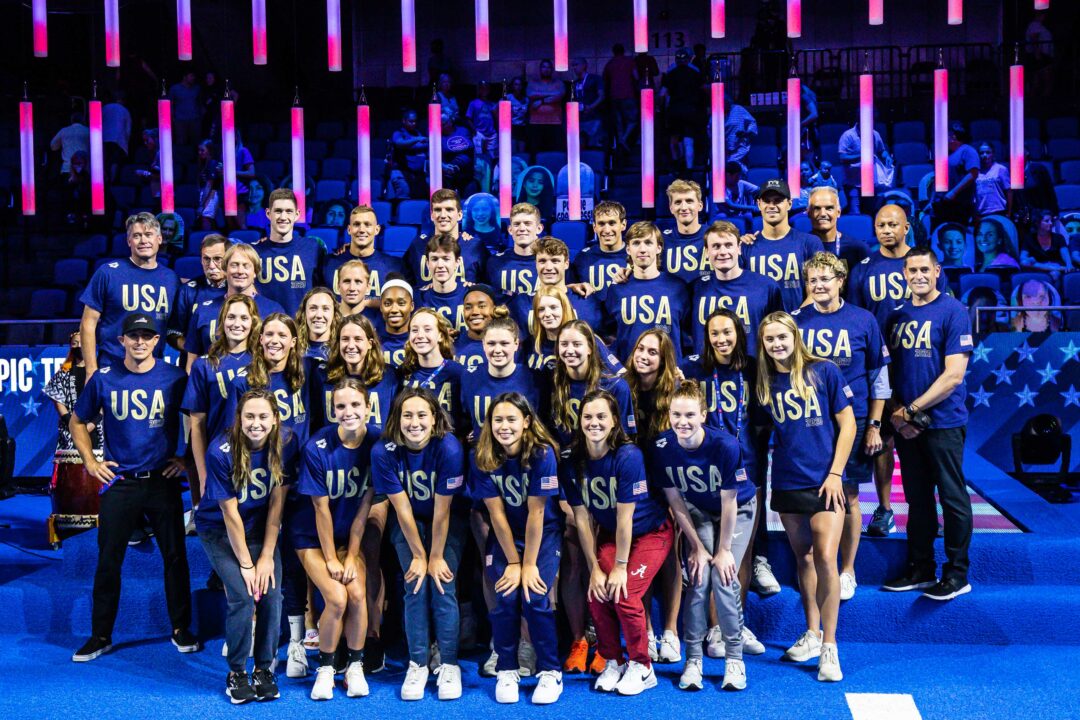 Check-in here to see who's racing at the Pro Swim Series, who's prepping for NCAA's, who's retired, and who we're not too sure about. Archive photo via Jack Spitser/Spitser Photography

March 2022 is a busy month for swimming. As NCAA conference season begins to wrap up and teams prep for the NCAA Championships, pro athletes from all over the country are traveling to Westmont, Illinois to race at the Pro Swim Series.

In fact, 37 out of the 50 Olympians who represented the USA at the Tokyo Olympics are accounted for this week at either the Pro Swim or being in throws of NCAA Championships season.

22 of them are entered to race in Westmont this week including gold medalists Caeleb Dressel, Lydia Jacoby, and Katie Ledecky, as well as Lilly King, Annie Lazor, Ryan Murphy, and Hali Flickinger. The psych sheets are not very deep at the meet as many events have only 2-3 heats worth of entrants. But the Tokyo Olympians, along with other stars such as Leah Smith, Cody Miller, Melanie Margailis, and Kelsi Dahlia are sure to make it an exciting meet.

Read more about the meet here, including 5 major storylines to watch out for.

9 American Olympians on the women’s side and 9 on the men’s are currently racing for their NCAA team. All of them but Bryce Mefford, who will race for Cal at Pac-12s this week, have wrapped up their respective conference meets and are prepping now for NCAAs. The women’s national championships will take place from March 16-20 in Atlanta, while the men will race from March 23 – 26.

Pre-selection psych sheets for the women’s meet indicate that all 9 collegiate women can expect to race at the meet including projected national champions Emma Weyant, Alex Walsh, and Kate Douglass of Virginia. Three Stanford women are also set to race including freshman Torri Huske and Regan Smith, and senior Brooke Forde.

The other three women who we’ll see at the big meet in Atlanta are Olympic silver medalist in the 1500 freestyle Erica Sullivan (Texas), Rhyan White of Alabama, and Phoebe Bacon of Wisconsin.

On the men’s side, we have yet to get a look at the psych sheets, but Drew Kibler and his Texas men seem to be the team to beat yet again this year. Kibler recently helped his team to victory at Big 12’s when he won the 200 freestyle and placed third in both the 50 and 100.

Olympic medalists Bobby Finke and Kieran Smith are going to be racing for Florida at NCAAs, although Finke had to sit out of SECs due to illness. A pair of Michigan men in Jake Mitchell and Patrick Calan will also be in attendance, along with Ohio State’s Hunter Armstrong, Indiana’s Michael Brinegar, and LSU’s Brooks Curry.

As previously mentioned, the only Olympian who will race collegiately this week is Bryce Mefford who will compete for Cal at Pac-12s, which runs from Wednesday, March 2 – Saturday, March 5.

Worth noting, three of the aforementioned NCAA athletes are on the psych sheets for the Pro Swim Series this week in Jake Mitchell and Patrick Callan of Michigan, along with Emma Weyant of Virginia.

Aside from the 37 swimmers we’ve accounted for, the 13 remaining Tokyo Olympians are spread out in various positions. Gunnar Bentz and Townley Haas are the only two who have officially retired from the sport. Neither Allison Schmitt nor Simone Manuel has raced since Tokyo and neither has revealed their plans for what’s up next in their respective careers.

Another three who won’t be at the Pro Swim and haven’t indicated where they’ll be racing in the coming months are Catie DeLoof, Tom Shields, and Andrew Seliskar. DeLoof and Shields raced for the Tokyo Frog Kings and LA Current, respectively, during ISL 2021, while Andrew Seliskar opted out of the season after two seasons with the LA Current.

Both Chase Kalisz and Jay Litherland, Georgia pros, recently raced in Mexico at the Copa Heller Cup (along with the likes of Michael Andrew, Katinka Hosszu, and Sydney Pickrem).

Blake Pieroni recently announced that he’ll be out for the season due to upcoming knee surgery. Andrew Wilson is currently attending grad school at Oxford in the United Kingdom and raced for the school at the British Universities and Colleges Sport Short Course Championships in Fall 2021. Rounding out the 50-strong list of Olympians, Katie Grimes and Bella Sims appear to be training away in Nevada with their Sandpipers.

Make sure to check back in tomorrow as we get into coverage of the Pro Swim Series and men’s Pac-12s and stay tuned for the rest of the month for both women’s and men’s NCAA Championships.

Great idea for an article

Seliskar is probably the mystery guy. Schmitt on the womens side but I would assume she retired.

Y’all should get Schmitt on the podcast. Would love to see if she’s still going.

I’m surprised more athletes haven’t retired. I feel like in previous years there were more retirements immediately after the Olympics. Maybe it’s because Paris is only 3 years away instead of 4?

28
0
Reply
brooks curry for the win
Reply to  DMSWIM

also cos this was our youngest swim team in a while

Ben, did you directly contact the swimmers to see if they were still training or retired? Thanks

No. Townley and Gunnar have publically announced their retirements.

I am just curious as to who is retired and who is just taking the USA swimming stipends and their sponsors money even if they aren’t training?

you wanna call them out? Swimming is hard enough let them get a few bucks on the way out if they can do it. Those stipends need to be inflation adjusted and probably doubled as it is.