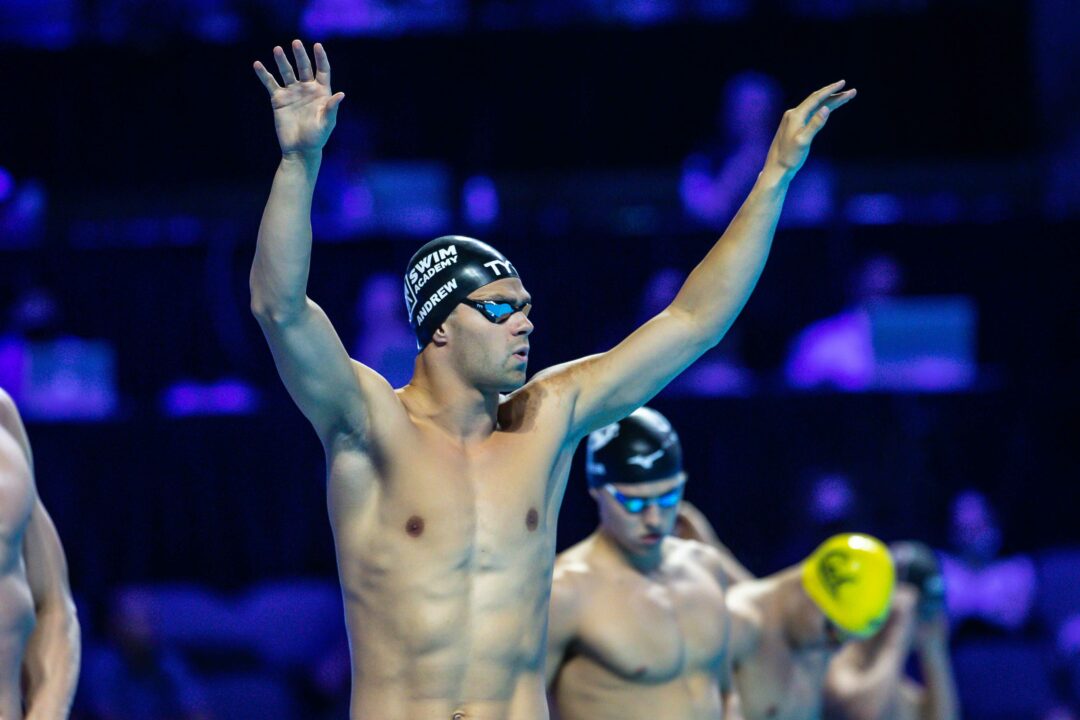 The Copa Heller Cup continued in Mexico, with swimmers such as Michael Andrew and Arno Kamminga not only battling each other but also the attitude. Archive photo via Jack Spitser/Spitser Photography

The 2022 Copa Heller Cup continued in Mexico, with swimmers not only battling each other but also the altitude. The host city of Querétaro is situated nearly 6,000 feet above sea level, about 1,000 feet lower than altitude training hub Flagstaff, Arizona.

As such, the performances here are reflective of the environment, with Olympian Chase Kalisz taking the men’s 200m IM in a time of 2:00.02. He led his Georgia teammate by over 3 seconds, with Jay Litherland registering 2;03.70 for runner-up.

Placing second behind Pickrem in the 2IM was Hungary’s Katinka Hosszu, the multi-Olympic champion who scored the 400m IM victory on night one.

American Michael Andrew pulled a difficult treble, racing the 50m breast, 100m fly and 100m free all in one session under these conditions.

The 2022 Copa Heller Cup continued in Mexico, with swimmers not only battling each other but also the attitude. The host city of Querétaro is situated nearly 6,000 feet above sea level, about 1,000 feet lower than altitude training hub Flagstaff, Arizona

What does 6000 feet have to do with the attitude of the meet?

Until he can figure out a freestyle that doesn’t fall apart every time he breathes, his 200 IM will go nowhere.

It took him at least to the Olympics. No american has swam faster than him besides Phelps and Lochte so maybe he has already gone somewhere

Right, and he was SO great at the Olympics, remember? He added 2 seconds to his 200 IM in the final and had one of the most pathetic-looking last 50s I’ve ever seen. That’s what’s going to continue to happen unless he makes some REAL changes.

I was thinking the same thing!!!!

He’s the 5th fastest performer ever are you out of your mind?

I agree but don’t want to see Sheilds beat out 😭

That picture shows he has the shortest wingspan for a tall person since Kevin Willis.

Idk why you are getting downvotes but I pointed this out on another thread. Dude just doesn’t have a good wingspan, and there is no shame in that.

More like 2 a week in summer league with relays included

Pleasantly surprised with MA’s 100 free being 51 at altitude. His PB is 50 point right? Compare that the the 100 fly at this meet being a 53 when his best time is 50 point in that event. Is Andrew gearing up to be a 48 in the 100? I know I am making broad assumptions based on a single day of racing. Just not often he swims the 100 free LCM. Would be curious to hear him comment on the subject right now.

He could have gears prosthetically implanted and he still wouldn’t go 48.

Lol this is the kinda take that can age real poorly.

But I’d probably take a bet on him going 48 at like, +500. ( Assuming you’re putting the odds WAY less likely than that, legit sounds like you’re at “John Mellencamp winning an Oscar” levels rn.)

I dunno man. I think there’s a non-zero chance of it.

But if he does, I get your house.

I want in on that bet!

Down voted for literally just posting a time, oh my SS, we are feisty.

He took the fly easy to save for the free.

I’m not sure how much altitude impacts a 100. USA Swimming doesn’t give any conversion factor in a 100 at any altitude.

NISCA gives about 0.2s for that length of race for All-America purposes iirc, but imo swimming LCM 100s at 6000 feet is more like half a second slower… otoh I’m not a 52s LCM swimmer.

I don’t think it has much impact for one 100, but if your not acclimated, I think it has a definite impact on recovering between multiple races. I think they also give a really small adjustment for above 6000 feet don’t they?

He is going from training at sea level to 6000 feet so it impacts him not only in racing but in recovery between races.