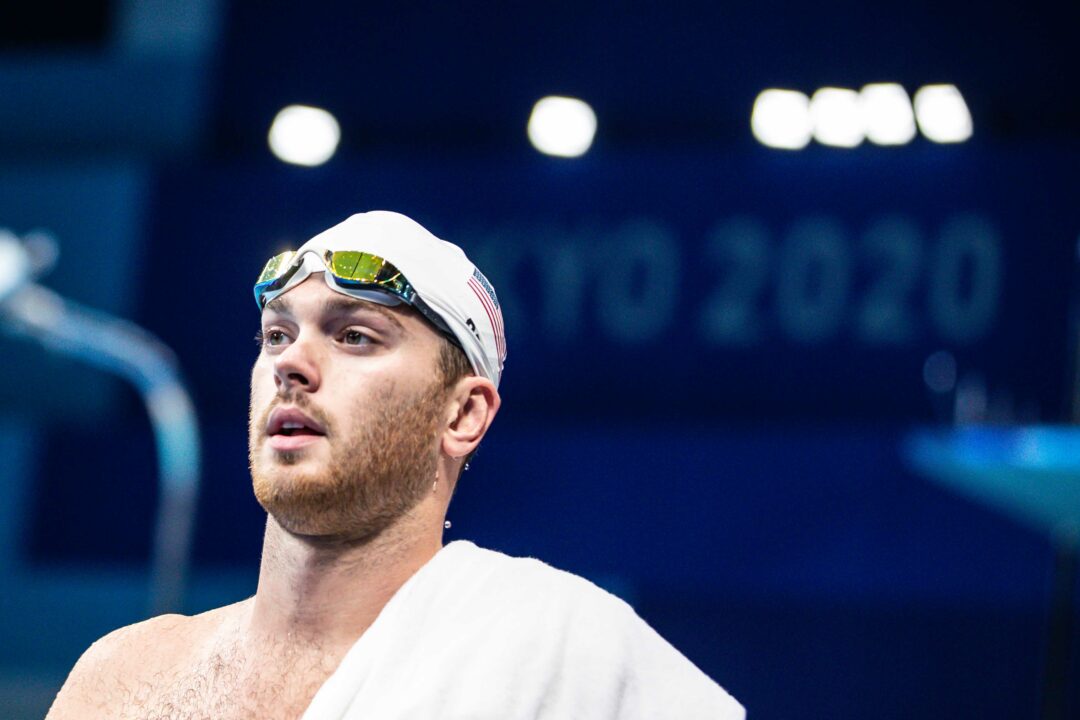 2016 Olympic gold medalist Gunnar Bentz announced Tuesday that the men's 200 butterfly final at the Tokyo Olympics would be the final race of his career. Current photo via Jack Spitser/Spitser Photography

2016 Olympic gold medalist Gunnar Bentz announced on Instagram Tuesday that the final of the men’s 200 butterfly at the Tokyo Olympics would be the final race of his swimming career.

Bentz grew up in Atlanta and attended Saint Pius X Catholic High School. Bentz swam for Dynamo Swim Club in Atlanta and later the University of Georgia under Coach Jack Bauerle. Bentz was a major contributor to Georgia’s team from 2014 through 2018, earning 20 total All-American honors during his NCAA career.

Bentz swam in 11 individual NCAA championship finals during his college career, and though he never won an NCAA title he placed as high as 3rd in the 400 IM in 2015 and 3rd 200 butterfly in 2017.

At U.S. Olympic Trials in 2016, Bentz placed 5th in the 200 freestyle, qualifying for the Olympic team as a member of the 4 x 200 freestyle relay. In Rio, Bentz swam on the prelims relay, helping the Americans advance to the final. Bentz was awarded an Olympic gold medal following the Americans’ victory in Rio, though he became far more famous for what ensued outside of the pool in Brazil.

During the post-meet celebrations, Bentz, along with teammates Ryan Lochte, Jack Conger, and Jimmy Feigen was involved in the “Lochtegate” gas station incident. Following the Rio incident, Bentz, Conger, and Feigen were suspended from competition by USA Swimming for 4 months (and Lochte for 10). Bentz managed to bounce back in 2017, and though he did not make the 2017 World Championship team, he placed 3rd behind Georgia teammates Chase Kalisz and Jay Litherland in the 400 IM at the 2017 U.S. National Championships in Indianapolis.

In fact, Bentz did not make another international team until the 2021 U.S. Olympic Trials in Omaha where he qualified 2nd in the 200 fly. Despite placing 2nd in Omaha, Bentz leaves Tokyo as the highest-placing American man in the 200 butterfly with a 7th-place effort in the final. U.S. Trials champion Zach Harting did not advance beyond the semifinals in Tokyo.

Though a long-time Georgia Bulldog, Bentz spent his final months training for the 2021 U.S. Olympic Trials at the University of Texas under the tutelage of Eddie Reese.

My goodness. What is wrong with you people?

Congratulations on a brilliant career. Best of luck in your next chapter.

Forever known as one of Rio scandal perpetrators

I honestly forgot he was involved. I remember him by his age group breaststroke speed, incredible versatility throughout his career, and his gold medal.

15-16 200 breast NAG record holder who went on to win an Olympic gold in a freestyle event. And in between podiumed at NCAAs in fly and IM.
It’s only because of these athlete’s incredible achievements that their drunken antics are known by millions. Remember that.

The Rio thing was a scandal because Lochte lied about it on NBC. Dunno if that makes the rest of ’em “perpetrators.”

Pretty sick career if I do say so myself, consistently scored in every A final at NCAAs for 4 years straight #dynamoGrit