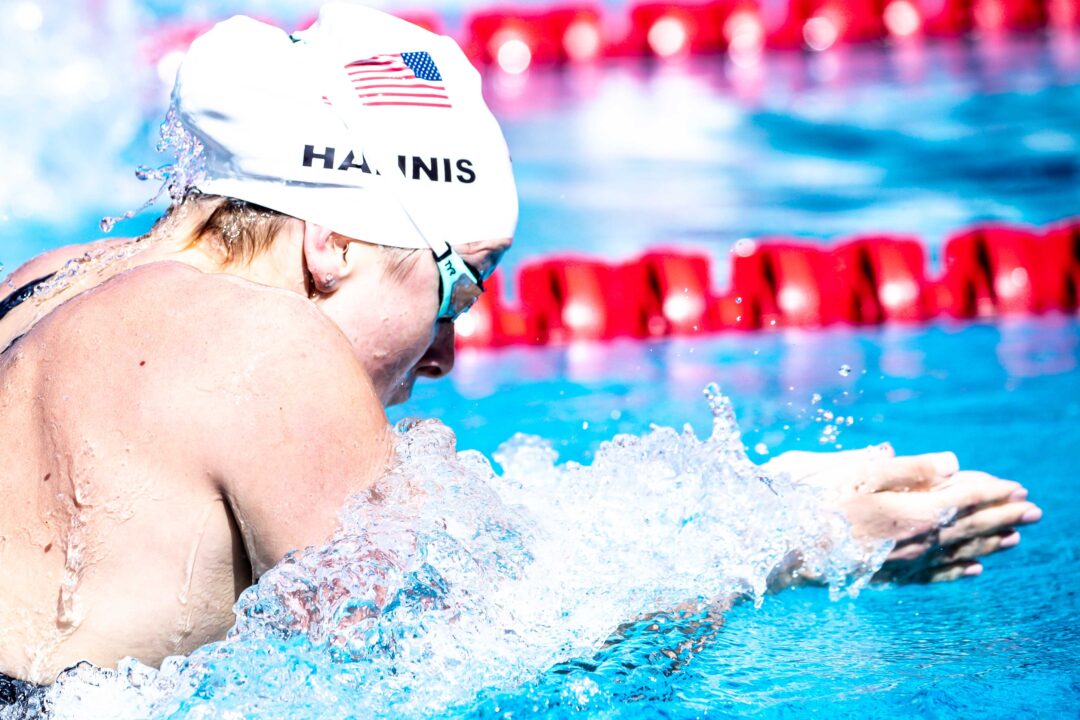 Hannis, a 2016 U.S. Olympian in the 200 breast, finished 6th in last night’s 100 breast semifinal. But she was disqualified out of the race – at the time, we were told the DQ came for underwater dolphin kicks. In breaststroke, each swimmer is allowed just one downward dolphin kick on the underwater pullout off of each start or wall.

Hannis did not appear on the original start lists for the final. But sometime between last night and this afternoon, Hannis’s DQ was officially overturned, her 1:07.15 returned to 6th-place in the semifinals, and her name added to the start list for tonight’s final.

Kaitlyn Dobler was the swimmer who moved to 8th place with Hannis’s DQ. Rather than bumping Dobler out of the final, officials chose to add Hannis into the final and keep Dobler – leaving the Olympic Trials final with an unorthodox 9 swimmers.

The decision to hold a 9-person final is at the referee’s discretion. We actually saw this same situation in the Wave I Olympic Trials meet last week, with an overturned DQ leading to a 9-swimmer A final in the women’s 200 IM. (Oddly enough, in that case, the DQ’d swimmer was placed in “lane 0” on the side of the pool, with the original 8 swimmers named to the final keeping their original lanes. This time around, Hannis was placed into lane 7 where a 6th-place finisher would be placed. It’s Dobler who was bumped out to lane 0).

The swimmer originally DQ’d in Wave I, Tennessee’s Trude Rothrock, wound up finishing fourth and just 1.1 seconds away from transferring on to the Wave II Trials meet.

In another situation at Wave I, in the men’s 200 breaststroke, Ethan Dang and Jacob Schababerle originally tied for 8th and were set to swim-off for a spot in the A final. An earlier DQ in the event was overturned, however, bumping them to the B final, where Schababerle swam the 3rd-fastest time overall.

This presents some inconsistency in the decision-making that hasn’t been given formal explanation, but seems to revolve around timing – whether the meet sheet for the final has been printed or not when the DQ is overturned.

This time around, though, it’s not just a transfer to another Wave on the line – it’s a qualification for the Olympic Games. Hannis has only been 1:07.7 and 1:07.1 in her two swims so far (well behind the trio of 1:05s currently expected to battle it out for two Olympic spots). But Hannis has a career-best of 1:05.78 from the summer of 2018 and has proven she can excel in the Olympic Trials spotlight. In 2016, Hannis came through with one of the most buzzworthy swims of Olympic Trials, skipping the underwater pullout entirely on the last wall of her 200 breast and surging from 4th to 2nd on the final 50 to make the Olympic team.

It’s not clear whether Hannis’s overturned DQ is related to that upward snap of the feet during the stroke, or to the underwater pullout portion as originally indicated. We’re working to get an explanation from meet officials and will update this story when we learn more.

SwimSwam needs to push hard for the video! This charade with Hannis has gone on long enough. If it was legal, share the video! There are numerous under water videos of her swimming in competition where she clearly has a quick downward fly kick between each legal kick. If this was a legal swim, prove it with the video! That should be a simple and easy thing for USA Swimming to provide… There is no reason for all those officials to be on deck if USA Swimming is just going to overturn ever disqualification.

Way too many DQS being overturned. Poor Stroke and turn judge or judges. Last Olympic trials one judge DQed 9 women for Lochte rule before being removed.

Don’t blame the official, blame the swimmer for cheating and blame USA Swimming leaders for overruling the disqualifications.

You live in a world

If it’s the correct call, it’s the right thing to do. Bravo to the officials for doing what is in the best interest of the athletes.

not surprised by this. If the original decision had stood, then Hannis’ breaststroke career would likely be over — since it would be difficult for her to change her kick.

Anyone know the official who made the call?

But who will swim in Lane 9?

My brain simply can’t handle the asymmetry in a Championship Final. The meet needs to be restarted.