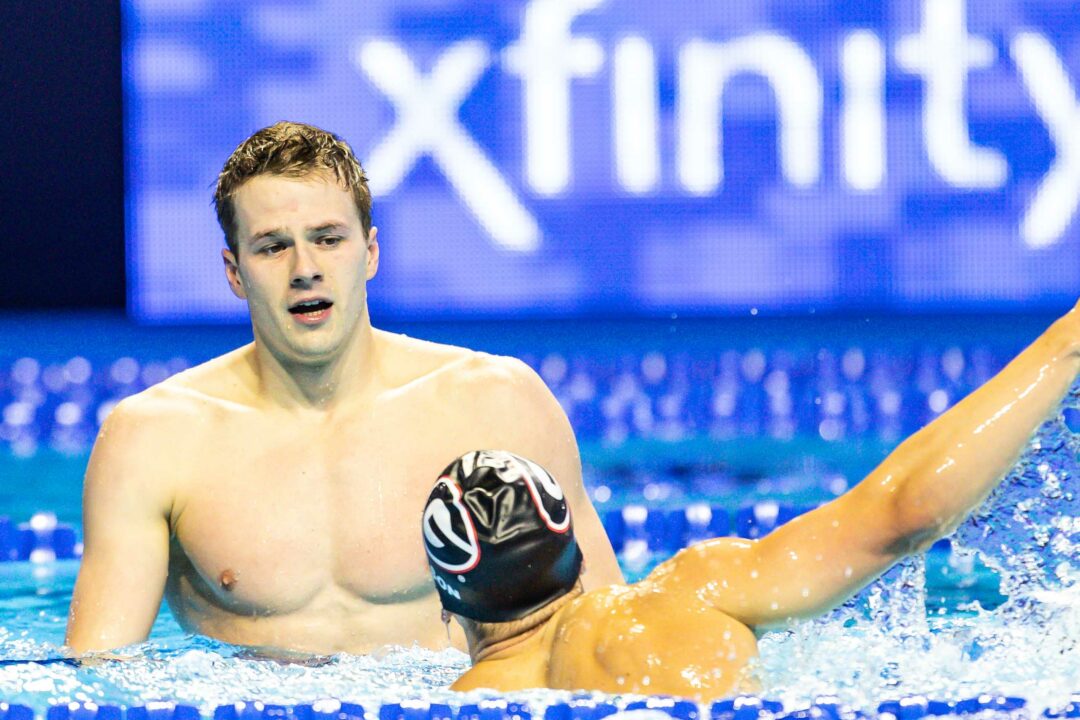 Nic Fink compared this meet to the 2016 Trials, that this time around he was prepared for any possible outcome, whereas in 2016 he could only see him making the team. Fink credited that more relaxed mental approach with helping him get that victory tonight.

Yeah, one of the biggest reasons that I kind of spun my wheels in 2016 and had a pretty poor meet was because I envisioned myself winning, and there was no other — not winning but making the team, there was no other options, and if there were, then I wouldn’t even consider it. I wouldn’t put any stock into it…So I think it was a lot more fun this time around, a lot less stressful knowing that — knowing that I was going to be happy either way. If my hard work made it so that I could make the team, great, if not, then it was an awesome experience to be here…

Fink missed out on an Olympic berth just two nights ago when he finished 3rd by just 0.06s. Tonight he said about that experience:

Yeah, quite frankly I would rather slip on the blocks than get out touched like that, and I won’t necessarily show you but I didn’t cut my fingernails between then and now.

With the women’s 1500 and men’s 800 freestyles being added to the Olympic program, Finke was asked if he’s had to adjust his training at all to prepare for the 800.

I’ve kind of always done the 800 throughout the years. My training didn’t really change.  The 1500 I consider my best event, so I’m looking forward to that on Saturday and potentially Sunday, but nothing changed through training or anything.

It was a four-man race early, and it looked like a head-to-head duel late, but the final of the men’s 800 free turned into yet another three-way battle coming down to the finish—though a little more separation than we’ve seen in other events.

21-year-old Bobby Finke, the American Record holder in the 1650-yard freestyle, stayed at the front of the race the entire way and really made his move over the final 200, winning by almost two seconds in a time of 7:48.22.

Finke, representing Saint Petersburg, narrowly misses his best time (7:47.58) as he qualifies for his first Olympic team, and also moves up into seventh in this season’s world rankings.

Ross Dant of NC State stuck with Finke early on, and with 150 to go, appeared to be well on his way to a top-two finish. But it Michael Brinegar, a U.S. National Open Water team member and Indiana University distance swimmer, who made a huge move over the last 50, closing in a scintillating 27.35 to run down Dant and snag second in 7:49.94. Dant was third in 7:50.66.

Brinegar lowers his previous best of 7:54.56, set in 2019, and likely punches his ticket to the Olympics next month, following in the footsteps of his mother who was an Olympian in the 1970s. Dant re-lowers his PB that he set in the heats (7:54.98).

Jordan Wilimovsky, who has already qualified for the Olympic team in the 10k open water event, was fourth in 7:53.07, setting him up for what she be a strong 1500 on the weekend

Any potential drama in the men’s 200 breaststroke was put to a stop by the finishing flourish of Nic Fink, as the University of Georgia alum turned a tight four-way battle with 50 meters to go into a dominant victory in a time of 2:07.55.

This is also the first Olympic berth for the 27-year-old, who was a close third in the 100 breast on Monday night.

With Fink taking off on the last length, the battle for second came down to Andrew Wilson and Will Licon, reminiscent of the fight Licon was in five years ago at the Trials with Kevin Cordes.

Wilson held the slight advantage at the turn, and managed to nail the finish better than Licon, touching in 2:08.32 to add a second event to his program in Tokyo after also finishing as the runner-up in the 100. Wilson’s PB stands at 2:07.77, set in August 2019.

It’s a second consecutive painfully-close third-place finish for Licon at the Olympic Trials, as the former Texas Longhorn finished in 2:08.50. The 26-year-old has now missed the Olympic team in this event by a combined 32 one-hundredths of a second at the last two Trials.

Matt Fallon, the top seed after going 2:08.91 in the semis, was way back at the start as expected, but never made up ground on the field and was a distant eighth in 2:12.25.

I wasn’t really a fan of nic until I heard his interviews/press conference, well spoken dude and hoping he can snag a medal in tokyo

x2. I’d never seen him interviewed, just seen his name in the results for years. The guy is really well spoken… let’s keep getting him up there for the media, great personality for swimming and for his sponsors!