Alex Walsh and Kate Douglass: The Most Dominant Duo In NCAA History? 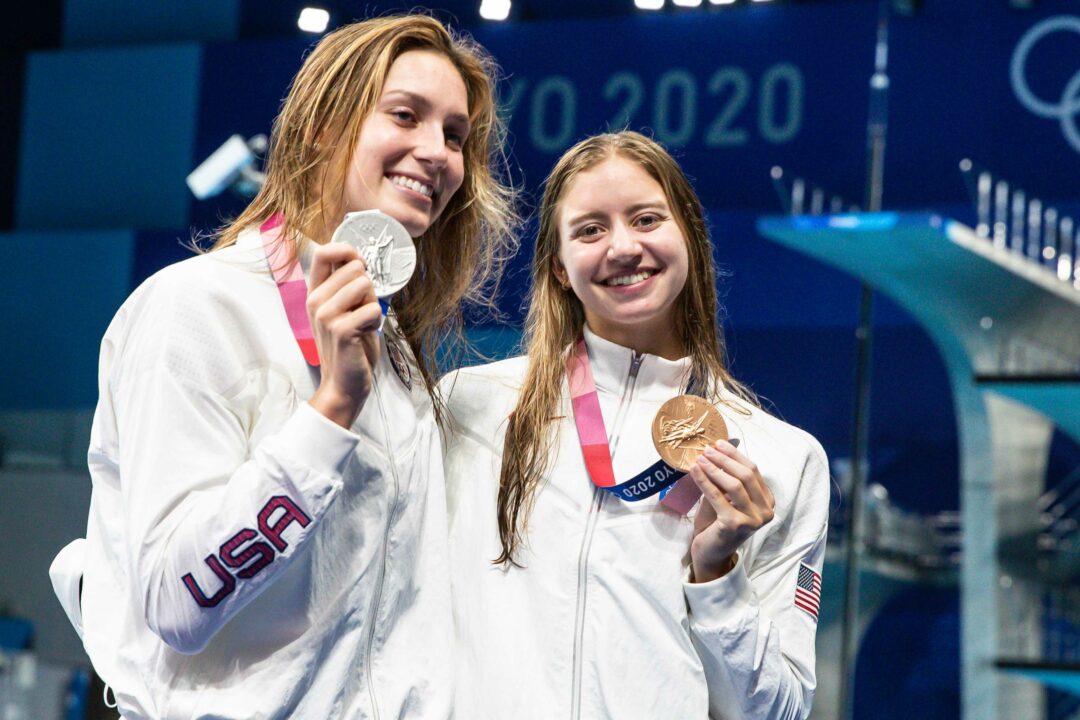 Douglass and Walsh both went three-for-three in individual events at NCAAs this year, a feat that has only happened three times in history between teammates. Archive photo via Jack Spitser/Spitser Photography

Both of them went three-for-three individually, marking the first time in 22 years that multiple Division I swimmers from the same team, male or female, won all three of their individual races at the NCAA Championships and combined for a full individual 120 points.

In fact, this feat has only occurred four times dating back to 1963, when the last individual event on the current program, the 1650 freestyle, was added. The other three instances were in 1988 with Florida’s Julia Gorman and Tami Bruce (Florida’s Dara Torres also won three individual events in 1988, but tied in the 50 free and therefore was only awarded 58.5 points in total), in 1990 with Stanford’s Janet Evans and Janel Jorgenson, and 2000 with Georgia’s Courtney Shealy and Kristy Kowal.

Instances Where Multiple Swimmers From The Same Team Swept Their Individual Events at NCAAs:

Due to the fact that Walsh and Douglass completed such a rare feat, we begin to wonder: does their performance make them the greatest single-team duo to exist in the history of the NCAA?

None of the aforementioned duos are even close to the eight American records that Walsh and Douglass share from this year.

In addition, the sheer versatility that Walsh and Douglass combine to have is something that is almost never seen in swimming. If the two of them swam their best time in every single individual event contested at NCAAs, at least one of them would place top 8 in every event with the exception of the 500 and 1650 free. In three events, both of them would be in the top 8.

And this doesn’t include relay splits, which would help their cause even more. For example, although Walsh’s best flat start 100 free time is a 48.59, she has consistently been 46-point on UVA’s 400 free relays, which would most definitely contend for top three at NCAAs. Similarly, don’t let her best time of 51.31 in the 100 fly distract you from the fact that she split 49.45 on the 400 medley relay at NCAAs, which is also a guaranteed top-four finish.

Kate Douglass’s Best Times and Their Hypothetical Placement At 2022 NCAAs:

Alex Walsh’s Best Times and Their Hypothetical Placement At 2022 NCAAs:

From a scoring perspective, if Walsh and Douglass swam every event at NCAAs (excluding relays) with their personal best times, they would combine for a total of 246 points, with Douglass scoring 104 and Walsh scoring 142. That score would place them sixth in the team competition, behind NC’s State’s 279 points and ahead of Louisville’s 196.5 points. That’s crazy to think about, considering that they would score that much even without the advantage of relay points.

Some may argue that many great teammates often overlap in terms of their best events, rendering it impossible for all of them to sweep their individual events. In addition, since swimming has progressed so much over generations, it might not be fair to compare swimmers from one era to another era.

So for us to better gauge how good Walsh and Douglass are compared to swimmers in recent history, we decided to compare them to different combinations of Katie Ledecky, Simone Manuel, and Ella Eastin, who led the Stanford women’s dynasty in 2017 and 2018 and happen to be the best comparison for the success of Walsh and Douglass. To make things more even, we included Walsh and Douglass’s performances from the 2021 season to add on to what they did this season.

*The total number of events in which an individual swimmer has broken an American Record. For example, even though Ella Eastin broke Katie Ledecky’s 400 IM American Record, the 400 IM still counts as two individual American records because both swimmers have broken it.

**The total number of different relays that the two swimmers have been on that have won an NCAA title/Broke an American Record. For example, even though Alex Walsh wasn’t on UVA’s 200 medley relay at NCAAs this year, it still counts as one relay title between her and Kate Douglass. However, the relays that both Walsh and Douglass were on only count as one relay as well.

Ledecky/Manuel, Ledecky/Eastin, and Eastin/Manuel were never able to go three-for-three at 2017 or 2018 NCAAs at the same time (mainly due to the fact that Manuel and Ledecky faced each other in the 200 free in 2017 and Ledecky and Eastin faced each other in the 400 IM in 2018), but from the chart, you can tell that all three combinations of the trio have more individual and total records and titles than Walsh and Douglass. Then again, you could argue the versatility point. Ledecky and Manuel are primarily freestylers, and none of the Stanford duos have the range that Walsh and Douglass have. But in terms of dominance, Stanford has the edge, considering that Ledecky is the greatest distance freestyler of all time, Eastin has her untouchable 3:54 400 IM American Record and nobody has been near Manuel’s mark of 45.56 in the 100 free.

Aside from the duos mentioned above, there are also many duos in history that deserved to be recognized despite not sweeping all of their individual events at NCAAs. Some of them include Indiana’s Mark Spitz and Gary Hall in the early 1970s, Michigan’s Gustavo Borges and Tom Dolan in 1995, and Stanford’s Janet Evans and Summer Sanders in 1990 and 1991.

In other words, although calling Walsh and Douglass the greatest NCAA duo all time might be up to debate, there is no denying that their two-person performance at this year’s NCAAs is one for the history books.

Walsh and Douglass are also the only duo to both go 3-for-3 at the same meet while also being reigning Olympic medalists. Kowal and Shealy both medaled at the 2000 Olympics in Sydney but that was 6 months after they both went 3-for-3 at NCs.

I should have clarified. I meant reigning **individual** Olympic medalist. Janel Jorgensen won a relay medal in ‘88 but not an individual medal. Jorgensen/Evans were obviously an impressive duo though! Especially since they were competing against the doped East Germans.

True. But then your comment with Shealy isn’t good either. 😉. She only won medals in relays too.

Of course not. But no guarantee the other way either.

Historic performance by the duo.. Simply unbelievable. Perhaps it would’ve been nice to also mention the coaching staff in a quick sentence

Add in the fact that either of them could’ve also won a couple other events, including at least 1 of the others’ events

It’s probably already been discussed and I missed it, but prior to Douglass, who was the last person to go 7 for 7 winning every event they swam at an NCAAs?

Before we get too worked up about it, remember that Phelps went 8 for 8 at one Olympics.

That wasn’t the question. Michael Phelps didn’t even compete in NCAAs.

your name should be butt hurt longhorn

Congratulations, this is the dumbest comment of the day