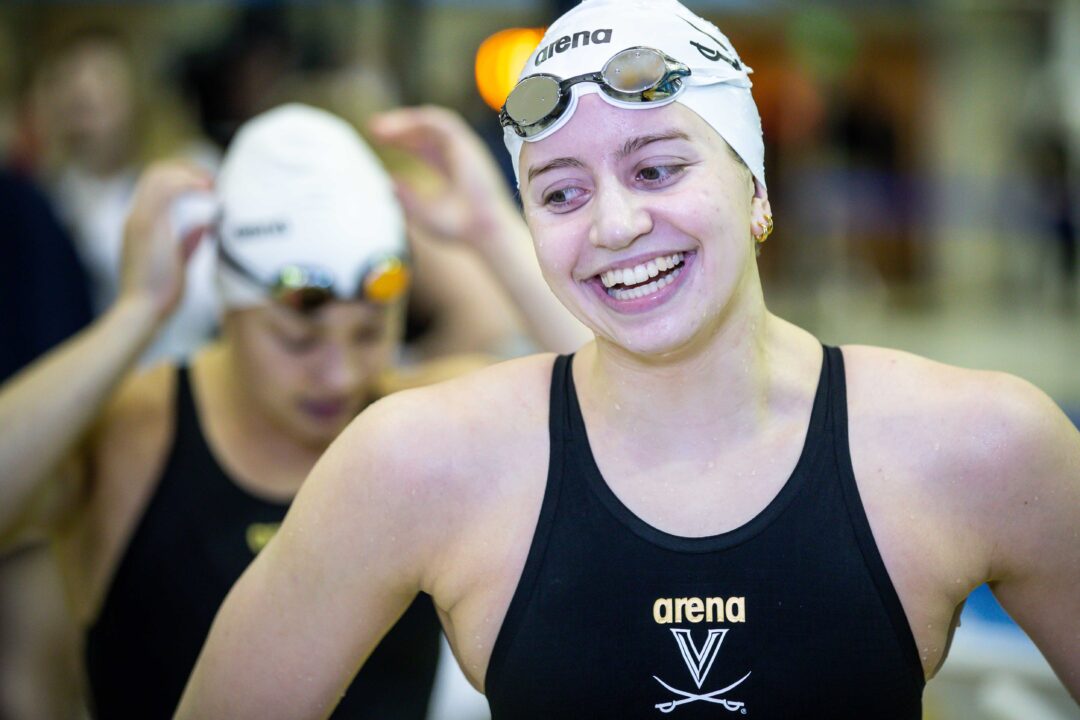 Awards were announced for the men's and women's swimmer, coach, diver, and diving coach of the year for the 2021-22 season by the CSCAA. Archive photo via Jack Spitser/Spitser Photography

The College Swimming and Diving Coaches Association of America (CSCAA) has announced award winners for the NCAA Division I Women’s and Men’s Championships and the 2021-22 season.

Award winners are decided by votes from NCAA Division I head coaches, and one ballot came from a fan vote decided via Instagram polling.

On the women’s side, Virgina’s Kate Douglass won the award for Swimmer of the Year. Douglass won three events, the 50 free, 100 fly, and 200 breast, and managed to break the American record in all three races. In addition, she was also on Virginia’s title-winning 200 free relay, 200 medley relay, 400 free relay, and 400 medley relay, with the latter two relays breaking American records. In the fan poll, Douglass received 56% out of the 1,686 fan votes, while NC State’s Katharine Berkoff, who won the 100 back and became the first woman under 49 seconds in the event, took the second most votes with 26%. Douglass’s teammate Alex Walsh, who won the 200 fly, 200 IM, and 400 IM and broke the American record in the 200 IM, took the third most votes with 18%

Virginia head coach Todd DeSorbo won Coach of the Year for leading his team to their second-straight NCAA title, marking the second year in a row and the second time overall that he has taken home this award.

Arizona State’s Leon Marchand won the award for men’s Swimmer of the Year. Marchand won the 200 IM and 200 breast and placed second in the 400 IM, breaking the NCAA and US Open record in the 200 IM. In addtion, he swam the second-fastest time ever in the 200 breast and the fourth-fastest time in the 400 IM. In the fan vote, it was LSU’s Brooks Curry who received the most votes, taking 55% of the 1,517 fan votes. Curry was the NCAA champion in the 50 and 100 free, and was the only swimmer besides Marchand to win two individual titles at Men’s NCAAs. Marchand took 35% of the votes, and Cal’s Hugo Gonzalez, who won and broke the NCAA and US Open record in the 400 IM, took 10%.

Cal head coach Dave Durden won Coach of the Year due to Cal’s NCAA championship this year. This is the sixth time that Durden has won this award.

Texas A&M’s Curtis Mathew won the Diver of the Year award for his wins in the one-meter and three-meter diving events. Mathew was also the public’s  favorite, taking 58% out of the 1,415 fan votes. Indiana’s Andrew Capobianco, who was runner-up to Mathew in both the one-meter and three-meter events, had 29% of the vote. Miami’s Zach Cooper, who was second in the platform diving event, took 13% of the vote. Matew’s coach, Jay Lerew, won the Diving Coach of the Year award. He previous won the award for women’s Diving Coach of the Year in 2012.

Kate Cadwallader Douglass has been magnificent

I don’t really understand the fan vote for the men. Leon Marchand easily should have received the most votes. He was the fastest performer ever in the 200 IM, second fastest ever in 200 Breast, 4th fastest ever in 400 IM, and 5th fastest ever for his 800 Free Relay split. I have tremendous respect for Brooks Curry. He has an innate ability to get his hand on the wall first in the 50 Free and 100 Free, but he doesn’t even leave the meet as the fastest swimmer in either of those events. This should have been a nearly unanimous vote for Leon.

The fan vote is really all about who gets the most encouragement to vote. I saw lots of LSU swimmers reposting things on Instagram from the LSU Swimming and Diving account to go vote for Brooks, etc. I’m pretty sure it was just a bigger “friendly” turn out. If you randomly surveyed a group of swim fans, the vote would obviously swing more in Marchand’s favor.

Bob Bowman training one of the best IMers and all-around swimmers in the world right now, sounds familiar huh?

Marchand is Bowman’s “next one”.

I still don’t get it. How was it possible to win in three swimming disciplines that have nothing in common. I can’t even blame it on the weak fields because it was done with American records. And it isn’t like 50 years ago in 1970x era when competition was in embryonic stage of development and records got beaten almost each month. And it was done by the swimmer who had been showing nothing extraordinary in long pool. Just a good swimmer there, far away from world standards.
Is it that American SCY women’s competition is still pretty much under development? Or this kind of competition (SCY) is really unpredictable and specialization in particular stroke isn’t really required to be… Read more »

“nothing extraordinary in long pool”

You know Kate is an individual Olympic Bronze Medalist right?

Yes, she is. But being multiple American record holder in SCY she isn’t even close to world standards in LCM.
There was none of my intentions to lesser Douglass’ achievements at this NCAA. And I’m sure you perfectly understood that. My point was about absolutely different thing. But I appreciate you extraordinary observing abilities of noticing imperfection of my limited English vocabulary when expressing my thoughts. 😀

I still can’t really tell if your unimpressed with Kate specifically or SCY in general. She’s just starting out on the international stage, so I guess stay tuned. She doesn’t have much experience in LC since her breakout in college so I think it’s a bit soon to label her LC swimming as “underwhelming”. She sure put together an awesome race on the biggest stage this summer…

kate douglass is just yozhik’s newest target. he has previously undermined the achievements of missy franklin, katinka hosszu, li bingjie, ariarne titmus among others. all because, in yozhik’s mind, they threaten katie ledecky’s greatness. earlier this month, we were sure that summer mcintosh would be next, but i guess swimming scy is a bigger crime than posting a 4:29 in a “weak” event

Ooooh that guy! Between him and Swimfan it’s just really hard to watch Kate Douglass succeed…

Is this the new handle for Smith-King-Huske-Manuel?

Not to mention his other events ( IM and backstroke).

Your comment is kinda hard to follow but based on how many medals the US women have won in the last decade I’d hardly call it “still under development”. Clearly you don’t follow US women’s swimming that closely; if you’d paid any attention to the summer Kate Douglass had you wouldn’t say she’s showed “nothing extraordinary”.

Sjostrom swims more than one specialty lc as well…. with world records in fr and fly…………. don’t be anti women

I’m a little bit surprised that Berkoff had the second most fan votes and not Walsh, but I do think her 100 back was the most impressive swim of the meet so I’m not all that surprised

I’m sure the Virginia fan base vote was a little split. I agree that Berkoff had the swim of the meet.

16
0
Reply
not a formality
Reply to  BearlyBreathing

Any poster here will tell you there’s a lot I don’t remember.
Thanks for the answer!

2
0
Reply
not a formality
Reply to  BearlyBreathing