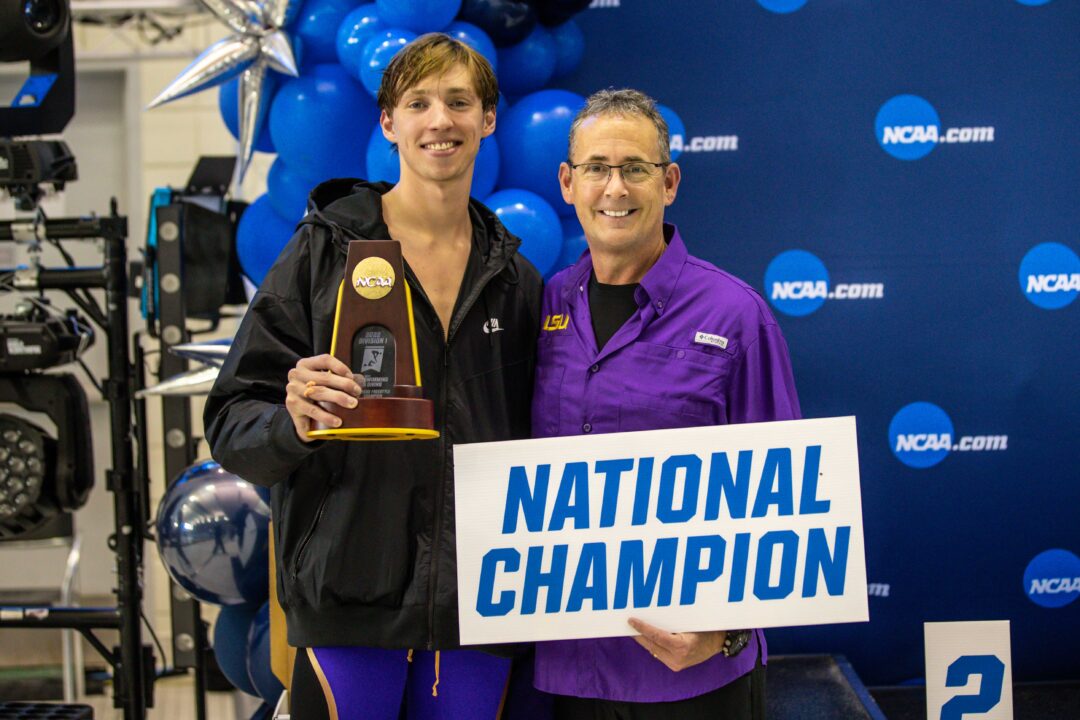 The California Golden Bears won the program’s 7th team title at this year’s NCAA Division I Men’s Swimming & Diving Championships. 5 of the 7 titles amassed were under David Durden in the last 11 years. With a run of success that includes winning 2 of the last 3 NCAA titles, the Bears are ranked 7th amongst the college programs with the most NCAA-declared Division I men’s team titles in history. Moreover, Cal is only 1 NCAA victory away from tying Auburn and Stanford for the 5th spot in the rankings.

The Texas Longhorns battled for the top spot but finished in 2nd. The previous year’s winners put forth strong performances led by Tokyo 2020 Olympian Drew Kibler. He contributed to Texas’ victories in the 400 and 800 free relays and claimed a title for himself in the 200-yard freestyle.

Three schools–Cal, Texas, and Florida–ended the meet with 3 event titles each. Though Cal and Texas saw no positive change in their rankings, Florida ascended 2 spots.

LSU had a historic NCAA Championships with Brooks Curry’s accomplishments in the pool. Curry displayed his sprinting proficiency by earning individual titles in the 50 and 100-yard freestyles. As a result of his efforts, LSU jumped up 10 spots in the all-time rankings. They are now one of 41 programs of all time that have won at least 4 NCAA individual events at the Division I level. The previous titles were earned by Todd Torres in 1987 in the 100 breast and Mark Andrews in 1988 in the 50 free.

Leon Marchand made a remarkable debut for Arizona State after he took down Caeleb Dressel’s U.S. Open and NCAA records in the 200-yard individual medley. Marchand then followed up with the second-fastest performance ever in the 200-yard breaststroke. His momentum carried the Sun Devils to a 6th-place finish that marked their first time cracking into the top 10 in 19 years. Consequently, ASU moved up 2 ranks and has the same amount of event titles as Harvard and Washington, which cut its program in 2009.

Although Marchand seemed indomitable, Cal’s Hugo Gonzalez defeated him in the 400-yard individual medley and swam to a distant first that set new U.S. Open and NCAA records.

Texas A&M made another significant climb thanks to Kurtis Mathews’ wins in the 1-meter and 3-meter dives. These titles now bring the program’s total to 5, which were accumulated in an astonishing two consecutive years. Shaine Casas established Texas A&M in the all-time rankings with his impressive triple last year winning the 100 back, 200 back, and 200 IM. In only two years, Texas A&M swiftly reached 35th place of all time.

Similar to last year’s trend, there are minimal changes to the all-time rankings list.

Below are the 2022 NCAA Men’s D1 Swimming & Diving event champions as well as the updated all-time rankings.

Bring back Men’s Swimming and Diving at The University of IOWA!

I’d be interested to see this for the women and the other NCAA divisions.

I wonder where the Bruins stood in the rankings when they closed up the program 28 years ago. Definitely in the Top 10 and perhaps right up there with Cal just outside of the Top 5. For that matter, they are the only NCAA Swimming and Diving Team Champion, men’s or women’s, to have dropped their program. Such a shame.