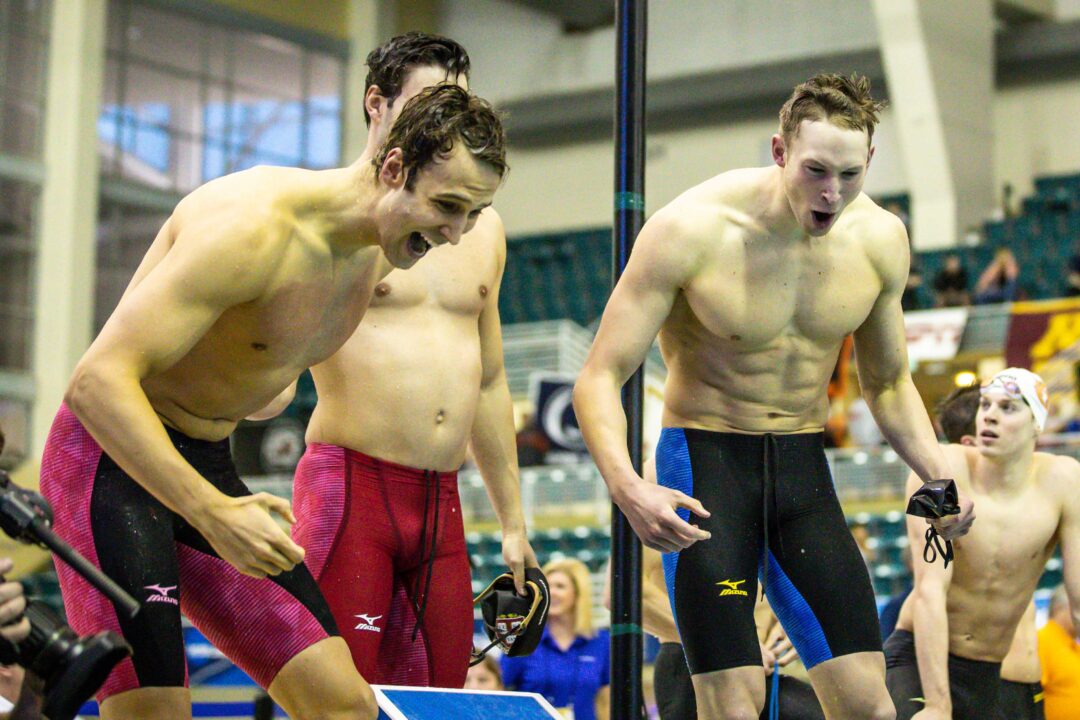 Men’s NCAAs was a meet to remember, featuring some of the fastest fields in history, four new U.S. Open Records and some intriguing team battles to boot.

After the women’s championships last week, we analyzed how SwimSwam’s final power rankings stacked up against the actual results of the championships.

Now we’ll do the same for the men’s meet, and the results show there were a few teams that greatly exceeded our expectations and some that fell well below where we thought they’d be.

WHAT WE GOT RIGHT

We swept the top five, with the Cal pick over Texas seeming somewhat controversial at the time but it ended up being a runaway win for the Bears after the Longhorns faltered in diving.

The Indiana call at fifth over the likes of ASU held up, with the Hoosiers getting some big diving performances to boost them up into the top five.

Georgia, Virginia Tech and Alabama ended up falling in the correct spots, though the movement around them show that were plenty of surprises in the team race relative to our expectations.

After the women’s team impressed by jumping up to sixth, we certainly didn’t see the Louisville men falling down to 12th. Our final predictions had the Cardinal slotted in at sixth, up two spots from their position in the psych sheet scoring (no diving), but we gave them a boost both due to the performance of the women’s team and their historical ability to step up when it counts.

It ultimately didn’t happen, as the Cards scored 67 fewer points than they were projected to, with the likes of Georgia and UVA outscoring projections in the pool and Stanford and OSU both coming closer to their psych sheet seeds than UL and getting diving points.

OTHER SURPRISES IN TOP 25

The biggest movers up the rankings relative to our picks was Harvard and Minnesota, who both jumped up four spots.

Stanford only moved up two spots, but performed better than we thought overall—there was a sentiment that they wouldn’t be able to have a good double-taper after a big Pac-12 showing, and they swam well.

Harvard outscored their seeded points by 77 to jump into 13th, while Minnesota essentially held serve relative to projections but ended up finishing in a tie for 19th after we had them slotted 23rd.

For Harvard, it was a fitting end to Dean Farris‘ swimming career, as he scored 21 points individually while leading the Crimson to points in all five relays, including a trio of ninth-place finishes. Overall, Harvard scored 70 relay points, so Farris had a hand in 91 of their 103 points.

Michigan dropped in a big way, down nine spots to 23rd, while 25th-place Mizzou finished seven spots lower than we predicted.

MOVING UP AND MOVING OUT

Purdue, Arizona, Texas A&M and Columbia all moved into the top 25 after we had predicted them to be on the outside looking in.

We knew Purdue was good on the boards, but maybe not quite 81 points good. They jumped up into a tie for 15th despite just four points in the pool, while Arizona outscored seed by 20 points and added 18 in diving to place 17th.

The Aggies also got 42 points in diving to tie for 19th, while Columbia had all 30 of their points come on the boards to slide into 24th.

Those teams took out the four schools we predicted in the top 25 that missed: Wisconsin, USC, FSU and Northwestern.

Wisconsin’s success, both individually and on relays, hinged on Jake Newmark, who was dealing with a non-COVID-related illness and dropped a few events and was not at his best when he did race.

Florida State also dropped significantly as we projected them to be relay scorers and it didn’t happen.

USC and Northwestern were both slightly off their projections and fell out of the top 25.

Texas A&M will be one school to watch next year, they have a scary good recruiting class coming in

Technically speaking, the biggest jump or biggest miss is Purdue, going from not being ranked (i.e. 26 or above) to being T-15. That makes it…. What? +11 best case scenario? Something like that

Was “SwimSwam Official” in the pickems all of the picks from your preview articles?

Wise move James in not throwing the boss under the bus and pointing out that Braden, Robert, and Andrew all picked Texas to win out. If that Mount Rushmore of swim reporters can’t call that significant Bear victory then how are we mere mortals ever supposed to get our pick’ems right?

To be clear: James would be throwing himself under the bus, because before publishing the Power Rankings, I said “James I’m changing my pick to Cal,” and he neglected to update it before publishing, so I had to live with what he put up.

I have a girlfriend, but she goes to another school 😉 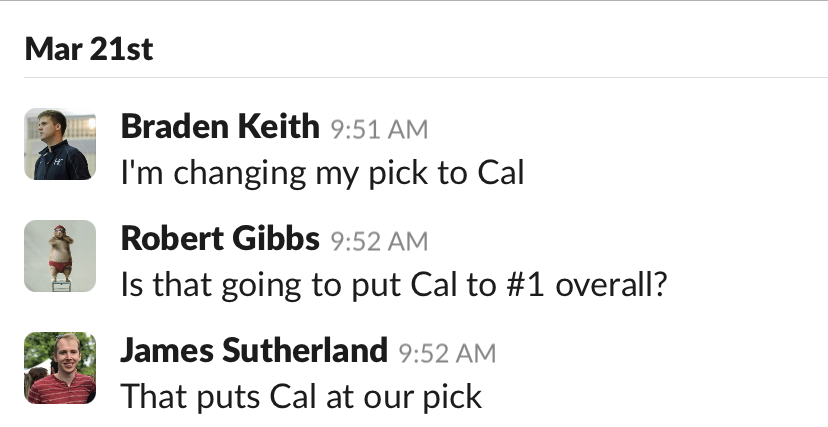 Not photoshopped. Braden indeed changed his pick for Cal and I didn’t change the chart with everyone’s individual picks (though one could argue he should’ve done that) 🤔 lol

I wonder if we SwimSwam readers would have ever heard about this had Texas won…:p

I would say pretty accurate….especially if you aren’t considering diving! Well done!