How Did We Do? Reviewing SwimSwam’s Final Women’s NCAA Power Rankings 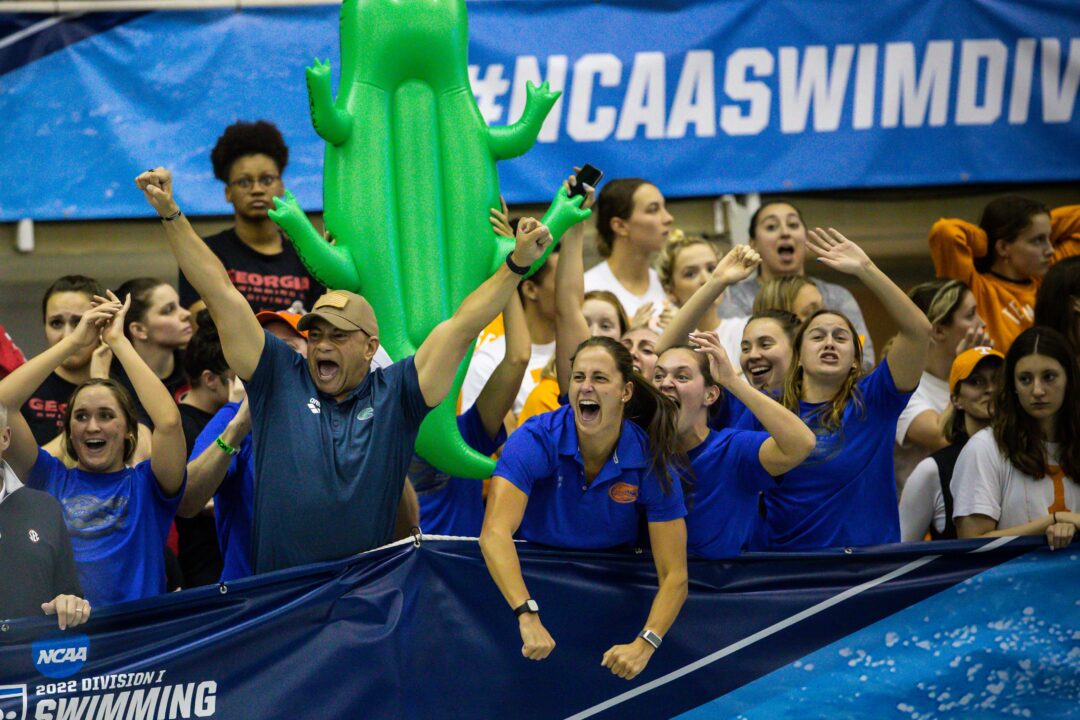 The University of Florida women were the surprise of the meet, placing 13th at NCAAs after our Power Rankings had them slotted at 24th. Current photo via Jack Spitser/Spitser Photography

The Women’s NCAA Championships had a little bit of everything.

With the meet wrapping up on Saturday night, we can now go back and review our final edition of the Power Rankings and see what we got right, what we got wrong, and what we got really wrong.

WHAT WE GOT RIGHT

We nailed three teams in the top 10 right on the money, led by no-brainer Virginia in the first position.

We also correctly had Michigan in seventh and Ohio State at ninth, though the teams surrounding them moved around quite a bit.

Overall, 10 of our picks were within one place of where they ended up, and 14 were within two.

As the meet wore on it became evidently clear that after the conversation coming in was a possible UVA/Stanford battle for first—though the majority conceded the Cavs would be too powerful this year—the real talk should’ve been about Texas giving the Cardinal a run for second.

We had Stanford slotted for the second position and Texas for third, but the Longhorns had a really strong performance overall and grabbed the runner-up spot in the penultimate event, platform diving, before holding off the Cardinal in the 400 free relay.

It wasn’t that Stanford performed poorly, but Texas swam (and dove) exceptionally. The Longhorns outswam their seeds in the pool by 83.5 points and added 90 diving points, while Stanford scored 32 more swimming points than projected.

The other main takeaways from the top 10 were the breakout showing from Louisville and the drops from Cal and Tennessee.

Our final picks had the Cardinals slotted in for 10th, but the team ended up in sixth after prevailing in a tight battle with Michigan, Cal and OSU. Lousiville outscored their seeded points by 62, while the Wolverines, Bears and Buckeyes all dropped.

While Cal essentially held serve compared to their seed, there was a prevailing sentiment in our picks that they had more to offer than they had shown this season, and that didn’t turn out to be the case.

Tennessee couldn’t recreate their SEC form, dropping from our pick of eighth down to 10th while scoring 161.5 points fewer than seeded.

Outside of the top 10, the biggest surprise performer compared to our projections was Florida, as the Gators were slotted in for 24th and pulled off 13th. Florida was only projected to score 16 swimming points and ended up with 98, outpacing their seed by 82 points while adding 17 on the boards.

MOVING UP AND MOVING OUT

Arizona, Miami (FL) and Duke all proved us wrong by finishing inside the top-25 after we had them on the outside looking in.

On the other side of things, three teams we had in the top-25 didn’t crack that threshold:

ASU’s Emma Nordin couldn’t find her mid-season form and the Sun Devils fell to 26th after we picked them to finish 21st.

We really missed on Texas A&M and FSU, who combined to score just one point over the entire meet. Chloe Stepanek was off for the Aggies (their lone point scorer with a 16th pace finish in the 200 free, where she was seeded to finish third), and the Seminole relays underperformed.

It is wild to me that Texas got 2nd

Carol Capitani is clearly doing something right there. Especially impressive given their lack of pure sprinters for the relays

SwimSwam did an AMAZING job covering these meets! For some reason, my comments are “Awaiting Approval”. I hope that I can continue to comment to show my gratitude for swimswam!

A number of my comments never show up. Never understood why. They were by no means controversial or insulting.