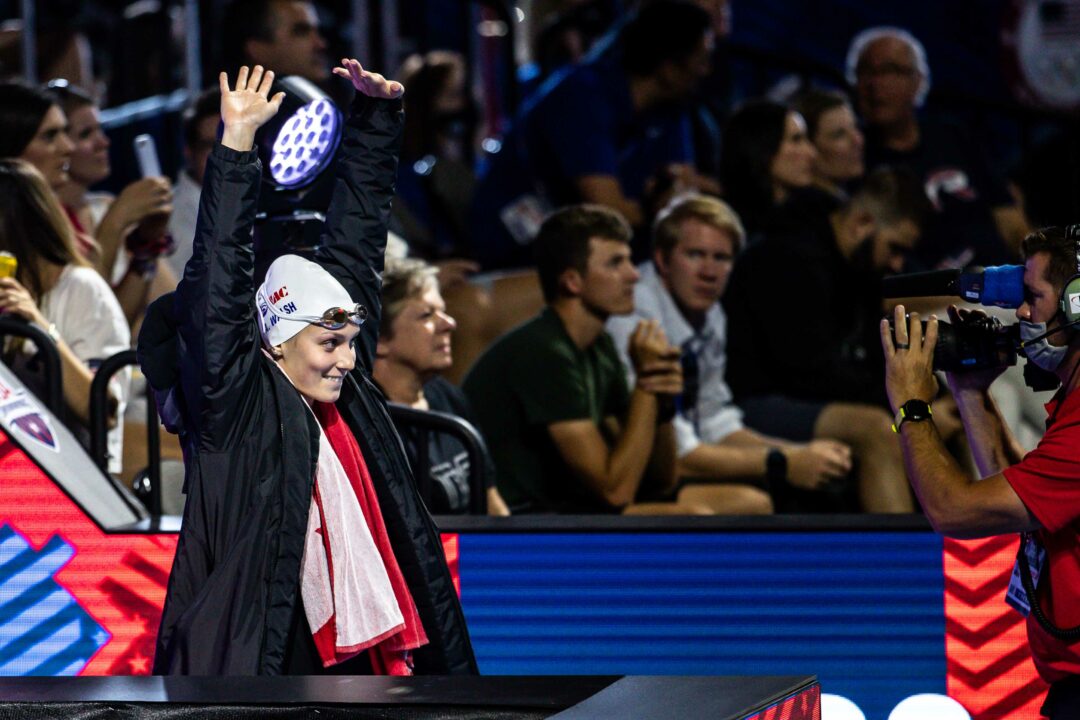 After the truncated 2020-21 NCAA season that didn’t see any meets get going until January, the 2021-22 campaign is already in full swing with the majority of teams having raced multiple times, showing us a glimpse of what they’ve got this year.

While we’re in the final stages of our 2021-2022 College Swimming Previews, taking a deep dive into the top 12 teams from last season’s NCAA Championships, the first edition of our power rankings are a more up-to-date look at how we rank the top 20 programs nationally in the “preseason”—primarily based on roster outlook for the season, but a little weight based on how teams have swum thus far.

Without further ado, here are our women’s NCAA power rankings, along with the team’s standing in our final 2020-2021 power ranks:

Note: This article has been edited since it was first published, since our initial rankings were based on a writer accidentally leaving Alabama completely off his ballot. That adjustment has moved Alabama from #14 to #8, and we’ve adjusted the rankings accordingly.

After only scoring 12 points at NCAAs last season, Notre Dame lands in the top 25 thanks in part to the 14th-ranked recruiting class. Coleen Gillilan started off strong against Pitt and Cleveland State, and freshman Madelyn Christman looks like she’s the real deal. -JS

Positive start to the season with a decisive win over FSU. Ellie Waldrep leading a strong start for the first-years. The Auburn women had a lot of NCAA qualifiers last year, just none who came away with points. Ryan Wochomurka had a ton of success with women at Houston, so he should be able to get a few over that hump this year. -JS

Emma Nordin will finally get a shot at a national title two years after finishing with the top time in the division in the 500 free. -AM

56 returning diving points puts Purdue in this spot. -AM

Maybe humbled a bit after their dual with Texas. Chloe Stepanek needs help at the top. -JS

Already three meets under their belt. Sarah Thompson is on fire. -JS

Their top NCAA scorers last season, Madeline Smith and Hannah Brunzell, had a good opening showing against Indiana. Ashley Strouse could push them to the next level. -JS

The Trojans had a very good weekend racing lesser competition at home. Laticia-Leigh Transom hitting 48.4/1:43.9 freestyles this early is something to keep an eye on. Kaitlyn Dobler looks good and Marlene Kahler appears to have adjusted to yards well. -JS

The youth movement continues as reigning 200 back national champ Bacon is joined by a pair of elite freshmen in Paige McKenna and Mackenzie McConagha. -JS

An elite diver, solid relay potential, a few potential individual scorers. I have UNC ranked at about their ceiling, but this team looks like the archetype of a team that finishes in the 11-20 range. -AM

Noelle Peplowski and Mac Looze have been good early. Mariah Denigan getting some wins against Northwestern should be a nice confidence booster. -JS

The Gators cruised to an early-season win over FAU and haven’t shown much of their hand yet. A low-key solid recruiting class should pay dividends down the road, especially with Russian freestyler Ekaterina Nikonova expected to join the team for the second semester. –JS

After breaking out to win the school’s first-ever SEC title last season, Kentucky has no major losses to report and holds close to their NCAA placing for now. –JS

Another squad that has yet to dive into action, Ohio State is getting 33 individual NCAA points from fifth-year returnees Kristen Romano and Katie Trace, which gives the team a fighting chance to improve on their seventh-place showing from March. -JS

A big jump for a team that was 13th at NCAAs. The Cards gave Michigan a good run at the SMU Classic, and getting Arina Openysheva back in the fold is big. -JS

The Dawgs don’t get underway until Friday, so it makes sense they slot very near the spot they finished at NCAAs last season. Losing Courtney Harnish is tough, but they’ve kept the majority of their top performers and Peyton Palsha comes over from Arkansas to fill the distance void. -JS

This team finished 5th last year and return every single point including all 4 members of their title-winning 400 free relay. Their problem is that Cal and Texas also lost very little with 5th-year returners and Alabama’s recruiting class was unranked. -AM

A nice mix of transfers and incoming freshmen keep the Vols near the top of the heap. Mona McSharry and first-year Sara Stotler in particular have gotten off to a good start. -JS

Michigan looked great at the SMU classic. Maggie MacNeil is obviously one of the best swimmers in the NCAA today, but behind her, freshmen Letitia Sim and Lindsay Flynn are looking like the real deal. On top of that, Michigan returns all 2021 NCAA scorers except Sierra Schmidt, although Schmidt did score 31 points last year. -SP

The early season performances from Ivey are encouraging. She’s very much their go-to swimmer come NCAAs, and seeing her already firing is a positive sign. Rajic and Stadden look solid so far, and I think the first-years will make more of an impact than some think. -JS

While Texas may not have been truly tested yet, Erica Sullivan has started off strong and the fifth-year return of Evie Pfeifer is big. Kelly Pash has come out firing. -JS

Katharine Berkoff, Sophie Hansson, Kate Moore and Kylee Alons have all started well. Some of their lesser-known swimmers came through in the Saturday dual with Tennessee. -JS

Stanford looked flat against Utah. With their talent, we have to believe they’re still the second-best team in the country, but nothing so far would lead me to believe they can beat Virginia. -BK

Not much needs to be said—if you’ve been following the first few weekends that Virginia’s been competing, they’ve been near-flawless. Gretchen Walsh in particular has really impressed. -JS

We will have a better sense after fall invite season concludes over the next 4-6 weeks.

Wondering if the addition of Texas freshman Olympian diver, Hailey Hernandez, was missed in these rankings. She’ll easily get 30-40 new points this year for Texas.

i wonder how many teams are saved by their 5th years… so many of them mentioned.

I think USC will surprise many!!

2
-2
Reply
So confused
Reply to  jeff

It absolutely was incredibly slow. They will crush UVA. I feel confident!

Writing it down ‘crush UVA’.

5
-1
Reply
PancakeLover
Reply to  So confused

Don’t worry. The more slow meets they have, the faster they’ll move to #1 in the rankings

hoosiers should be top 10

USC has gotten significantly better and drops.
Bama stays the same and drops a ton.

Authors – care to explain your reasoning?

One voter didn’t include Alabama in their top 25. Since we average together the 5 votes…that hits pretty hard. Rest of the voters had Alabama in the 6-7 range. I suspect that in the next round, they’ll rise.

USC – I’ve updated to be as a comparison to 2021 NCAAs rather than 2021 Final Power Rankings (which were done before NCAAs). So, USC has actually risen by 5 spots relative to their actual NCAA finish. Hoping that makes a little more sense. I think USC will be better than last year. But…I also think that between suiting and maybe a little bit of a disrupted schedule after the Kipp moves, they might have been more rested for a mid-October invite… Read more »

If a voter didn’t include Alabama on their top 25, they either made a mistake and forgot to include them, or they’re a moron.

I would look at it as a mistake, and I would suggest asking the voter to redo their ballot and then edit the article.

If everyone else sees Alabama as 6-7, and the mystery voter agrees, editing would leave more accurate impressions for Georgia, Louisville, Ohio State, Kentucky, Florida and Indiana, and perhaps Tennessee and Michigan.

All these teams are one spot higher than Swimswam really thinks, right?

I am the mystery writer. I wouldn’t have had them quite that high, but definitely didn’t mean to leave them off the ballot. We’ve adjusted the article.

Thanks. Now the Alabama and Tennessee fans who are on SwimSwam can get right to the argument that they have been waiting for.

That’s not necessarily an “either/or” statement. It’s quite possible that the writer both made a mistake, and, is, in fact, a moron.

Although, I definitely just made a mistake as I was re-sorting my rankings. I promise everyone, including my work supervisor, who’s a big Alabama fan (although I doubt he gives a hoot about swimming), that I did not intentionally slight Alabama. Just shaking off a bit of summer rust, just like a lot of swimmers are. 🙂

Thanks for the explanation!

Thanks. And hoping that was an oversight about Alabama…

But USC – as someone mentioned Sheridan alone is a massive addition, plus the return of Transom is massive. Remember Delgado missed NCAAs last year. And the freshmen look strong. They already have A final material for many individual events and relays.

Why don’t more people choose ASU? Bob as the coach is about the best you can go

He’s coached SO many women to glory. Oh wait…