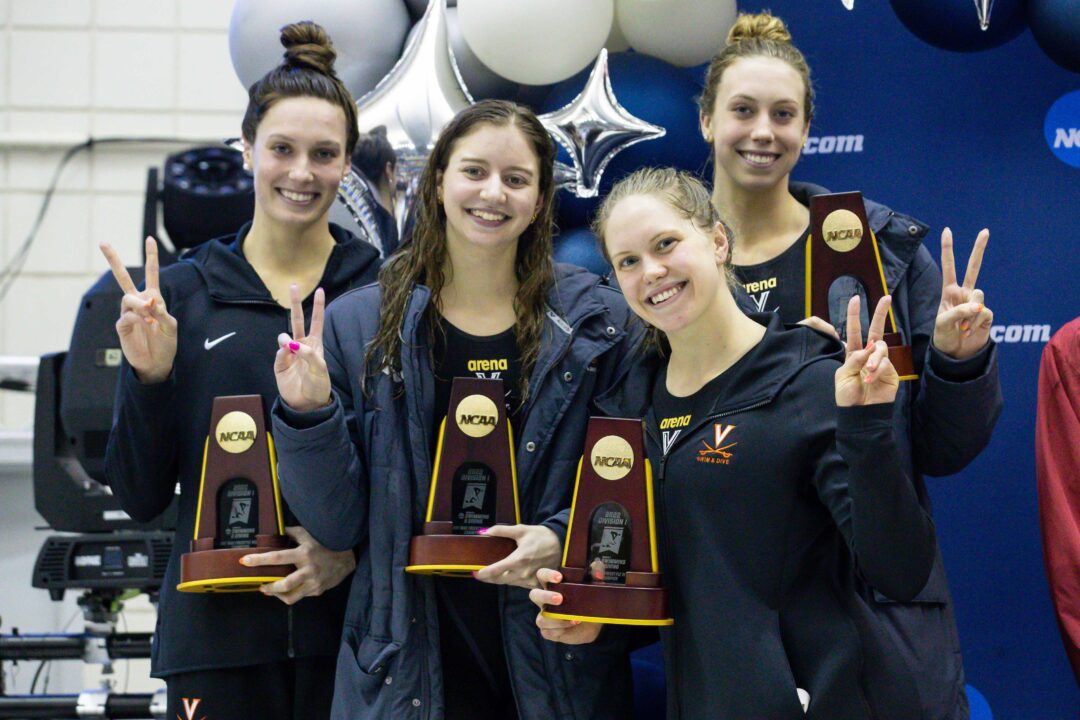 The Virginia Cavaliers proved to be unstoppable with 11 event wins at the NCAA Division I Women’s Swimming & Diving Championships in March. Last year, they doubled their NCAA event victories in one single meet, and this year, they nearly accomplished the same feat. The program now has 23 event titles all-time after only having 6 prior to the 2021 NCAA Championships.

With that jump, since the 2019 NCAA Championships, the Cavaliers have climbed from 18th to 10th place in the all-time rankings.

A particular trio of Cavalier women dominated the scene earning multiple titles in relays and individual events. Junior Kate Douglass won 7 titles, 4 of which were in relays, the 50 free, 100 fly, and 200 breaststroke. Sophomore Alex Walsh won 6 titles with 3 of those being the 200 IM, 400 IM, and 200 fly. Freshman Gretchen Walsh, Alex’s sister, claimed 5 titles that included one individual win in the 100 free.

After picking up their first relay title in the 800 free relay last year, the Cavaliers came back to take the win in the other 4 relays, which gave the program an NCAA title in all the relay events. Other first-time titles for the Cavaliers included the 400 IM, 200 fly, 100 fly, 200 breast, and 100 free. Douglass and Alex Walsh also defended their titles, which were the program’s first last year, in the 50 free and 200 IM, respectively.

The Cavaliers’ top performers will have one more year together before Douglass graduates.

5th-year Lia Thomas earned the University of Pennsylvania’s first NCAA women’s title by touching first in the 500 free. The win also gave Thomas her own first NCAA title. This makes Penn the 50th program to have an event title in NCAA Division I women’s swimming & diving history – which doesn’t include the programs that won titles in the predecessor AIAW.

Stanford extended its lead in the all-time rankings as a result of Regan Smith’s and Taylor Ruck’s performances. The two won the 800 free relay together and continued on to win an individual event each. Smith was victorious in the 200 back and Ruck was triumphant in the 200 free.

North Carolina State and Miami (FL) jumped up 2 spots in the rankings earning a single title each. NCSU’s Katharine Berkoff defended her title in the 100 back and became the first woman to dip under the 49-second barrier. Mia Vallee of Miami (FL) won the 1-meter dive and now is the 3rd competitor to contribute an NCAA event title to the program. The previous two winners were also divers–Jenny Keim and Brittany Viola. They each claimed 2 titles during their diving careers at Miami (FL).

Of the 50 teams in the all-time rankings, 4 experienced a positive change while 8 went down a spot. Overall, the changes are not drastic and the teams that declined are still close with a chance to move up.