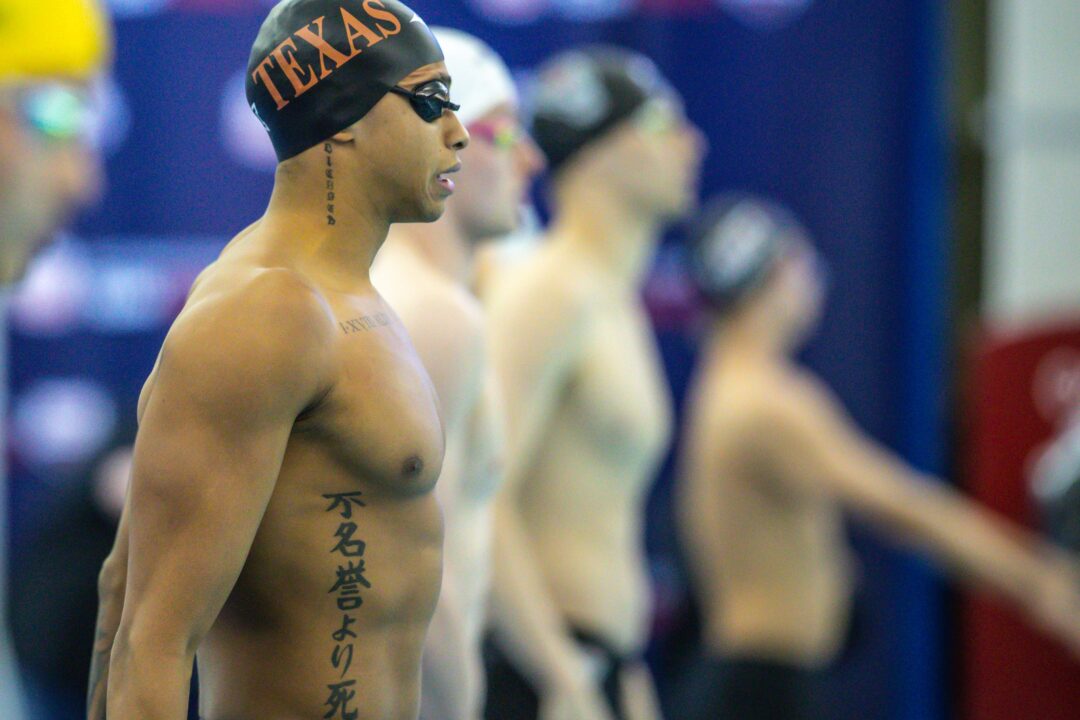 Shaine Casas, Claire Curzan, Charlie Swanson and Kylee Alons have all dropped out of an 'A' final on Day 3 of the U.S. Trials in Greensboro. Archive photo via Jack Spitser/Spitser Photography

Four swimmers have scratched out of championship heats for tonight’s finals session from the 2022 U.S. World Championship Trials, while Michael Andrew has committed to swim all three events in which he qualified on Thursday.

In the men’s 100 butterfly, Shaine Casas has scratched the ‘A’ final after qualifying sixth in the prelims, bumping his University of Texas training mate Drew Kibler up into the big heat.

Casas came into the meet ranked fourth in the world in the 100 fly, clocking 51.09 last month in San Antonio, but will instead opt for the 50 back tonight, where he’ll face a stacked field that includes Hunter Armstrong and Justin Ress, who became the #2 and #4 performers of all-time in the prelims.

Casas has reportedly scratched the 100 fly as it conflicts with the 200 back on the 2022 World Championship schedule. Casas has likely already qualified for the team in the 200 back, and the semi-finals of the 100 fly does fall a few events prior to the 200 back final in Budapest.

In the women’s 100 fly, eighth-place Kylee Alons has dropped the event, giving way for Texas’ Emma Sticklen to advance into the championship final. Like Casas, Alons will turn her focus to the 50 back final.

Another ‘A’ final withdrawal came in the women’s 50 back, where Claire Curzan drops the event after qualifying sixth this morning. With Curzan out, Berit Berglund will now swim in the championship heat.

Curzan will race the 100 fly final earlier in the session, having qualified second out of the prelims.

In the men’s 400 IM, Charlie Swanson, who has already qualified for the World Championship team in the 200 breast, has scratched the ‘A’ final after qualifying seventh out of the prelims in 4:18.62. Cal’s Jason Louser now moves into the championship heat.

One swimmer who hasn’t scratched at all is Michael Andrew, who will race in the ‘A’ final of the men’s 100 fly, 50 breast and 50 back, back-to-back-to-back.

Andrew swam the same triple at the 2018 U.S. Nationals, going on to win the 50 breast, place third in the 100 fly and fourth in the 50 back, but an important to distinction was that Andrew simply needed to qualify for the Pan Pacific Championships in any event at Nationals and he would be able to swim whatever he wanted at Pan Pacs.

I just have not seen Michael Andrew been able to pull off triple like this at national qualification meet since his age group days. I hope he proves me wrong, but I am not seeing him qualify in either 50 if he gives it his all in the 100 fly.

If casas could go 51 flat again thatd make the team or at least be close. He must not think he can go faster today or feel like his backstroke is stronger atm. Only he really kniws how hes feeling so i trust that csll

But if it were me, 2 peeps fresh under AR plus the wr holder in the hundred shead of me by hslf a sec in a 50 would be much more daunting. Some people rise to that kind of challenge tho.or maybe its jusy to tune up for his 100 back tomorrow where maybe he thinks thats his best chance at making the team in a hundred. But armstrong looking good, and murphy is murphy.… Read more »

He may not win but maybe he’s trying to prove he deserves that 2nd spot in the individual 50 at WC’s.

4
0
Reply
There's no doubt that he's tightening up

In both the 100 fly and 50 back there’s essentially one spot up for grabs, because Dressel.

Given Armstrong/Ress’ 24 flats, and Murphy being there still, would’ve backed Casas in the 100 fly much more than the 50 back. Very strange decision from the outside.

This 50 back from MA could be fun…

Surprised by Casas targeting the 50 back instead of the 100 fly given that 2 guys swam 24.0 this morning whereas Casas has been 51.1 already this season in the 100 fly. I really thought it would come down to him and Andrew for that second spot.

Andrew, I guess the 50 back is at the very end so it can’t really hurt but I highly doubt he’ll contend with those guys, especially with the short turnaround with the breaststroke. Of I were in his position I’d want to purely focus on the two events where I have the best chance.

If the idea is to qualifying more events for WC , it would seems better for MA to drop 50Br tonight as he is likely to win 100Br and gets a spot for 50Br. Even it is still hard to win 50Bk (especially if he went hard on the 100Fl), he had at least half an hour between 2 final races. Also, noting that 50 Br /50 Bk winners are only 3rd priority and needs 9 doubles before even being added to the roster, is it wise to races 3 finals tonight?

question – if there is not enough spots for non-olympic events winner to go, will USA Swimming enters second swimmer if that swimmer is already on the team… Read more »

Weird decision by Casas. 100 back going to be madness. Will Trenton Julian surprise— he has a hot hand.

Very surprising. Unless Casas knows he has a very special 50 back in him his odds are much better in the 100 fly. Also whoever comes second to Dressel will get that second 50 fly so it’s a 2 for the price of 1 in terms of events

Whoever gets second in the 100 fly gets to swim the 50 at worlds? Why wouldn’t MA get to swim the 50 given his second place finish in that event here?