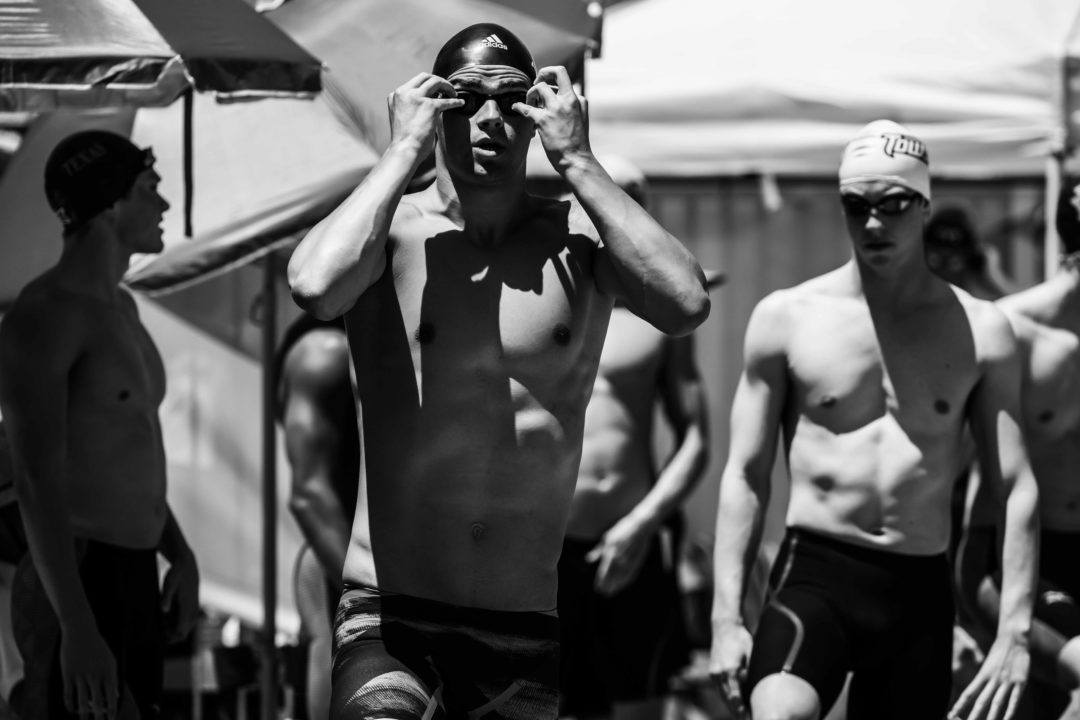 19-year-old Michael Andrew, whose goal is to become the world’s fastest sprinter in all four stroke 50s, will compete in the fly, breast and back finals on Day 3 of 2018 U.S. Nationals. Current photo via Mike Lewis/Ola Vista Photography

Day Three of the 2018 Phillips 66 National Championships will feature women’s and men’s finals in each of the following: 400 IM, 100 fly, 50 breast, and 50 back. 19-year-old Michael Andrew, whose goal is to become the world’s fastest sprinter in all four stroke 50s, will compete in the fly, breast and back.

Chase Kalisz cruised to the top spot on the leaderboard in prelims with 4:11.09, coming to the wall nearly 2.3 seconds ahead of anyone else. He looked relaxed and smooth in prelims and could crack 4:10 in the final. Regardless, he is the overwhelming favorite and should lock up his roster spot for Pan Pacs tonight. Kalisz’s Georgia teammates Jay Litherland (4:13.34) and Gunnar Bentz (4:15.33) qualified 2nd and 4th, while Sam Stewart dropped 5.8 seconds in prelims to earn the 3rd spot in the final. Also coming in with 4:15s were Sean Grieshop, Abrahm DeVine, and Charlie Swanson. 18-year-old Kieran Smith snuck into the final at 8th in 4:17.70; he is .11 shy of joining the all-time top-10 list for 17-18 boys.

Kelsi Dahlia dominated heats in the morning with the only sub-57 in the field. She posted a 56.86 in prelims, just a half-second off her best time of 56.37 from 2017 World Championships. Team Elite San Diego’s Kendyl Stewart, who represented the U.S. at 2015 Worlds in the sprint fly races, swam her second sub-58 of the season to qualify 2nd in 57.97. Together with the 57.89 she went at Los Angeles Invite earlier this month, Stewart is the fastest she’s been since 2014. Cal’s Katie McLaughlin qualified 3rd with 58.08; she, too, is swimming the fastest she has been in three years. Team Elite teammates Sarah Gibson, who swam the 50/100 fly events at Worlds last summer, and Hellen Moffit qualified 4th and 6th with 58.09 and 58.32, respectively. Dahlia’s Louisville teammate Mallory Comerford, who narrowly missed out on swimming this event at Worlds last summer, qualified 5th in 58.32.

Michael Andrew, fresh off his U.S. Open Record in the 50 fly on Thursday night, is looking for his first qualification for Pan Pacs. He qualified 3rd out of heats with 51.98. Ahead of him were Jack Saunderson of Towson, who dropped 1.18 seconds off a month-old PB to lead the qualifiers with 51.48, and Jack Conger (51.79). Conger went a lifetime best of 51.00 at PSS Atlanta in February. World Champion Caeleb Dressel is also in the hunt for a spot on the Pan Pacs roster; he qualified 4th in 52.00.

Lilly King of Indiana topped the qualifiers for the 50 breast final with 30.12. She has been sub-30 seven times, including the World Record time of 29.40 she swam at 2017 World Championships. Qualifying second was Molly Hannis with 30.21. Hannis went a PB of 29.71 at PSS Austin in January. Next was Lindsey Kozelsky of Minnesota, who dropped 1.2 seconds to qualify 3rd ahead of Breeja Larson, Jorie Caneta, Emily Weiss, Katie Meili, and Bethany Galat, all of whom swam 30-highs.

Michael Andrew tied the U.S. Open Record and set the Championship Record in prelims with 26.86. That moves him to #7 on the all-time top performances list for American swimmers; 8 of those belong to Kevin Cordes, including the American Record of 26.76. Cordes qualified 3rd in 27.06 behind Andrew and Indiana’s Ian Finnerty (26.96). Finnerty dropped .58 to drop below 27 seconds for the first time.

Defending champion Justin Ress of NC State will be in lane 4 of the men’s 50 back final tonight, with Olympic champion Matt Grevers to his right in lane 5. The pair qualified in 24.46 and 24.53, respectively. Tied for 3rd out of heats were NC State’s Ryan Held and Michael Andrew with 24.59. Olympic gold medalist Ryan Murphy was 5th with 24.63, going a best time by .01. Murphy won the 200 back national title on Thursday night and could upset the apple cart in tonight’s final.

I don’t see MA making it in the 50 back. But 50breast for worlds seems likely unless finnerty has an extra gear. 100fly is a bit of a toss up?! I feel like almost anyone in the final can make it… let’s see who has it in them to put it all on the line

Love the “Take No Prisoners” attitude from Andrew. To paraphrase the US Army Rangers, “Swim ’em all, let God sort ’em out.”

Gotta say, I’m rooting for a Michael Andrew sweep. I don’t think it’s at all likely, but damn would that be cool.

It would be one of the more epic nights in a non-trials Nationals,

this is a trials nationals though

I think he meant Olympic Trials.