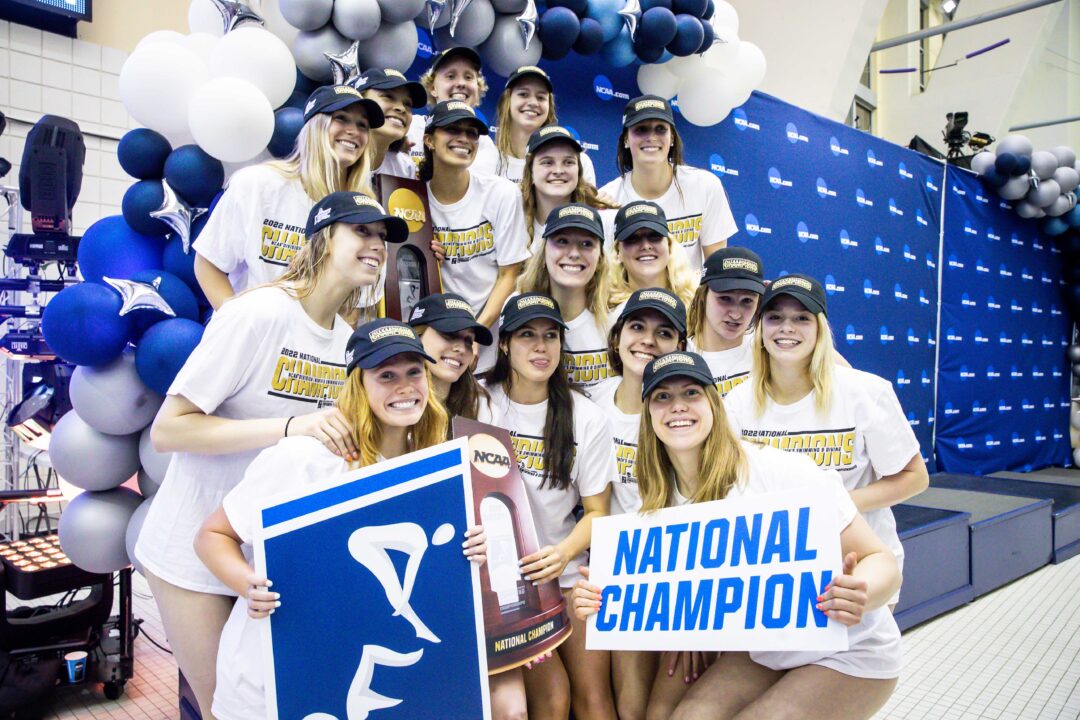 The UVA women celebrated their second straight NCAA championship, but how do each of the country's major conferences stack up? Current photo via Jack Spitser/Spitser Photography

Two weeks ago, the University of Virginia women put up a dominant performance to win their second straight NCAA championship. The Cavaliers were led by a slew of stars, including Alex Walsh, Gretchen Walsh and Kate Douglass, giving Virginia a nearly 150 point cushion over second place Texas.

UVA wasn’t the only ACC school to impress at NCAA’s, however, as the conference had half of the top six teams in the country this season. NC State, which finished runner-up to UVA last year, finished 5th this season with 279 points.

The Louisville Cardinals also had a strong meet, finishing 6th with 196.5 points. Overall, the ACC had 7 teams finish in the top 25, including the North Carolina Tar Heels, who finished 14th with 109 points, their highest finish since 2013. The ACC finished the season with more top 25 teams than any conference in the country.

The Stanford Cardinal, who came into the season with a revamped roster, led the way for the Pac 12 with a 3rd place finish with 399.5 points, just behind Texas. While the Cardinal lose fifth year senior Brooke Forde, they have another stellar recruiting class coming in, including #1 recruit Claire Curzan, as they try to close the gap on Virginia. Their Bay Area rivals, the Cal Bears, also secured a top 10 finish after finishing 8th with 180 points. Despite remaining in the top 10, this year was Cal’s worst NCAA finish since 2003, when they also finished 8th.

The Big 10 was led by rivals Michigan and Ohio State, who both finished in the top 10 with 7th and 9th place finishers, respectively. The two programs seem to be heading in different directions, however, as the Buckeyes now have two consecutive top 10 finishes after not finishing in the top 10 since 1983, while the Wolverines posted their lowest finish since 2017 and will need to find a way to replace their superstar, Olympic gold medalist Maggie MacNeil, who announced she is transferring to Cal.

The runner-up Texas Longhorns, who featured the meet’s strongest diving program, was the only Big 12 program to score, though they will be heading to the SEC soon and face much stiffer competition on the conference level.

The SEC was led by Alabama, which finished 4th in Margo Geer’s first season as the program’s head coach. Her appointment, which came after Coley Stickels left the program mid-season last year, was met with some surprise by the swimming community as she had very little full-time coaching experience before being handed the reins. Geer and her team proved all of the doubters wrong, however, swimming fast all season and leading the Crimson Tide to their highest-ever NCAA finish. The Tennessee Lady Volunteers, who won the SEC title this season, secured another top 10 finish after finishing 10th with 127 points, their fourth straight top 10 finish. Overall, the SEC had 6 programs finish in the top 25.

One of the most notable results for the SEC is the rapid decline of Texas A&M, which finished 39th with just 1 point. Under head coach Steve Bultman, the Aggies had become one of the most consistent women’s programs in the country, recording 6 straight top 4 finishes between 2013 and 2018, including back-to-back third place finishes in 2017 and 2018. They also had 12 consecutive years as a top 10 program from 2007 to 2018. Now, just four years later, the Aggies are on the verge of not scoring at all.

Penn led the way for the Ivy League, with Lia Thomas scoring 44.5 points, their highest finish ever. Yale finished 29th with 14.5 points, while Harvard finished tied for 37th with two points.

Wyoming, FIU and San Diego State were the only three mid-major programs to score points at these championships. Wyoming’s 34th place finish was the highest in program history, while Florida international scored for the fourth time in team history. San Diego State has now scored at 4 of the last 5 NCAA championships.

Wild to see A&M drop so low so quickly.

Any word on what’s going on at A&M? They were no flash-in-the-pan team. They were the model of consistency. Is this just a weird aberration or a bigger trend?

It’s pretty simple: the recruiting hasn’t been there. A&M has always done more-with-less when it comes to getting top recruits, but it’s been at an even lower level than usual lately.

It’s worth noting that the Lady Ags still finished 6th at SECs, not stellar but still in the top half. I think it proves Braden’s point that Steve is still good at getting walk-on levels to score at a conference meet, but he hasn’t recruited the talent needed for NCAAs.

A&M recruiting took a huge hit when it was rumored that Steve Bultman was going to retire in 2020. For the record, I’m glad Steve is still on the deck. We need more coaches like him,

There has been an obvious shift in the balance of power regarding women’s swimming. Just a few short years ago the ACC was hammered by the Big Ten in the challenge meet held at Purdue. That meet was supposed to be an anuual event; but it was so one sided I believe the conferences decided against it. If that meet was held today the result would be a victory for the ACC. The SEC and the PAC12 are down. The Big 12 has always been just Texas. The ACC has out recruited all the other conferences and is now the best women’s swimming conference in the country.

Now layer Texas into the SEC and see what happens.

the wording makes it sound like NC State ‘impressed’.
They returned all but 7 points of their 2021 scoring, yet scored 75 points less and dropped from 2nd to 5th….

Historically, which conference typically scores the most? Is it the SEC?