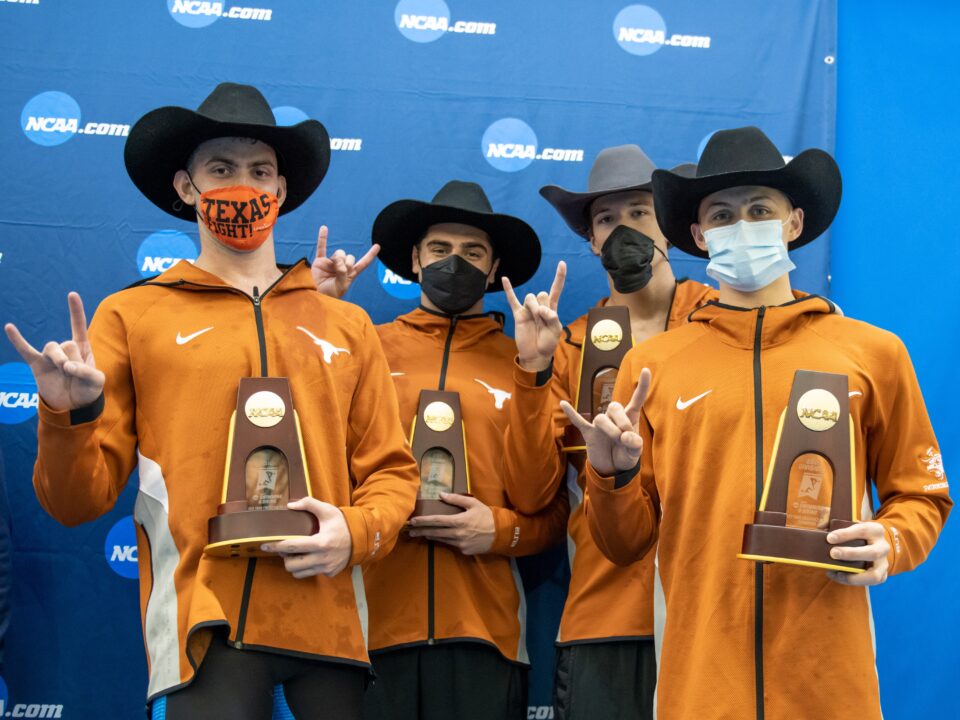 Moving into the conference championships, the Texas men continue to lead our NCAA Power Rankings, with Cal trailing closely behind. Archive photo via NCAA Photos

As in previous years, SwimSwam’s Power Rankings are somewhere between the CSCAA-style dual meet rankings and a pure prediction of NCAA finish order. SwimSwam’s rankings take into account how a team looks at the moment, while keeping the end of the season in mind through things like a team’s previous trajectory and NCAA scoring potential.  These rankings are by nature subjective, and a jumping-off point for discussion.  If you disagree with any team’s ranking, feel free to make your case in our comments section.

Much like the women’s rankings, the top end of our pre-conference men’s NCAA power ranks remains the same as it has all season, with Texas, Cal and Florida leading the way.

Indiana was the biggest mover inside the top 10, jumping from eighth in December to fifth here, while Virginia Tech leapfrogged into 12th after previously ranking 17th. We’ll see where we land in a few weeks when the conference championship meets have wrapped up.

Max McHugh seems ready to roll for the Gophers, but where else will points come from? -MH

Houlie, Dillard and Epitropov form one of the country’s best breaststroke groups and Kayky Mota should challenge to score in the flys. Divers Bryden Hattie and Matthew Wade should also provide a significant point haul from the boards. -MH

Currently, Florida State has 56 points in the Swimulator. All 56 are from relays. That’s their identity. -MH

Brooks Curry has shown no sign of an Olympic hangover and senior diver Juan Hernandez is one of the best springboard divers in the nation. The two should combine for a top 20 finish for the Tigers. -MH

At nationals this is a 2 man show, but Brooks Curry and Juan Hernandez is a pretty good show. -AM

After a shocking upset loss to South Carolina, the Missouri men don’t seem to be carrying a ton of momentum into championship season, but maybe they’re saving their best for SECs and NCAAs. -MH

If Farris is in 2019 form, the Crimson may contend for a top 10 finish. Umit Gures is primed for an A final in the 100 fly and the relays are for real. -MH

Derek Maas has taken a big step forward this year and has the potential to make 2 breast finals for the Tide. -AM

Andrei Minakov is as good as it gets in the NCAA, but this team’s ceiling will be determined by its supporting cast. Can the sophomore class, led by Preston Forst, Ethan Hu and Luke Maurer, take another step forward and contribute major individual points? -MH

Like their cross-state rivals Cavaliers, the Hokies have been looking increasingly locked-in as we approach championship season. Youssef Ramadan seems primed to defend his conference title in the 100 fly, and he should compete for a national title as well. Sam Tornqvist setting a school record in the 100 back could help their 400 medley relay a ton. ACC fans will note that I picked VT to finish ahead of UVA at ACCs. I think the two schools are likely to be close at NCAAs, but UVA’s roster is primed just a bit more for NCAA scoring. -RG

Youssef Ramadan seems primed for a massive sophomore campaign, and Sam Tornqvist put up a pair of massive backstroke swims at their first chance invite. -MH

The mid-season addition of Nicolas Garcia, an Olympic finalist in the 200 back, raised the Hokies’ ceiling. The Hokies have really high-value top-end swimmers, but they needed that depth to really secure their top 10 status. VT didn’t show much at their mid-season invite, so ACCs will be their chance to prove it. -BK

UVA hasn’t shown a ton yet this season, but that’s been their modus operandi the last few seasons. That 1:16.71 at the Cavalier Invite last weekend bodes well for championship season. -RG

While the retirement of Jack Walker hurts, Matt King seems to be heading in the right direction for championship season after a shaky invite. If both he can Brownstead can just repeat their 2021 performances this team will make some noise. -MH

River Wright‘s return against Ohio State could boost Michigan’s relays down the stretch, especially if he recaptures his 2021 form. For NCAA scoring, Michigan’s best bet is probably to train him straight through Big Tens and let him do a big taper in March. -BK

Georgia currently sits 17th on the Swimulator which is concerning until you take a deeper look. Matt Sates has now participated in a meet. Magahey missed their mid-season invite, but has been sharp at dual meets. When they have all their pieces they’re a top 5 contender. -AM

The ceiling is a few places higher, but seven feels about right for them right now. The Cardinals have been looking sharp in-season, including a 1:23.9 in the 200 medley relay a few weeks ago. They’ve got the potential to make the top eight in all five relays. I’m really curious to see just how fast go Petrashov, Sartori, and Loktev all go at ACCs. If Sartori and Loktev can quickly adapt to short course championship, they have the potential on paper to be another two A-finalists. -RG

Arizona State continues to impress above and beyond expectations. While they’ve had a few rough NCAA meets under Bob Bowman, they were much better going into the COVID-19 pandemic, adding points from seed at both the 2018 and 2019 championships. -BK

ASU’s sprint relays were lights out in November and held the key to a potential top 4 finish. Will they show their cards at Pac 12s, or wait for NCAAs? -MH

Brendan Burns is legit, and freshman Rafael Miroslaw has been great for the Hoosiers. The Hoosiers also routinely have one of the best diving programs in the nation, led by senior Andrew Capobianco. -MH

Indiana has a ton of momentum, and Bruno Blaskovic looking healthy feels big. The key to Indiana’s top 5 chase is if Josh Matheny can better his best breaststroke times coming out of high school. If not, Zane Backes’ medical retirement might knock them down to 6th. Feels weird that breaststroke would be the challenge for Indiana, but here we are. -BK

Will their big Fortnite win over the Gators give NC State confidence in the pool in March? I hope so, because swimming will have a meltdown if Braden Holloway credits Fortnite in his post-meet interview. -BK

This ranking (4th) is on shakier ground than it would be if Noe Ponti had stuck around and Alex Norgaard had ever showed up. Still, the Wolfpack has a combination of veterans and a historic freshman class that should make some noise this postseason. -RG

Gerry Quinn‘s absence from the SEC Championship psych sheets (and the whole second semester) after a very good mid-season invite is worrying for the Gators. They’ve still got some very big stars, and their relays are very good, but he just gave them a little more depth in the latter department that they’ll be without, for now. -BK

With Bryce Mefford back in the mix, Cal has to feel like they’ve got a shot at this meet, even with the Longhorns swimming exceedingly well. This feels like it’s going to be a big-time punch-counter punch meet, and the question for the Bears will be if they can ride the emotional wave through their weak events (like diving). -BK

I should just find old power rankings write-ups and change the names…while it seems most of us have Cal at #2, I don’t feel it’s quite that clear cut. This is yet another loaded roster, and it wouldn’t be surprising at all if the Bears end up tackling the Longhorns next month. -RG

No Jordan Windle, but the Longhorns have the top time in every relay right now, and 5 different swimmers who have an individual time ranked in the top 2 nationally so far this year. They’re still big favorites. -AM

No Jordan Windle, and for now it looks like he won’t rejoin the team, hurts Texas. But they still have mega diving points coming from Noah Duperre and Brendan McCourt, among others. Luke Hobson’s continued success gives the Longhorns a new weapon. -BK

Anyone else notice Wyatt Davis hasn’t swum for Michigan since December?

How is Miami an Honorable mention in the men’s division without a men’s team?

They do have a men’s team. They finished 19th at NCAAs last year.

Those diving points are just as valuable as swimming points

As far as Texas goes, this assessment of Texas diving is way off. Brendan McCourt scored 1 point at NC’s last year and is in line for another single digit output this year. Do your homework. Andrew Harness is a much more well rounded diver than McCourt but not a special talent. Texas diving is way down compared to last year.

“ASU’s sprint relays were lights out in November and hild the key to a potnetial top 4 finish. Will they show their cards at Pac 12s, or wait for NCAAs? -MH”

How can pitt not be on the list when John Hargis voted for himself #1 10 times?

John Hargis did not receive a vote.

Texas HAD “mega” diving points with Windle, but, while Dupere is a good diver he is no Jordan Windle. And McCourt is not in line to score but a few points. Harness is decent but again not capable of fireworks. I’d say they’ll be between 40-50. Which means the Cal Bears are definitely in it. It’s going to be another war. The swimmers seem to to least respect each other. Coaches not so much

You’re absolutely right. The swimmers ( I can speak for some guys on texas) very much respect the guys at Cal. I mean it’s hard not to. They are talented, hardworking guys.

wait there’s been beef between the coaches?

Y’all sleeping on some teams and over hyping others

Brilliant feedback. And I’m guessing around the end of March you’ll share which teams you were talking about.

The only team I might say is ranked too high is Indiana. Every other team is ranked in a good spot (give or take a spot or 2) in my opinion.

Why is IU ranked too high?

Agreed, not gunna be a homer and say _______ team should be higher, but there are a few teams on the list that didn’t lose any relay value/picked up some high quality studs while others lost a lot of value/more stagnant and former stayed relatively the same while the later moved up. Not gunna eat my socks on anything but i don’t think this list will be similar come final results in march.