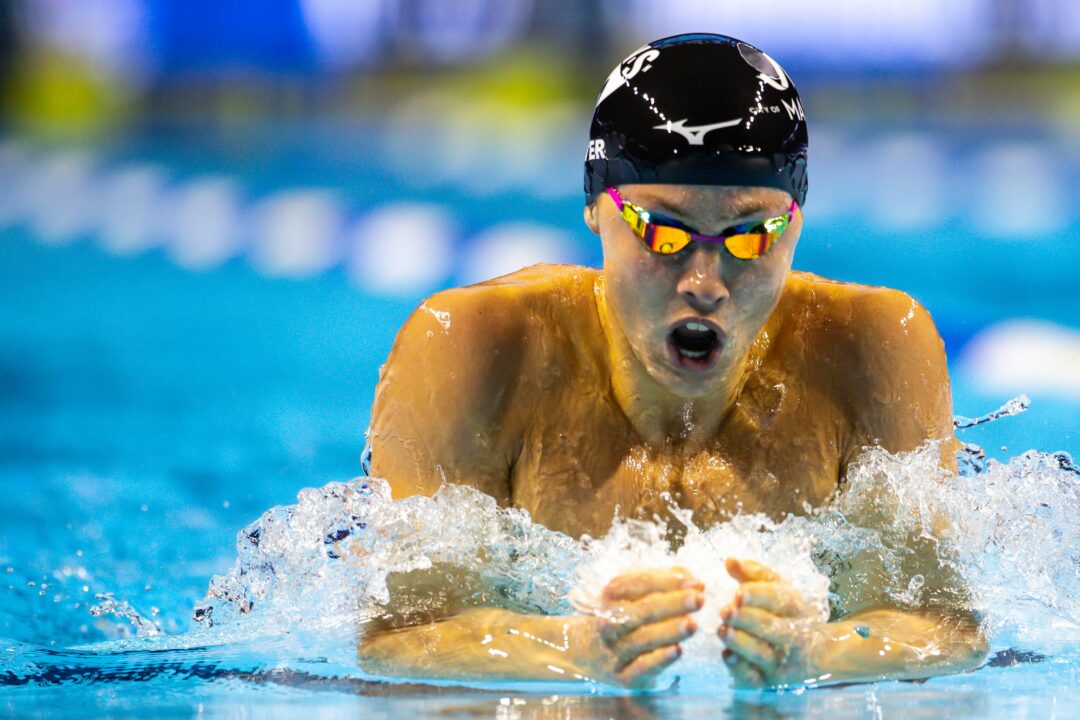 Carson Foster and the Texas Longhorns maintain the top spot in our November edition of the Men's NCAA Power Rankings. Archive photo via Jack Spitser/Spitser Photography

Several meaningful dual meets have gone down since our last rankings in October, and now we get a gauge of where we believe the men’s teams stack up as we head into invite season.

Things, for the most part, have stayed relatively the same at the top, while schools have jockeyed for position in the 10-25 spots.

Ultimately, the rankings are geared towards NCAAs, which is much more like an invitational than a dual meet, so we’ll have a much better idea where teams stack up in a few weeks.

With Anton Down-Jenkins on the boards, the Tar Heels will be putting up NCAA points. -JS

We don’t want to read too much into the dual meet loss against Wisconsin, because comes NCAAs, the Gophers are going to be putting up some big points with the presence of Max McHugh alone.

Alexei Sancov will be a driving force yet again for this team come March, but the return of Victor Johansson could be fruitful. -JS

Caio Pumputis and Batur Unlu have been swimming well for the Yellow Jackets. Big win over North Carolina on November 5. -JS

The team is still very much reliant on diving at the NCAA level, but has had some swimmers step up this season, such as Nicholas Sherman and Nikola Acin. -JS

The Seminoles are riding some momentum after beating Georgia Tech and Florida Southern in back-to-back weekends at the end of October. -JS

The team’s ranking hinges on the performances of Dean Farris, and he’s yet to really tackle his best events. -JS

After a tough matchup against Texas the Aggies had a confidence-building victory over TCU earlier this month. Art Adamson Invite will be a good litmus test for the group. -JS

We already knew Leon Marchand was the real deal, but he performed exceptionally against USC in a close battle with the Sun Devils. -JS

Derek Maas and Matt Menke were really solid against LSU, and freshman Kaique Alves is finding his way in yards and should be quick at their mid-season invite. -JS

Jack Dahlgren has been on fire for Mizzou thus far, and the team should feast on relatively weak competition at their home invite this weekend and gain more confidence. -JS

Andrei Minakov is just getting his feet wet in yards, but he’s already got some pretty strong early-season freestyle swims under his belt (19.7/43.3). I think he’ll really make his presence felt during invite season. -JS

The Hokies haven’t done much yet, but I expect to see them round into form as the season continues. -RG

Sure, they’ve suited up already, but the times have been tough to ignore — especially Will Chan having gone 52-low in the 100 breast twice already. -RG

If we factored dual meet scores into these rankings, Virginia would take a big hit after getting trounced by Texas. But, we do take note of dual meet times, and despite the lopsided score, the Cavaliers battled hard against the Longhorns, especially on the relays. -RG

This is a strong Buckeye team that’s already been clicking individually and on relays. Alex Quach appears to be the real deal; his 100 fly time of 46.2 is just about what his SCM time should convert to, and it’s still early in the season. -RG

I just love the way Ohio State looks this season. One of the best diving squads in the country, and I can’t stress enough what a benefit good diving is once NCAAs roll around. The return of Ruslan Gaziev has been and will continue to be huge for the Buckeyes, both individually and on relays. -SP

The Dawgs got handled by Florida pretty decisively and then came back with a narrow victory over Auburn. Urlando and Magahey look strong, but the arrival of Matt Sates can’t come soon enough. -JS

Unsurprisingly, the Wolfpack relays have already been off the chain (do the kids still say that?). They’ve already been 2:52 in the 400 free relay, and haven’t tapered or donned tech suits. -RG

The Hoosiers have put together some great early season times. Bruno Blaskovic hasn’t been quite as fast as we’re used to, but I see no reason to doubt that his speed will be there at the end of the season. Another thread to follow with this team: their freshmen divers have been winning at meets this fall. -SP

The Cardinals typically don’t show their hand until championship season; still, Murilo Sartori looks to be exactly the kind of impact pickup he’s projected to be. -RG

I tend to weigh early-season results more than the other voters do. However, while the Gators haven’t done much of note yet this season, I’m pretty stinking confident that they’ll deliver when it counts. -RG

The Bears have a stacked freshman class, but Gabriel Jett has stood out the most from that group so far this season, having already clocked a lifetime best in the 200 free. -RG

Doesn’t feel like we need much of an explanation here. Defending champs, with some truly great early season times to boot. -SP

I think the short, focused, and accurate rating of UT/Austin says it all:
THEY ARE VERY, VERY FAST — EVEN IN A BRIEF!

UNLV should atleast be in honorable mentions if you were to put GCU on here. Underated squad after beating Utah by quite a bit. Watch out for them this week at Tennessee Invite.

Right now, UNLV has one guy who looks like he could score points at NCAAs: Vuk Celic, who just missed scoring last year – though he hasn’t actually raced this year (he’s on the roster).

If you think they have another NCAA scorer that we’ve missed, we’re all ears.

There was a big push among the CSCAA poll committee to include UNLV in their dual meet rankings after that win, and they did jump to 23rd. It was a nice win. But beating Utah in a dual meet is not the same as scoring top ~30 at NCAAs.

What about auburn… almost pulled an upset against Georgia. I think swim swam needs some glasses because this list is way out of order.

Auburn should be in there. They look strong and close to beating Florida State!