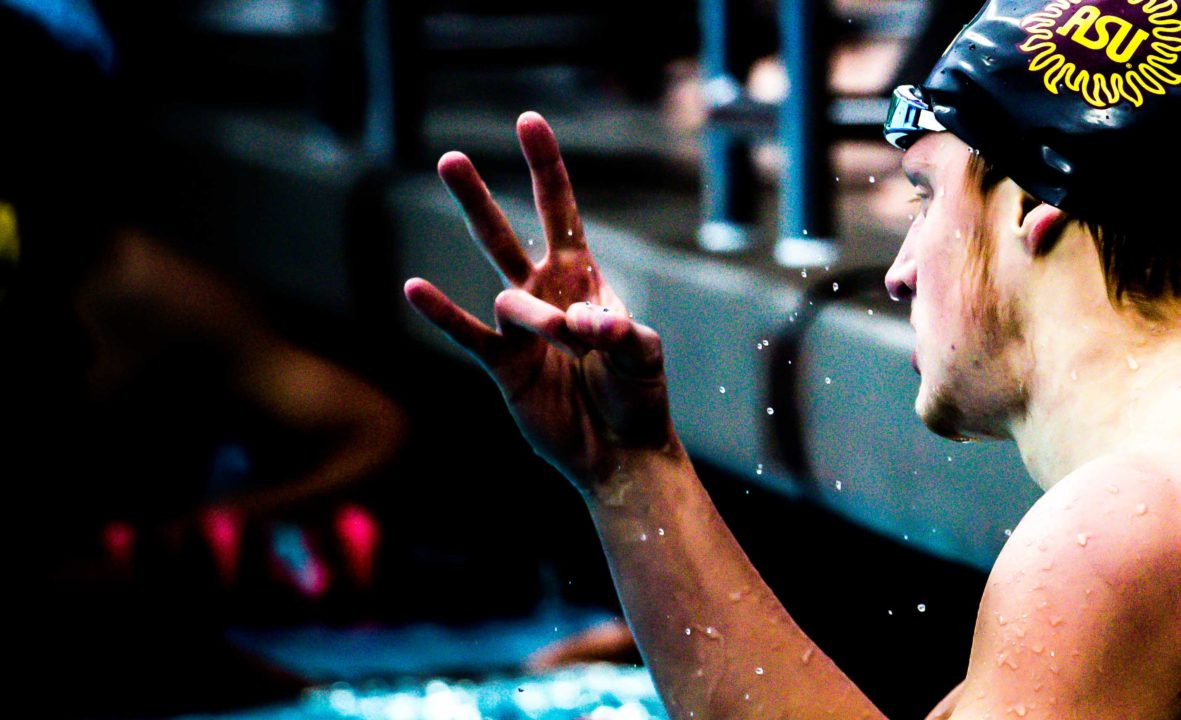 Arizona State's Grant House is one of the major reasons why the Sun Devils have surged up our most recent NCAA Men's Power Rankings. Archive photo via Jack Spitser/Spitser Photography

As in previous years, SwimSwam’s Power Rankings are somewhere between the CSCAA-style dual meet rankings and a pure prediction of NCAA finish order. SwimSwam’s rankings take into account how a team looks at the moment, while keeping the end of the season in mind through things like a team’s previous trajectory and NCAA scoring potential.  These rankings are by nature subjective, and a jumping-off point for discussion.  If you disagree with any team’s ranking, feel free to make your case in our comments section.

Michael Hamann contributed to this report.

Mid-season invites gave us a lot of clarity on the NCAA landscape as we move into the new year, with conference championship meets less than two months away.

The Arizona State Sun Devils are the biggest movers by a longshot, coming off a phenomenal performance at the NC State Invite that was spearheaded by freshman Leon Marchand. Check out our December Power Rankings below.

Federico Burdisso hasn’t quite mastered the transition to SCY yet, but if he can by March this will be a team that could make some noise with him and breaststroker Kevin Houseman.

Batur Unlu, Mert Kilavuz and Christian Ferraro all bring scoring-range times to the table for the Ramblin’ Wreck.

This team is all about senior breaststroker Max McHugh. Can some others take a step up to score a medley relay with his blazing breaststroke splits?

Does Brooks Curry have enough speed to carry a Tiger relay or two to NCAA scoring? He’ll certainly be a title challenger individually.

The Aggies always have a strong diving program, which will help complement some of their projected swimming points.

If the NCAA team title revolved around butterfly points, the Hokies would be in great shape. Unfortunately, VT’s depth in the other strokes hasn’t caught up to their stout butterfly group.

Dean Farris is the headliner, but Umitcan Gures holds the #3 100 fly time in the nation and they stack up well to put up big relay points.

Led by a strong senior class of Epitropov, Houlie and Mota, the Vols have the experience to handle March. Can they develop enough sprint freestylers to make noise in the relays?

Danny Kovac may be one of the most underrated swimmers in the NCAA and the Tigers have a sneaky high number of potential scorers. Don’t be shocked if this team challenges for a Top 10 finish.

Andrei Minakov could be a one-man wrecking crew for the Card come March and should be able to raise their relays to ‘A’ final scoring range.

Virginia is perhaps saving a big taper for ACCs (rather than mid-season invite), and by then Matt King and Jack Aikins should be in range for big individual points.

The biggest question mark about the Dawgs? The Omicron variant. WJR holder Matt Sates is potentially stuck in South Africa due to worldwide travel restrictions placed on the country. If he arrives in Athens in time to swim at NCAA’s UGA will challenge for a trophy.

Were missing a lot of key swimmers at the Purdue Invite, so it’s hard to put much stock into the team’s showing there. The potential of adding breaststroker Denis Petrashov next month could be big for them, but like Sates, who knows if that will pan out this season.

Leon Marchand has been a revelation and could feasibly win three individual titles. Add in some relay depth, plus Grant House, David Schlicht and Jack Dolan, this is a team that will be in the fight for a top-five showing.

Relays remain among the country’s best across the board, and I don’t think they showed all of their cards at their home invite. Kacper Stokowski is flying.

The Gators maintain their spot as a top three teams due to the strong senior class that’s led by Kieran Smith and Bobby Finke.

The Cal relays miss Ryan Hoffer, but they’ve got enough talent to be fighting for victories come NCAAs. The Bears are strong everywhere and had freshman Gabriel Jett show some massive improvements in Minnesota.

Texas holds strong at #1 after an impressive showing in Minnesota. Everyone from freshman Luke Hobson to grad senior Cameron Auchinachie was lights out. Jordan Windle potentially being out of NCAAs would knock their diving points down a ton, however.

I suppose qualifying these rankings as subjective is fair game, and it certainly generates a lot of traffic to the site. And maybe even at the end of the day, individual swimmers like Brooks Curry alone are good enough to score more points than some teams in NCAAs, but if you are going to include LSU in this, you should include Arizona and Brooks Fail along the same lines. And if ‘where they are at the moment’ factors at all, its pretty clear that Arizona/Fail is far ahead of Curry/LSU.

If the criteria for these ‘team rankings’ is just hocus pocus and crystal balls, then heck I suppose you can stick anyone in there.

I’ve said it from the first pre-season ranking, I think UVA finishes top 5. That being said, I think their ranking here is correct in being lower (not that my opinion on it matters, just saying I think its accurate right now).

Notre Dame getting snubbed again in the rankings after a good OSU Invite.

At present, Notre Dame has one individual swimmer (and no relays) in an NCAA scoring position. Josh Bottleberghe is having a great season, but unless Jack Hoagland comes back full-strength in the spring semester, it’s hard to see where they’re going to pick up another 20-25 points at NCAAs.

Putting us 17th is just laughable but oookay 🤣

I am surprised to see them knock VT down so many spots. Did they lose any points from graduation? I know some swimmers were missing at the invite. I think VT will score well in the BR, sprint free, mid distance free, and IM. I don’t see VT finishing outside of the top 12.

They lost one relay swimmer to graduation everyone else returned

When are the SwimSwam DIII power rankings coming out for December? 😉

Think of all the Kenyon / Denison fans losing it in the comments!! Click bait magic!

I don’t know if SwimSwam has a power ranking article, but the college coaches poll article for DIII was posted the other day.

Watch out for Vols at SECs baby!

Yes the boyVOLForeign Legion will show up for sure

Not sure why Indiana lost a few spots, especially they swam and dove at the OSU meet.

Best part about all the whining here is that it doesn’t matter !!!

Maybe Braden hates Auburn, or can’t stand LSU, but his opinion and the article have no relevance on the outcome of NCAA’s (unless he bribes off the officials or creates a current in only the Auburn lanes….)

So everyone chill out and remember, nobody cares who got 16th place anyway…..