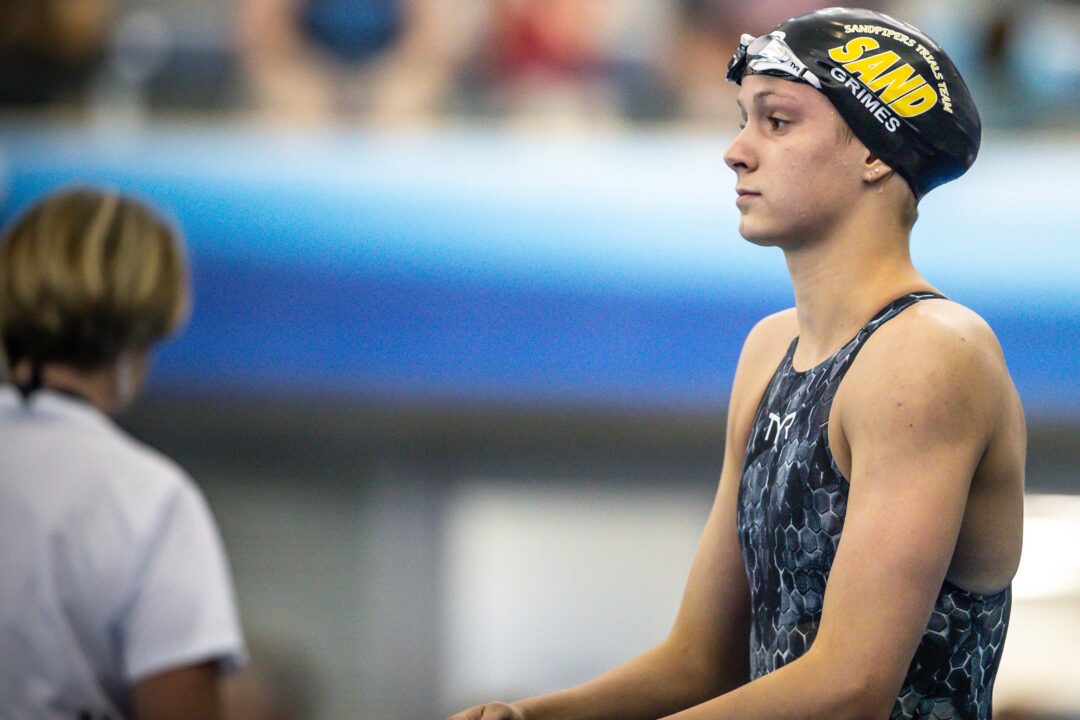 Grimes has dropped the women's 200 back and will instead race the 200 free, having qualified eighth overall out of the prelims in both events. Current photo via Jack Spitser/Spitser Photography

Katie Grimes is the lone swimmer to scratch out of an ‘A’ final for Wednesday night’s session from the 2022 U.S. International Team Trials in Greensboro, as the 16-year-old drops the women’s 200 backstroke after qualifying eighth in this morning’s prelims.

Grimes took off more than a second from her best time this morning, clocking 2:11.31, but opts out of the final in favor of the 200 freestyle, where she also advanced eighth overall in the heats in a time of 1:58.67. That swim also marked a new PB, downing her previous mark of 1:59.42, and puts her in the hunt for a berth at the World Championships, with the top-four finishers automatically qualifying for the women’s 800 free relay and the fifth and sixth-place finishers potentially getting named to the team depending on roster numbers.

A 2020 U.S. Olympian in the 800 freestyle last summer, Grimes placed fourth in that event on Tuesday night.

If Grimes opted to take on the 200 free/200 backdouble, she would have approximately 46 minutes between heats (with the 200 free coming first).

Torri Huske and Melanie Margalis have both scratched out of the women’s 200 free ‘B’ final, as has Justina Kozan, who was 18th in the prelims but would’ve had a spot in the consols after the Huske and Margalis scratches.

Natalie Mannion and Chloe Stepanek now move up into the ‘B’ final. Mannion will also swim the championship final of the 200 back, with 50 minutes separating the two heats according to the published timeline.

Huske, who already qualified for the World Championship team by winning the 100 free last night, will swim in the 50 fly final later in the session.

The lone scratch in the men’s 200 free comes from Patrick Callan, who was a U.S. Olympian last summer in the 800 free relay. Callan was 14th in the prelims, and his withdrawal bumps Zane Grothe up into the ‘B’ final.

10th-place finisher Jason Louser has dropped the consolation final of the men’s 200 breast, moving Matthew Lucky into the ‘B’.

In the ‘C’ final, which is primarily for 18 & under swimmers, Ozan Kalafat scratched, which left two open lanes for any remaining swimmers (of any age) to take. Connor Morikawa and Alex Sanchez will now swim in the outside lanes tonight after placing 20th and 23rd, respectively, in the prelims.

The lone scratches in the men’s 200 back came in the ‘C’ final, as Amadeusz Knop dropped out which moved in Landon Driggers. Two additional 18 & over swimmers, Jared Daigle and Zachary Cram, declined their spots so there will be one empty lane in the final.

Veteran Tom Shields has scratched the men’s 50 fly ‘B’ final after placing 15th this morning. Charlie Morici takes his spot in the consols, while Alexander Colson moves into the ‘C’ final. All swimmers who contested the race this morning (minus Shields) get a second swim.

Dang, if Grimes, Sims, and Weinstein make the 800 Free Relay, that would be a cool story. 3 members of the same club represent half of the relay team!

With the possibility of the entire men’s relay being from Texas, too.

She can be the american Zhang Yufei 🔥

So she can’t even swim the event today because she might have a future conflict? Why? I guess Michael Phelps should have scratched all his events after 400 IM.

I thought Grimes scratching might be the case. She will have to race hard tonight to make the team in the 200. Better to focus.

Grimes was expected, Huske makes sense I guess, unfortunate for Margalis, and I’m just happy Shields showed up in the first place