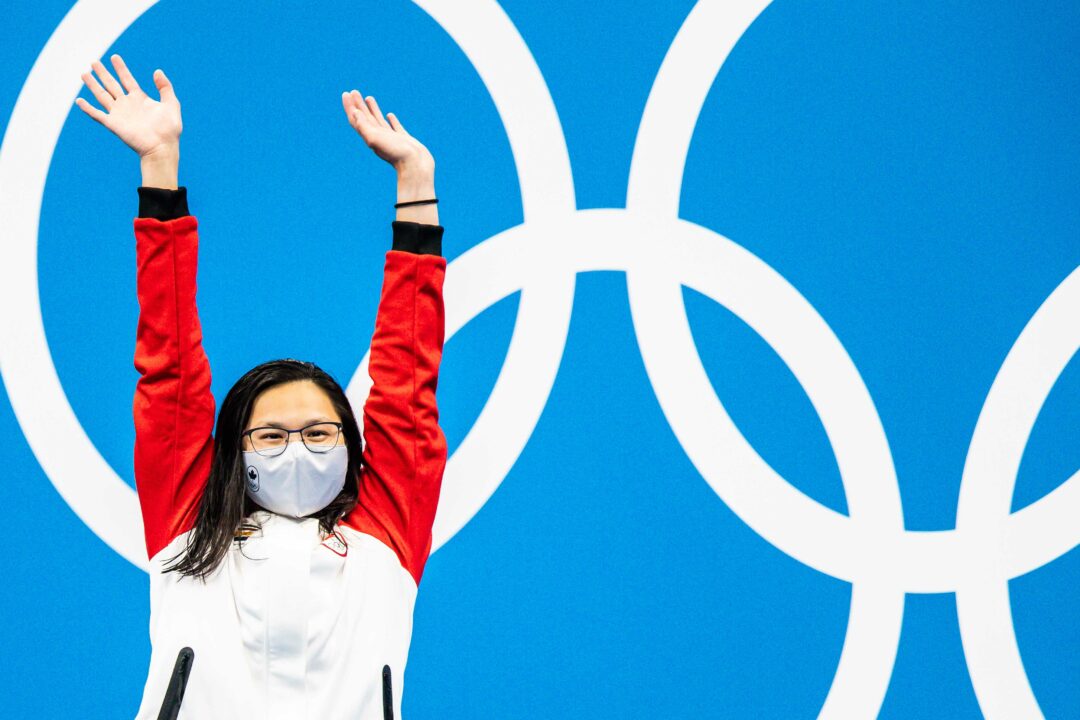 With a slew of Olympic finalists, the women's butterfly events are set to be some of the most anticipated of the 2021 SC World Championships. Archive photo via Jack Spitser/Spitser Photography

Dutch sprinter Ranomi Kromowidjojo may be Sjostrom’s biggest threat here. Traditionally a sprint freestyle swimmer, Kromowidojo has a strong SCM butterfly and she raced this event several times during the ISL season for Team Iron, going as fast as 24.62. In fact, in 2018, Kromoidojo out-touched Sjostrom to claim the gold medal in this event, posting a lifetime best of 24.47.

Although those two will lead the battle for gold, there are several other swimmers ranked in the top 10 in the world this season set to compete, including Australian Holly Barrat and The Netherland’s  Maakie De Waard, both of who may contend for a podium finish. Canada’s Maggie MacNeil, who is the reigning Olympic Champion in the 100 butterfly, is also a name to watch for, as she currently holds the fastest 100 butterfly of all time in the SCY pool. Although she is only seeded with a time of 25.13, MacNeil has proven to be significantly faster when rested. Americans Torri Huske and Claire Curzan also hold SCY prowess that may translate well to the SCM pool in this event.

Even with a loaded field that includes the Olympic gold and silver medalists and 6 of the 8 finalists from Tokyo, the women’s 100 butterfly features a notable absence in the form of Kelsi Dahlia. At the ISL finale less than 2 weeks ago, Dahlia dropped a new world record in the event, swimming to a time of 54.59. Despite her performances in the ISL, Dahlia was not selected to the American roster for this meet due to the fact that 2020 Olympians Torri Huske and Claire Curzan both elected to retain their spots on the roster after beating Dahlia at trials. There are still many swimmers in the field who will look to contend for gold, and possibly challenge Dahlia’s mark.

Maggie MacNeil, who is going into the meet during a successful senior season at Michigan, enters the heavy favorite given her strong performances in both the SCY and LCM versions of the event. In long course, she is the second fastest performer in history with her 55.59 from Tokyo, while she also is the fastest SCY performer in history after dropping a 48.89 at the 2021 NCAA Championships. In the SCM pool, MacNeil has already been 55.33 this season, which ranks her as the 4th fastest swimmer in the world, despite not participating in the ISL. Given that, plus her ability to produce major performances when she’s rested, MacNeil is in a strong position to contend for gold.

Yufei Zhang, the Olympic silver medalist in this event, is slightly more suited for the long course pool given her Olympic gold medal in the 200 butterfly. In addition, she has not competed since Tokyo, making it slightly unclear as to how her performances will be this weekend. Despite this, Zhang will still be a strong challenger to MacNeil, given her speed over both butterfly distances and her strong underwaters.

The aforementioned Americans Huske and Curzan currently rank as the 1st and 3rd fastest Americans in history in the long course 100 butterfly, and are both two of the fastest SCY butterfliers ever. However, neither swimmer has a lot of experience in the SCM pool system that is rarely used in American swimming. With this, it is difficult to predict how they will face the adjustment between courses. However, assuming their LCM times and SCY times align with their SCM performances, at least one of the Americans will probably make the podium here.

A ton of other big names entered here, including Olympic finalists Louise Hansson, Marie Wattel, and Anastasiya Shkurdai. Expect Hansson to be a major contender here, as she currently ranks 1st in the world in this event amongst the swimmers entered to compete with her 55.26 from the ISL. Another prominent SCY swimmer, Hansson has translated her speed over to the SCM pool, and will push the field with her underwater prowess.

With a significantly less crowded field, Yufei Zhang appears to be the clear contender in the 200 butterfly after demolishing the field in Tokyo with a time of 2:03.86. Despite a lack of recent performances as mentioned above, Zhang’s lead over the remainder of the field appears to be large enough, as her time from Tokyo converts to a 2:01.07 in the SCM pool, over 2 seconds faster than any other swimmer has been this season.

The only other Tokyo finalist entered to compete is Russian Svetlana Chimrova, who currently holds the #3 time in the world this season with a 2:03.76. Chimrova recently won the European Championships title in the event, and will look to carry her momentum into this meet. At those Championships, Italian Iliara Bianchi placed third in a time of 2:05.43, claiming a bronze medal. Assuming she is able to hit the same time this week, she will certainly be in contention for a medal.

Hungarian Zsuzsanna Jakabos and Bosnia and Herzegovina’s Lana Pudar were both finalists at the European Championships as well, who could push the field. Pudar at only 15-years-old placed 5th at those Championships with a huge personal best of 2:05.89. Given her young age and recent performances, Pudar could see another big drop that pushes her towards the podium.

American Charlotte Hook is another young swimmer to watch here, as she enters the meet seeded with a time of 2:06.15. Hook narrowly missed making her first Olympic team this summer at 17-years-old, placing third in this event behind Regan Smith and Hali Flickinger. Another strong SCY performer, Hook will see a large advantage with the additional walls used in the SCM pool.

I think Charlotte Hook will be good. I think she has learned a lot from being in that position at trials (3rd). She will have a strong lady 50, and probably challenge for a medal. Great athlete and definitely a name to watch for in the future.

I feel like I could see Huske sneaking onto the podium in the 50. She just has so much out speed!

Holly Barratt will beat MacNeil in the 50. Barratt has consistently broken 25 while MacNeil is yet to do so.