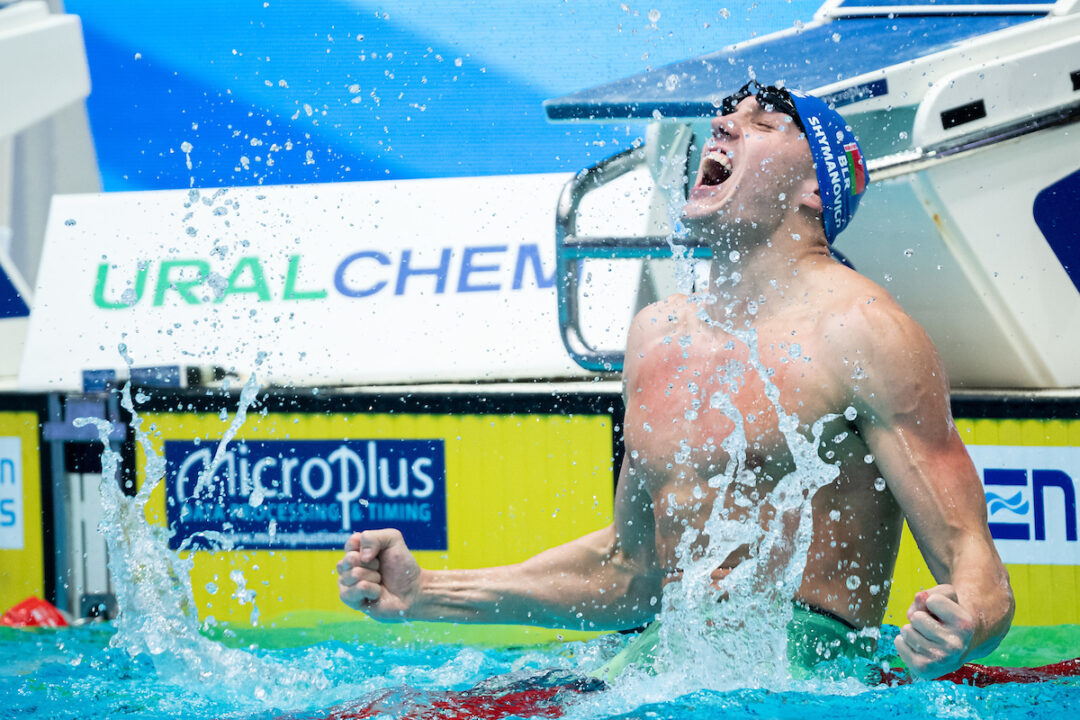 Perhaps the most notable aspect of this men’s 50 breaststroke field is that it doesn’t include Great Britain’s Adam Peaty, the most dominant men’s breaststroker in the world currently. However, even if Peaty were racing in Abu Dhabi, there’s absolutely no guarantee he would win, or possibly even medal. There are 3 swimmers in the this field who are seeded faster than Peaty’s personal best of 25.41.

Leading the way is Belarusian 27-year-old Ilya Shymanovich, who swam a 25.25 last month to tie the World Record. Shymanovich, who won European Championships Gold with the performance, enters this meet as the favorite.

Also in the upper echelon is Italian 22.year-old Nicolo Martinenghi, who comes in with a 25.37, which he swam at Euros as well, and was good for Bronze. The top 3 seeds (Shymanovich, Sakci, and Martinenghi) have a nice margin of separation over themselves and the rest of the field.

Coming in at 4th is Nic Fink out of the U.S., who enters with a 25.84. Netherlands’ Arno Kamminga is tied for 4th with Fink. Both swimmers are better at the 100 and 200 breast, but it’s certainly possible they could pop off a big swim and surprise some people here.

Germany’s Fabian Schwingenschlogl is the only other swimmer in the field seeded under 26 seconds, coming in with a 25.88 for 6th. USA’s Michael Andrew, who came in 4th in the LCM 100 breast at the Tokyo 2020 Olympics, can’t be counted out either. He’s seeded at 26.02, a time which he swam in the fall of 2020, and faces an uphill battle to get into the low 25-range, but Andrew has proven to be an elite and versatile sprinter over his career.

5 of the finalists from the Tokyo 2020 Olympics are set to compete in the 100 breast this week, including the Silver and Bronze medalists. Arno Kamminga (Netherlands) had an electric summer of LCM racing, getting under 58 seconds for the first time, and winning Silver in Tokyo. He’s the #4 seed for this week, coming in with his season best of 55.79, which he swam at the European Championships  in Kazan back in November.

Italian star Nicolo Martinenghi earned a Bronze medal in Tokyo, and is the #2 seed this week. Martinenghi has been as fast as 55.63, which he swam this fall to win Gold at Euros.

Neither swimmer is the favorite in the event, however, as Belarus’ Ilya Shymanovich broke the World Record just a few weeks ago. Shymanovich is both the top seed, and has the fastest personal best in the field, making him the man to beat.

Huseyin Sakci is live here as well, entering as the #3 seed with a 55.74 from last fall. Sakci has been 56.25 this year. The USA’s Nic Fink and Germany’s Fabian Schwingenschlogl are tied for the 5th seed at 56.16. Fink is coming off a phenomenal end to the ISL season, wherein he posted a 55.56 in the ISL finals. That swim makes Fink the #2 swimmer in the world this year, behind only Shymanovich.

Michael Andrew (USA) finished 4th in Tokyo, but finds himself seeded 16th heading into this meet. Andrew can certainly go faster than his 57.54 seed time, and he’ll need to, if he wants to advance out of prelims. Similarly, China’s Yan Zibei, who tied for 6th in Tokyo, is seeded 21st this week.

Former World Record holder Marco Koch of Germany earned the #1 seed for this meet with his 2:00.58 from last fall. Koch, who turns 32 in just a few weeks, hasn’t been as fast this year, however, posting a 2:04.36 at his fastest, back in September. At the European Championships last month, swimming just 2:05.13. With all that being said, it’s hard to know what to make of Koch right now. At his best, he’s one of the fastest 200 breaststrokers in history, but it’s hard to tell exactly where he’ll be at.

Mikhail Dorinov (RSF) and Erik Persson (Sweden) will keep things interesting, as both head excellent swims at the European Champs, clocking times of 2:02.07 and 2:02.18 respectively.

MA will be watching finals from the stands.

If Shymanovich sweeps the breaststroke events, I’ll (not actually) eat my goggles.

Shymanovich may win one, MAYBE two, but he certainly ain’t winning all three.

9
-1
Reply
The condors were robbed

Predictions for Dolphinovich : 55.1 WR in the semis, 2nd in the final

Putting Koch on the podium over Fink? That’s crazy talk

Might be. It was a hard decision on what to do with Koch. He went that 2:00.5 just 13 months ago. It’s just hard to believe he could have fallen off so much in such a short period of time.

Well if he is a big taper swimmer I would agree/

He looked pretty bad at the Olympics. I wouldn’t bet on him coming up clutch here, frankly.

Rooting for dolphinovich. Hoping he doesn’t choke when it matters though.

No love for Fink. Probably the hottest breastroker at the moment…..he might be entered slower than times he went in Eindhoven. At least he won’t have the Swim Swam jinx! 😏