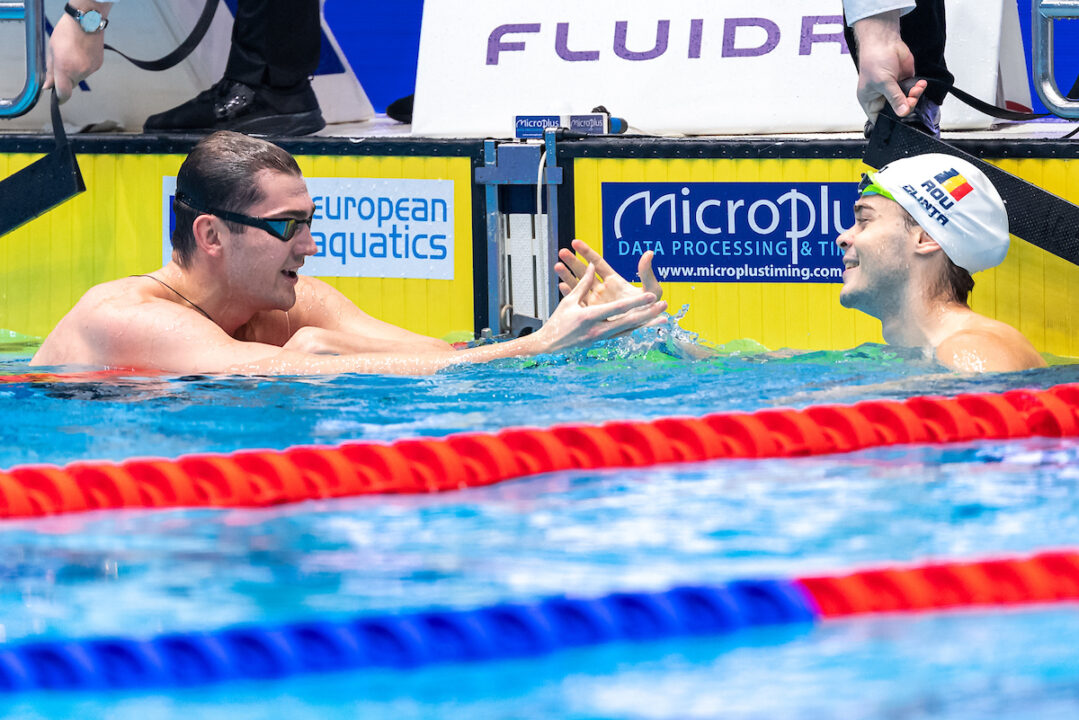 Russia's Kliment Kolesnikov and Romania's Robert Glinta will go head-to-head in the men's 50 and 100 backstroke at SC Worlds, just like they did at Euros. Archive photo via Giorgio Scala / Deepbluemedia / Insidefoto

The men’s backstroke events at the Short Course World Championships in Abu Dhabi project to be a rematch of sorts between the top competitors from the SC European Champs from early November.

The majority of the top seeds are European, and are just over a month removed from battling head-to-head in Kazan. They’ll do battle once again at Etihad Arena over the next six days, and a few international competitors will look to shake things up at the top.

Russia’s Kliment Kolesnikov comes in as the big favorite in the men’s 50 back after delivering the second-fastest swim in history at the European SC Champs in early November.

Kolesnikov clocked 22.47 to win gold in the final in Kazan, second all-time behind Florent Manaudou‘s otherworldly 22.22 from 2014, and is also coming off of breaking the world record in the LCM event in May (23.80).

Behind Kolesnikov are his podium mates from Euros, Italy’s Michele Lamberti and Romania’s Robert Glinta, who rank second and third on the psych sheets with respective best times of 22.62 and 22.74—both set at Euros as well.

Unlike some other swimmers in the field, Lamberti hasn’t been racing week in and week out in the ISL since Euros, and Glinta has been off for a few weeks after Iron didn’t make the final. This could give them a bit of a mental edge on their ISL foes.

A trio of other Europeans will also be in the mix for medals having broken 23 seconds this year: Russia’s Pavel Samusenko(22.81), Germany’s Christian Diener (22.83) and Greece’s Apostolos Christou (22.87).

Brazilian Guilherme Guido is the second-fastest swimmer in the world among those competing in Abu Dhabi, having clocked 22.60 early in the ISL season, but his performances steadily declined during the playoffs, only cracking 23 seconds once in his six final swims in Eindhoven.

His countryman Gabriel Fantoni has also been sub-23 this year (22.93).

Shaine Casas, who opted to turn pro and forgo his senior season at Texas A&M in the NCAA, will be the lone American in the event, though he’ll probably be more of a medal threat in the 100 and 200 back. Casas has no SCM 50 back swims on record, but is among the best in NCAA history in the SCY event (typically only raced as a medley relay lead-off) with a PB of 20.61.

Kolesnikov comes in as the huge favorite as the men’s 100 back as well, and could potentially take a run at the world record that Coleman Stewart stole from him back in August. Kolesnikov set the world record last November in 48.58, and Stewart brought it down to 48.33 in late August.

Kolesnikov, who won bronze in this event at the 2018 SC Worlds, took huge strides in the LCM 100 back this year, winning Olympic silver in a scorching time of 52.00.

The Russian was a workhorse for Energy Standard in the ISL this season, meaning he often strayed away from this race to help out elsewhere. But there’s no doubt he’s the class of the field here and shouldn’t have a problem in claiming gold. His fastest swim this year came at SC Euros, where he was the victor in 49.13.

Robert Glinta was a close runner-up to Kolesnikov at Euros in 49.31, a personal best time by three-tenths, and puts him in good position to get on the podium in Abu Dhabi.

The fastest swimmer in the field from 2021 is Brazil’s Guido, who was a PB of 48.95 in the ISL in September but only managed a 50.37 in the ISL Final at the beginning of this month.

The same can be said for some of the top seeds, however, as Apostolos Christou went 50.16 and Christian Diener was 50.43 in the ISL Final. Whoever has taken advantage of the brief break since then and can hit their taper will reap the rewards on the podium.

Christou was sub-50, a PB of 49.87, to win bronze behind Kolesnikov and Glinta at Euros.

Three swimmers lurking under the radar with low seeds on the psych sheets are Italy’s Thomas Ceccon, Spain’s Hugo Gonzalez and America’s Casas.

Ceccon, who was fourth at the Olympics this summer, owns a best time of 50.40 from the ISL season, but didn’t race the event at SC Euros so likely has more in the tank and could very well be sub-50.

Gonzalez is certainly better in the long course pool in this race—more suited to the SC 200 back—while Casas has been sub-44 in yards which makes him an imminent threat to be in the 49s.

However, it’s tough to pick Casas, who has virtually no SCM experience, over some of the other swimmers who have racing the format endlessly in recent months.

The other American entrant, Hunter Armstrong, has pulled out of the competition.

While Kolesnikov is the top billing by a long shot in the 50 and 100 backstroke, the men’s 200 back is a bit more wide open with a myriad of contenders. But it’s the veteran Radoslaw Kawecki that’s clearly the man to beat, given his continued success over the last decade.

Kawecki is coming off of winning his sixth SC Euro title in the event last month, and is the only swimmer in the field that’s been sub-1:49 this year (1:48.46).

His primary challenger appears to be Germany’s Christian Diener, who had his best time of 1:49.14 on the books for seven years before taking a tenth off it during the ISL playoffs in 1:49.04. He’s been sub-1:50 three times in the last month, which makes him a good bet to be there (or better) in Abu Dhabi.

As for Casas, he’s certainly a medal threat given that he’s the second-fastest SCY swimmer ever in 1:35.75. He’s also been gearing up for this meet for the last few months, compared to his competitors who have had busy schedules. That could work in his favor, and given the field being relatively weaker in the 200 than the 50 and 100, this could be his best shot at a medal.

Hot take: casas sets 3 world records and coleman stewart posts on his instagram story about how if he were there he could’ve won

No way this happens.

Agreed. Hopefully the fact that him and Dahlia aren’t going to be competing in the events they hold the WRs in will be eye-opening for USA Swimming to change the section criteria for next time

And usa swimming changes to Scm times to qualify, and ISL dissolves in a year, then what?
Qualifying has to be open to everyone and not just post grads! There will have to be a SCM qualifying meet….college and high school swimmers need the opportunity to qualify too!

If the ISL dissolves in a year then hold a SCM trials. No reason for selection process to be laid out as far in advance for SC Worlds as it is for LC. In the mean time, if a coach has a HS swimmer who could qualify, it should be on them to find a SCM meet to meet qualifying standards. There’s only a few of them in the country that this applies to. Curzan raced SCM a couple weeks ago because it was a priority for her coach.

The selection process should always be about selecting the fastest possible team. The current procedures are not that.