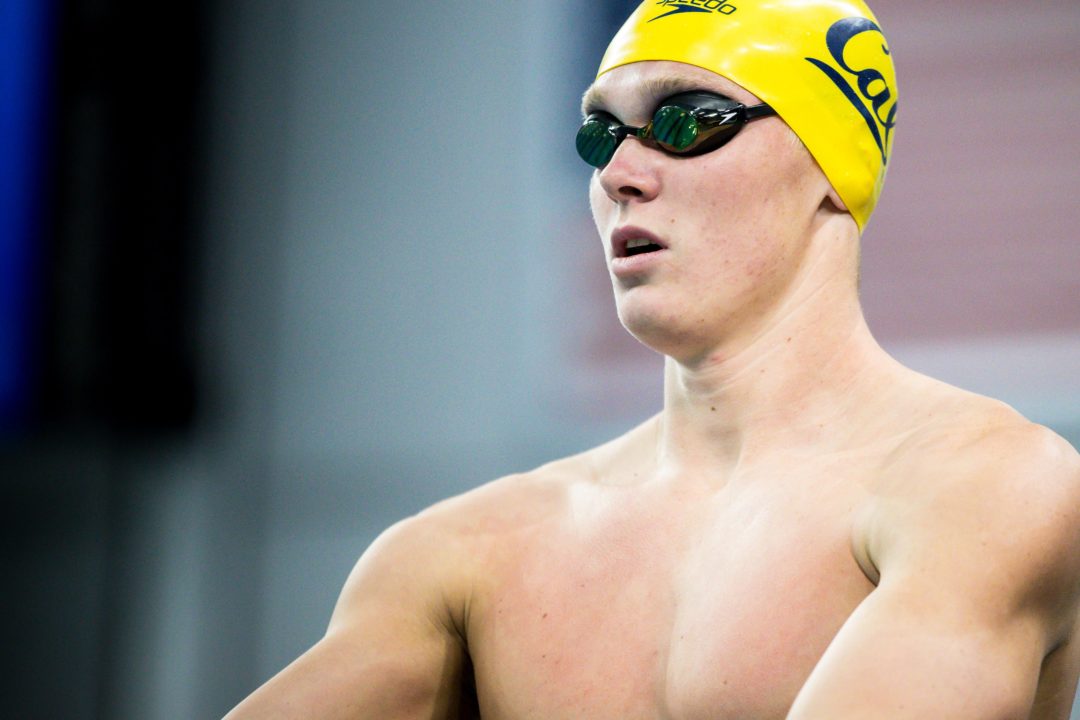 Trenton Julian (above) is the 3rd-fastest 200 butterflier in history but Nic Albiero will be fighting to deny him the title at this year's NCAA Championships. Current photo via Jack Spitser/Spitser Photography

The men’s 200 fly at the 2021 NCAA Swimming & Diving Championships will be one of the most stacked events at the meet. Not only did 7 swimmers manage to get under the NCAA ‘A’ cut this year, but the top 4 seeds in the event are entered already with times that would have earned a podium finish at 2019 NCAAs.

While Julian is the top seed, it won’t be a runaway for him as Louisville senior Nicolas Albeiro sits at #2 with a 1:39.08 from ACC Championships. That roughly half a second gap is enough to give Albeiro a shot at besting Julian but what’s even more indicative of his potential is Albeiro’s 2020 swim of 1:38.65. Albeiro dipped under 1:39 to claim the 2020 ACC title in the event, making him the only other swimmer in this year’s field who has been under 1:39.

With little to distinguish the two sophomores, we’ll give the upper hand to Julian here considering his more recent PB-breaking momentum that could very well lead him to the top of the podium this year.

While Julian and Albiero lead the way, a number of other swimmers in the event have spent the year posting some of the fastest-ever 200 flies on record. Texas senior Sam Pomajevich swam a 1:39.19 back in December which ended up being the 3rd fastest time this season heading into NCAAs. Right behind him, Indiana sophomore Brendan Burns was a 1:39.22 to win this year’s Big 10 title.

Those swims account for the 14th and 15th times ever in the event. Both of those swims are also PBs for Pomajevich and Burns. Pomajevich raced the event at Big 12s for Texas but swam exhibition and was far off his best December swim, hitting a 1:47.17 for 7th in the prelims.

We haven’t seen Pomajevich at his best yet in 2021 but with lots of time to prepare, he will likely come into NCAAs ready to race and will be looking to score big for Texas.

Burns and Pomajevich are joined by one more sub-1:40 swimmer this year; Virginia Tech junior Antani Ivanov. Ivanov is lined up to qualify for his first-ever NCAA final in the 200 fly, having placed 12th back in 2019 as a freshman with a 1:41.48 in the B final. Since then, he has lowered his best time to a 1:39.82 which he swam at last month’s ACC Championships, taking silver to Albeiro.

Last season, Ivanov had a similar season-best to the year before, hitting a 1:41.01. Now that he’s gotten into the 1:39 range, he’ll be in the mix for the battle for bronze.

So far, we have a decent battle for bronze between 3rd, 4th, and 5th seeds Pomajevich, Burns, and Ivanov. As the only ones who have been under 1:40 this season, on paper they are in the best position to join Julian and Albeiro on the podium. There are a few seeds further down on the list, however, who we can’t count out yet.

For example, Georgia is sending the solid 200 fly duo of Luca Urlando and Camden Murphy who currently sit a 7th (1:40.67) and 9th (1:41.12), respectively. While those times won’t be fast enough to infiltrate the top three, both Urlando and Murphy have proven in the past that they have a higher ceiling than what they’ve done this year.

We have not yet seen an NCAA Luca Urlando at full force. For one, he is currently in his freshman year at Georgia, meaning that he hasn’t yet been present at NCAA Championships. We got a look at his 200 fly at SECs last month when he won the 200 fly. He swam slower there (1:40.93) than he did back in November (1:40.67) indicating that with a taper for NCAAs, he could be a decent bit faster.

The one thing that may hold Urlando back is whether or not he commits to a full taper for peak performance at NCAAs or if he decides to save up a bit with his sights set on USA Trials in the near future.

Urlando’s teammate Camden Murphy was a 1:41.12 as SECs to take silver behind Urlando. Similar to Urlando, his SEC performance was right around where he was back in November when he raced a 1:41.23. That opens up the possibility that a fully tapered Murphy unleashes a swim closer to his PB of 1:40.62 or faster. Combining the potentials of Urlando and Murphy, the race for bronze gets a lot more interesting.

Given his performance on the international scene and the factor of the unknown within the NCAA, we’ll give the nod for bronze to Urlando.

Filling out the top 10, Christian Ferraro from Georgia Tech has hit a 1:40.64 for 6th seed, Alexei Sancov has hit a 1:41.04 for 8th seed, and William Kovac has been a 1:41.24 for 10th seed. Those three season-bests also account for their fastest-ever swims. Barring some big drops, Ferraro, Sancov, and Kovac will be racing each other for the 8th spot in the A final to join our previously explored top 7.

Dark Horse: David Dixon, West Virginia (SR), 19th Seed – David Dixon is entered with a 19th place seed in the 200 fly with a 1:42.55 but his PB puts him a little more within range to crack the top 8. Dixon swam a 1:41.59 back in November 2019 and recenetly won bronze at Big 12s. Considering the lack of competition at his conference meet, its possible that Dixon will be aiming to swim a bit quicker at NCAAs next week. Is that’s the case and he can swim near or under his PB, he likely won’t be in contention for a medal but could look at breaking into the A final.

Dark Horse Tomer Frankel! Won the 100 fly at Big Tens and also A finaled the 2free/1free, but he is entered in both of the butterflies for NCs. Considering he won the 100 fly and was second in the 2free at Bigs, it’ll be exciting to see what he can do in the 2fly

I’ve heard that senior from IU Corey Gambardella is going to go really fast, as he has been eating his vegetables this week and no pop tarts for the last 2 months

This field is just so hard to choose from but I gotta see something like a Julian, Albiero, Burns and Pomajevich top 4 (I honestly dont know the order put prob down to a touch) with Georgia and V-Tech (Ivanov and Manoff) putting two swimmers each. Hopefully a senior gets to end their (supposedly) college swimming career but I would not be upset with a freshman winning it all either.

It’s worth looking at the splits from a few races when analyzing races.

Two things that stick out are that 1) Julian splits the classic Do-re-mi and that Albiero doesn’t usually swim that way, and 2) Albiero’s last split at 2021 ACCs in finals is an anomaly.
The 400 free relay mattered at ACCs and Albiero split 41.7 after the 200 fly.
Draw your own conclusions

What conclusion do you draw?