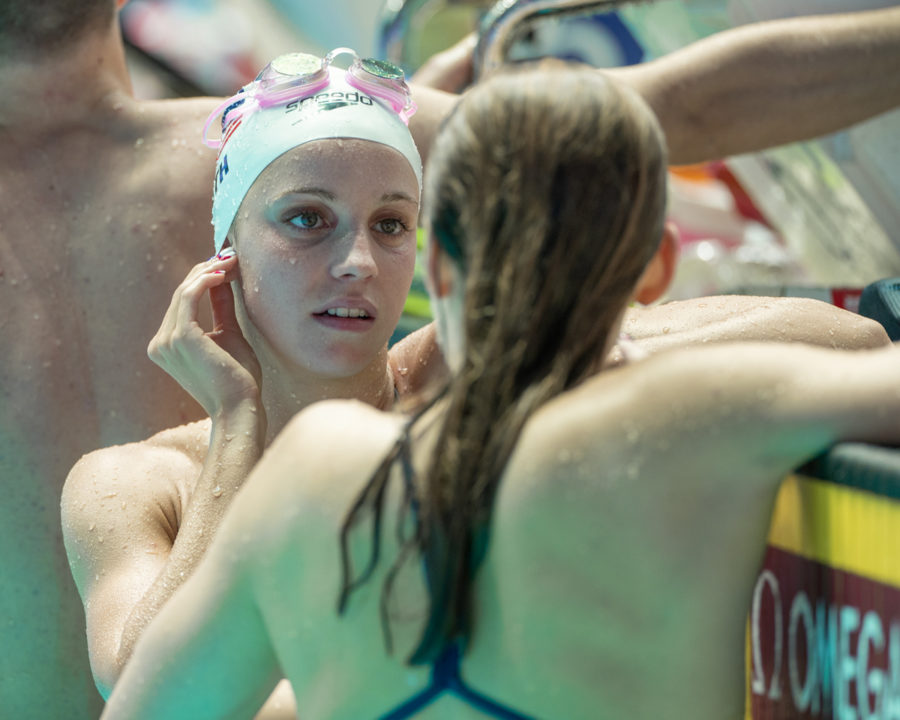 Speaking realistically, only about half of those World Records are in danger (sorry, Phelps). Unless Ledecky makes a ridiculous rebound, the women’s 800 free is safe. The suited men’s 4 x 200 freestyle relay is also quite safe, though the men’s 100 fly and 50 freestyle records have to face an oncoming Caeleb Dressel, and the women’s 50 fly showcases its own record holder in Sarah Sjostrom.

Day 5 of the 2019 FINA World Championships was pretty exciting: First, Boglarka Kapas made it a Hungarian sweep taking gold in the women’s 200 butterfly. Caeleb Dressel and Kyle Chalmers went head-to-head in the men’s 100 free with Dressel barely getting the better of Chalmers in a new American Record time of 46.96 to Chalmers’ 47.08. Matthew Wilson tied the World Record in the men’s 200 breaststroke in the second semifinal. Co-World Record holder Ippei Watanabe of Japan nearly chased down Wilson in the final stretch. In the final event, both Australia and the United States broke the World Record in the women’s 4 x 200 freestyle relay, but Australia got the gold.

So, are you ready for more?

The men’s 100 butterfly, women’s 200 backstroke, men’s 50 freestyle, and women’s 50 butterfly will all advance the top 16 swimmers to the semifinals tonight. From there, the top 8 qualifiers will race in the championship final tomorrow. The 800 freestyle will advance only the top 8 to the final tonight, but the top 12 will punch their ticket to the Tokyo 2020 Olympics. The women’s 800 free, meanwhile, will advance the top 8 qualifiers to the final tomorrow evening.

Interested as to how the US will form its relay line-up for prelims
Based on the individual, I would think they would make Haas and Seliskar earn their spots and save Apple and Pieroni directly for finals. I think Seliskar is close to his best form at this meet, his prelim swim was relatively easy and he just got too excited for the semis and went out way to fast, I’d lead him off and I think (if he swims it how he usually does) he will drop a 1:45 high/1:46 low.
Hopefully they swim SELISKAR – LEVANT – GROTHE OR APPLE – HAAS in prelims and lead-off SELISKAR OR APPLE, then in finals
DRESSEL – PIERONI… Read more »

Can’t believe they’re not considering Regan Smith. At least in the prelims!

She’ll prove them wrong at Nationals, don’t you worry!

Except he would never. He is way too kind and humble

i’ll see you at the top

Idk if any of y’all heard but J Schools went 49.33 in practice in a secret location off the coast of Singapore and is ready to unleash his speed unto the world. Be. Ready.

lol originally I had 52.9 but that seemed extreme… turns out I was right