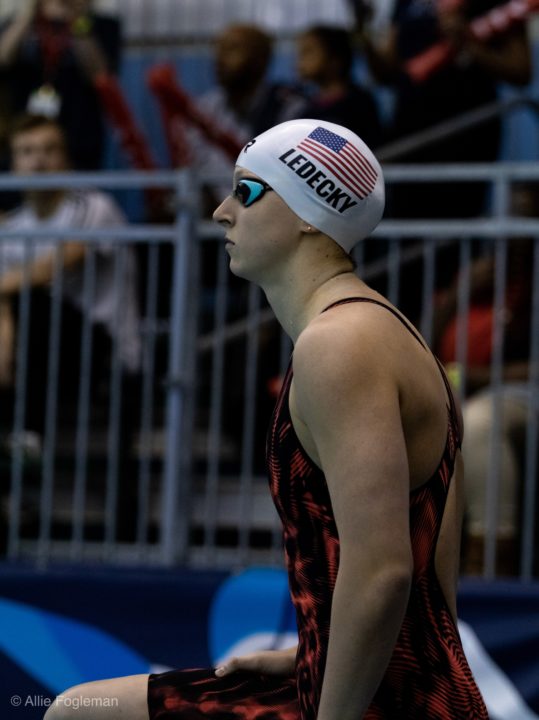 American world record-holder Katie Ledecky is 95% sure that she'll swim the 800 freestyle at Worlds after scratching both the 200 and 1500 frees. Archive photo via Allison Fogleman

American Katie Ledecky is 95% sure that she’ll swim the 800 freestyle at Worlds after scratching both the 200 and 1500 frees.

Maese reported that Ledecky said she’s 95 percent sure she’ll swim the event on Friday. Ledecky has been dealing with illness this week in Gwangju. She scratched out of the 1500 free final on Tuesday, where she was the heavy favorite, defending champ and world record-holder. She also bowed out of the 200 free heats that morning, citing illness.

Ledecky returned to action today on the 4×200 free relay, helping Team USA win silver and break the American record, though her 1:54.61 split was about eight tenths slower than what she went on that relay at Pan Pacs last summer.

She’s now saying she’s likely to compete in the 800 free, where she’ll remain the heavy favorite, even with her health in doubt. Ledecky is the fastest swimmer in history in the event by 9.4 seconds, and the next-closest active swimmer is almost ten seconds behind Ledecky’s lifetime-best. Last season, she had the world’s best time by 9.2 seconds.

Ledecky’s return comes at the right time for Team USA, which has generally struggled at this year’s World Championships. The Americans did surge to the medal table lead with a pair of gold medals today, but their dominance has fallen way short of what it typically has in Olympics or World Championships.

I was 99.9% sure Kawhi Leonard was staying with the Raptors…

Didn’t know you were a swim fan if you are the real Jalen Rose.