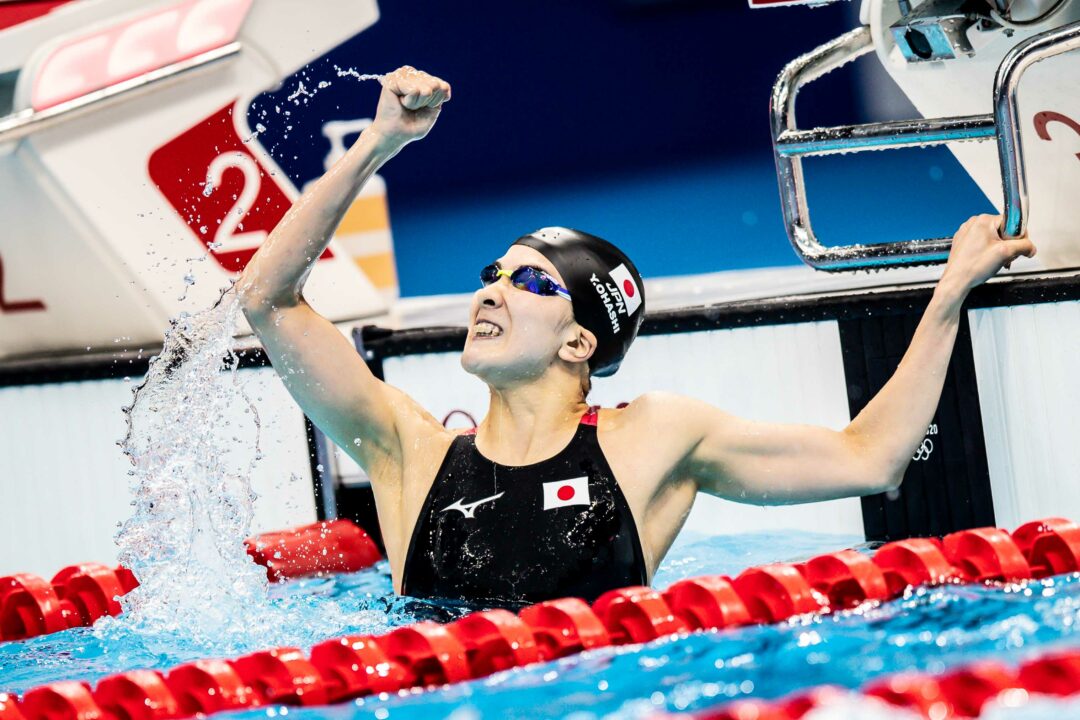 Yui Ohashi has become the latest woman to pull off a seemingly IM-specific feat by winning 2 Olympic gold medals in the same discipline. Current photo via Jack Spitser/Spitser Photography

In an era where elite swimmers seem to be specializing more and more, the ultimate anti-specialist discipline has been resilient to the trend. At every Olympics since the 1996 Games in Atlanta, the same woman who won the 200 IM won the 400 IM. That’s 7 straight Olympic occasions

The trend began with Irish swimmer Michelle Smith who collected gold in both IM events in 1996, defeating Canada’s Mariene Limpert in the 200 and the USA’s Allison Wagner in the 400. Since Smith’s double victory, the 200 IM/400 IM has seen the same gold medalist for 7 Games straight in the form of Yana Klochkova, Stepanie Rice, Ye Shiwen, Katinka Hosszu, and now Yui Ohashi.

After Michelle Smith won the events in 1996, Ukrainian swimmer Yana Klochkova brought the events into the 21st century, taking gold in both 2000 and 2004. Klochkova won a third Olympic medal at the 2000 Games in Sydney when she took silver in the women’s 800 freestyle. Her gold medal-winning swim in 2000 was a new world record at the time of 4:33.59 which stood until Katie Hoff hit a 4:32.89 in 2007. Klochkova remains one of the greatest swimmers in Ukrainian history and still holds both the 200 and 400 IM national records today.

As we see the victory trend play out in the IM events for the women, it seems as though Katinka Hosszu has now continued the trend that Rice and Shiwen demonstrated by returning to the Games after one’s victory but doing worse than they did at the prior Games. Hosszu swam both of the IMs at Tokyo 2020 but wound up 7th in the 200 IM (2:12.38) and 6th in the 400 IM (4:35.98).

As Hosszu faded, Yui Ohashi took control and became the 6th straight woman to win the 200 and 400 IM at an Olympic Games. Ohashi didn’t get down to world or Olympic record pace in her events but won her crowns nonetheless in a 2:08.52 and 4:32.08, respectively.

As previously mentioned, this double-victory trend in the IM events that we have observed over the past 7 Olympiads has not been seen in the other strokes. While there are certainly cases where the same woman wins 2 medals in the same stroke, it has happened with much less frequency over the past 25 years. In fact, we’ve only seen 9 women win 2 gold medals in the same stroke thus far at the last 7 Games:

There are another 3 opportunities for the feat to occur at the Tokyo 2020 Games. Should 100 backstroke victor Kaylee McKeon manage to get her hand on the wall first in the women’s 200 backstroke final, she will be the 3rd woman to win the double in our time frame, following Diana Mocanu in 2000 and Missy Franklin in 2012. Another chance for a double winner in Tokyo will come in the women’s sprint freestyles which have yet to take place. Emma McKeon and Cate Campbell of Australia seem to be the most likely candidates to take gold in both the 50 and 100 but considering the lethal fields in both events, it seems unlikely that one woman will make it to the top in both events. A third potential double medal winner is Katie Ledecky who took gold in the women’s 1500 freestyle and will have a shot to defend her 2012 and 2016 800 freestyle titles.

Interesting that aside from the winners only three other women have medalled in both I.Ms at the same games. I’d have thought there would be more.

Klochkova doesn’t get enough credit for how good she was. Broke world records, short and long course, Olympic silver medal the first time she entered the 800 free at a major international meet, World champion in the 400 free, won every title there is to win in an IM event, and then the cherry on an incredible career, won both IMs in two different Olympiads. Y’all say Katinka is the IM queen but it’s really Yana Klochkova.

This is a crazy streak, but I would guess it’s as much a cool fluke as anything else. Only 3 (out of a possible 14) of the minor medalists were repeats during this timeframe, and only one won the same medal in both races (Coventry’s silvers in 2008). Clearly there is a good amount of overlap between the two events, but the streak makes it look like more overlap than is really there.

Michelle smith was roided up though lol

Also interesting as a contrast to the dual champions, this Olympics the US Women had 2-3 in both IM’s, all 4 medalists were different swimmers.

It’s interesting that during this time it’s only been done twice on the men’s side when Phelps did it in 2004 and 2008.

I wonder if the women’s 200 IM and 400 IM are more similar than the men’s events are. The men’s 4 IM is 7% slower per 100 than the 2 IM, while the women’s is only 5.5% slower. Since the women’s 2 IM race takes longer, it’s more of a distance event than the men’s, making it easier for one person to be extremely good at both.

Yes only Phelps and Darnyi have achieved this double in the last 30 years on the mens side. Regarding why men don’t do this double as easily – I think it must be to do with strength, size etc as ACC suggests. The top 4IM guys are not always able to compete with the faster 2IM guys.