What Times From U.S. Nationals Would Have Made The Worlds Team? 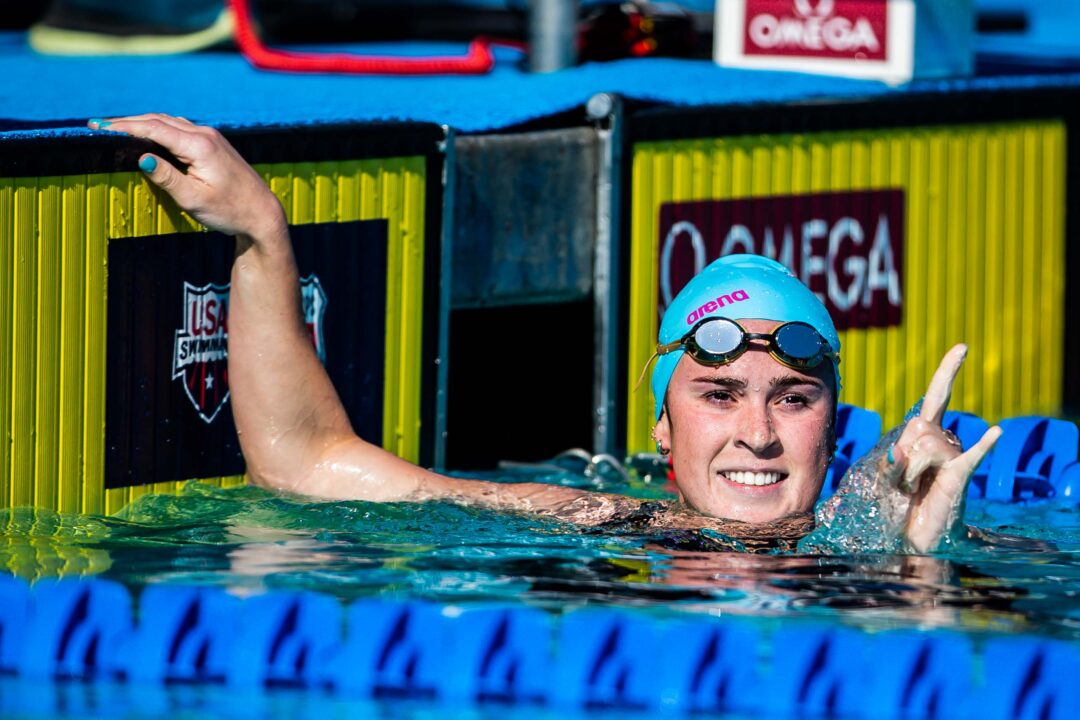 In this article, we review some of the swims from the first two days of US Nationals that were fast enough to earn a spot on the 2022 Worlds team. Current photo via Jack Spitser/Spitser Photography

Swimming is a sport predicated on time: both the time on the watch when a swimmer touches the wall, and the timing of a performance.

Swim coaches like to talk about ‘racing the clock.’ And while and that’s a useful mantra for developmental athletes, the timing of your best swims matters too at the elite levels of the sport. Going a best time in a final is more valuable than a semifinal, and doing so at the right meet can dramatically impact an athlete’s career trajectory.

Below is a review of those athletes’ swims from this week’s US National Championships so far that would have earned them roster spots at the World Championships if they had been done at April’s U.S. World Championship Trials. Coming on a quick turnaround from the NCAA season, and during finals for some swimmers (Matt Fallon), that meet presented a lot of challenges for a lot of athletes who either could not make the meet at all or ended up underperforming. The trials timing was forced by the original dates of the 2022 World Championships in Fukuoka, Japan, which were scheduled for late May before being postponed until 2023 and replaced by a June meet in Budapest.

In other cases (Natalie Hinds), the April timing of Trials provided no specific conflicts with other competitions, but this reminds us of the challenge of swimming, as in all sports, of performance, and not every race being perfect or peak to an athlete’s potential.

Considering that there are already a handful of athletes who could have qualified (or even medaled) at Worlds from just the first two days of U.S. Nationals, expect to see many more follow as the meet goes on.

After a stellar NCAA meet, Dakota Luther didn’t show up to U.S. trials. Instead, she made the move down to the University of Texas to train in her hometown. At a meet in May, she had already swam a time of 2:07.85, which was faster than Regan Smith’s 2:07.92 that finished second at trials. Then, at Nationals, Luther took another good chunk of time off her personal best and went 2:07.02. That not only would have made the Worlds team, but it also made her the 13th-fastest American woman of all time.

Natalie Hinds was already on the Worlds team by virtue of her fourth-place finish at U.S. trials, which gave her a spot on the 4×100 free relay. However, she barely saw any action at Worlds, only swimming in the heats of the women’s 4×100 free and medley relay. However, Hinds’ 55.53 time from Nationals was faster than Claire Curzan‘s 53.58 for second at trials, which would have garnered her an individual spot in the 100 free and given her more racing opportunities at Worlds.

In the case of Gretchen Walsh, her 53.86 would have been fifth at U.S. trials, beating out Kate Douglass‘s 53.99 and qualifying her for a spot on the 4×100 free relay. Walsh was significantly slower at trials compared to Nationals, putting up a 55.57 and failing to make it out of prelims. The biggest difference between now and then was the “no tech suit” rule implemented by Walsh’s coach, Todd DeSorbo. Following her performance at trials, DeSorbo didn’t allow Walsh to wear a tech suit until she hit a certain time, which resulted in her swimming faster than trials three times before she finally put on a suit during Nationals finals and went 53.86.

The only asterisk in the men’s 100 free is that both Shaine Casas and Matt King swam their fastest times at this meet during prelims. But regardless, Casas and King would have both been faster than Justin Ress‘s 48.38 to qualify for a spot on the men’s 4×100 free relay.

While Casas was at Worlds trials and made the team in the 200 back, he did not swim the 100 free. King, on the other hand, was not at trials at all.

Katie Ledecky won the 200 free at U.S. trials, but ended up dropping the event because it conflicted with the 1500 free at Worlds. And while she had a phenomenal Worlds that consisted of four gold medals, her 1:54.50 at Nationals would have given her a fifth, being faster than both Yang Junxuan‘s 1:54.92 to win 200 free gold and Summer McIntosh‘s 1:54.79 leadoff on the 4×200 free relay that was the fastest 200 free performance at the meet.

On the other hand, Erin Gemmell has been having a series of great 200 free performances this year, but just missed out at trials. She went 1:58.12 to finish seventh at trials, but had been 1:57-point on four different occasions this year. Then, in the finals at U.S. nationals, she dropped a 1:56.14 that would have both given her an individual spot on the Worlds team and taken bronze at the World Championships, being faster than Tang Muhan‘s 1:56.25.

The men’s 200 free contained a whopping five different swimmers who weren’t originally on the Worlds team, but would have qualified had they matched their Nationals times at U.S. trials.

Luke Hobson, Jake Magahey, and Grant House all went faster than Trenton Julian‘s 1:46.69 that took fourth place at trials. While Magahey wasn’t at trials, Hobson and House were. Hobson was seventh at trials in a time of 1:47.43, but his prelims time of 1:46.92 would have also given him a spot on the team. House didn’t qualify for the finals at that same meet, but swam a time of 1:46.91 in the B-finals that also could have made the team.

Then there’s Jake Mitchell and Jack Dahlgren, who both went faster than Trey Freeman‘s sixth place trials time of 1:46.93 by a slim margin. Dahlgren had just missed finals at trials, finishing ninth in prelims with a time of 1:47.60, while Mitchell missed the meet because he had been diagnosed with mono during NCAAs in March.

The biggest “could have, should have, would have” of this meet so far is Matt Fallon‘s 200 breast. At U.S. Olympic trials last year, Fallon went 2:08.91 in the semifinals as an 18-year-old, exciting the prospect that he could be America’s next talent in the 200 breast. He was a favorite to make the Worlds team this year, but ended up skipping trials because they conflicted with his final exams at Penn.

Then, at Nationals, Fallon ripped a 2:07.91 that would have won trials and also taken silver at World Championships, beating out the 2:08.38 time that actual silver medalists Erik Persson and Yu Hanaguruma put up. Considering that trials will be in late June next year, expect Fallon to make his international team berth for the first time then.

The American women can close with their best team in 2009 Rome They had three of the fourth lakes with Vollmer kukors and Schmitt! Only downfall that year Katie Hoff Did not make the Worlds team after splitting 154 in Beijing

I think this article would have more interest if the final time from nationals would have be put into the trials finals and the places were updated vs saying 4 people would have gotten 4th place at trials.

So, who is the #2 swimmer in women 200FR?
Claire Weinstein who represented US in individual race at WC or
Bella Sims who swam 1:54.6 in 800 relay at WC or
Erin Gemmell who get #2 season ranking at Nationals.
Quite a conundrum 😀
The greatest thing is that no matter how you rank them they all three are very young and all of them are on the rise making a huge improvement this season.

The last ‘golden generation’ of the US 200 free never really came together the way that it could have.

I wonder if this group can do so before Ledecky falls from her prime.

A prime Schmitt, Franklin, Ledecky relay would leave a world record that would be neigh untouchable. Add any 4th swimmer and we’re looking at 7:36, 7:37…

The current world record belongs to the team where one swimmer only swam under 1:55.

The Aussie team is currently theoretically able to swim a 7:36 mid with Titmus, McKeon, MOC and Wilson (assuming -1.5 seconds off flat time for 3 relay starts).

Yes I would like to see Titmus, McKeon & MOC’s best times at end of career to see if they can match this Yozhik’s team, currently US ahead by about .43 a second with MOC especially possible big improvements.

I think this group of Golden swimmers will be at their peak come Paris, With Weinstein being the youngest and she has Continue to drop times, Gemmell It’s the closest swimmer under 156 flat we’ve had since Simone Manuel flat start that is, And Bella Sims monstrous anchor Where she actually went faster than Ledecky at the 50 and 100 , Altogether they could form a very dangerous team I think they will be the first team under 740

Last edited 21 days ago by Swimfan
0
0
Reply
will