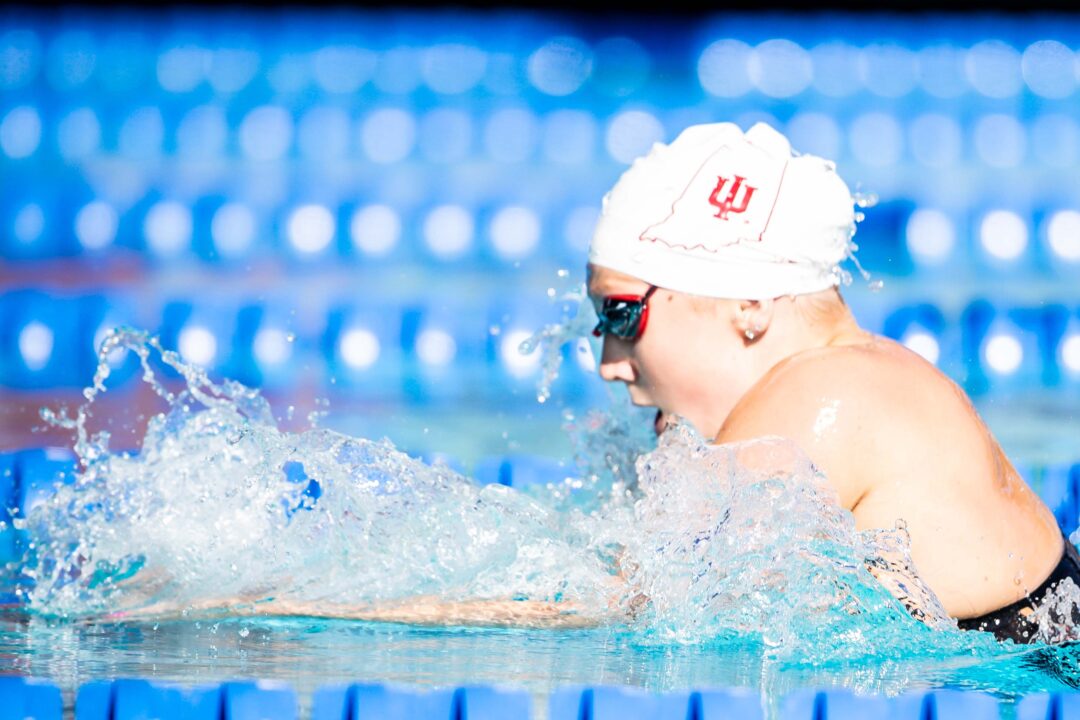 Indiana Swim Club and California Aquatics were named the winners of the team awards at the 2022 US National Championships.  Archive photo via Jack Spitser/Spitser Photography

In route to winning the women’s team title, Indiana Swim Club, under head coach Ray Looze, scored a total of 163 points. Combined with the total from the 2nd place men’s team, Indiana scored 283.5 points overall to claim the overall title. Indiana saw large contributions from Mariah Denigan, Mackenzie Looze, Josh Matheny, and Zach Apple. Both Looze and Matheny saw breakout performances in the breaststroke events, with Looze winning the women’s 200 breaststroke (2:25.35) and Matheny winning the men’s 100 breaststroke (59.44). Looze also placed in the A-final of the women’s 100 breast, while Matheny placed in the A-final of the 200 breast. Apple contributed a victory in the men’s 100 freestyle, tying Matt King for first with a time of 48.44. Denigan, who scored the most points on the entire team with 58, finished 2nd in both the 800 freestyle (8:31.12) and the 1500 freestyle (16:12.44). Denigan also scored in the top 8 of the 400 IM and the 400 freestyle, having a very successful meet.

The California Aquatics men scored a total of 176.5 points, led by Gabriel Jett, who had a breakout meet. Jett won the 200 butterfly in a time of 1:54.37, claimed 3rd place in the 100 butterfly with a 52.19, and finished 9th in the 200 freestyle with a 1:47.44. All of his performances marked best times as the Cal rising sophomore looks to progress into his second NCAA season.

Notably, both California Aquatics and Indiana Swim Club serve as the affiliate clubs for their colleges. A majority of the swimmers on their rosters also represent them at the collegiate level or are alumni of the NCAA team. However, there are several notable athletes who still elect to represent their childhood teams instead, having an impact on the scoring of the meet. For example, Gretchen Walsh represented Nashville Aquatic Club instead of Cavalier Aquatics at Nationals. Walsh’s 68 individual points, which led the entire field in scoring, would have brought Cavalier Aquatics into 3rd place in the overall scoring and first place in the women’s team scoring.