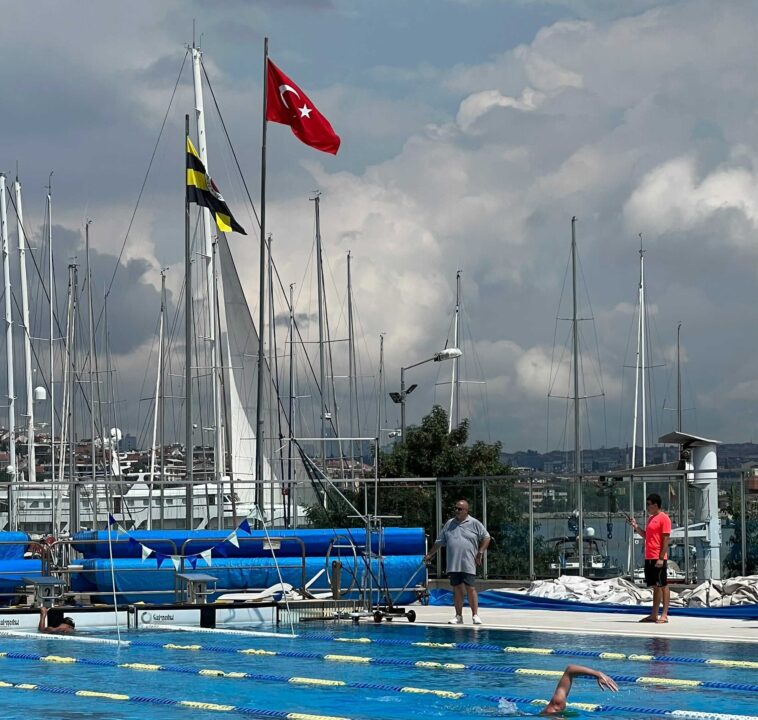 Stefano Nurra in June 2022 working on deck with swimmers in Turkey. Nurra died after a brief battle with Leukemia.

Editor’s note, Braden Keith: Stefano Nurra, in addition to his work as a technical analyst in swimming, was a brilliant contributor to our site – one of my favorites. He examined the sport in a different way and one not often seen by the public. He had a knack for finding the important information in a mountain of data, and making the world excited about the seemingly-mundane. Our condolences go out to his family, including his Alev and his son Gianluca.

Nurra was diagnosed with Leukemia last week, and succumbed to the disease after a brief battle.

A native of the island of Sardinia, Nurra worked with swimmers around the world as a biomechanist. His most recent appointments include as a technical expert with the Turkish Swimming Federation and contributed to that country breaking dozens of National Records in the last two years.

He also worked with star athletes individually, including Italian Record holder and 2022 World Champion in the 100 breaststroke Benedetta Pilato.

Nurra was one of a handful of such technical experts globally in swimming, and was the most open about sharing his work. Nurra analyzed dozens of the greatest swims in history and shared that work with SwimSwam in multiple languages. This shed a new light on the world’s top swimmers and told the world about what separates the ‘greats’ from the ‘very very goods’ in the world of swimming.

Nurra also created the SwimLab brand and built a community of technical swimming analysts around the world to grow the field and share insights.

SwimSwam Italia editor Giusy Cisale was a personal friend of Nurra, in addition to a professional colleague. She had this to say about Nurra:

WE LOSE A FRIEND.

A person who was present in all forms where a true friend can be present.

Stefano was the true passion for this sport, but also a brother on the pooldeck, a shoulder ready to welcome you and a person who knew how to listen.

He has that goodness and wealth of soul that you don’t think can exist, until you meet him, with his Mario Brothers t-shirts and that smile that changed your day.

We were lucky to have met you. You have enriched us as professionals and as people.

“Stefano was the most good, honest and humble person that the swimming environment had. Those who have known him know that he will no longer find a person of such high human value.” (Massimo Meloni).

From today we will all feel more alone.

The warmest condolences of all SwimSwam staff reach his wife Alev, his son Gianluca, his family and friends.

This is more than a loss for swimming; it’s a loss for all mankind. God rest his soul.

So sad. Too young.

That’s a real bummer. He had great analysis.

Really sad to hear this. I also enjoyed his posts.

Condolences to his family and friends. I really really enjoyed his articles. A great loss

A sad day for the sport