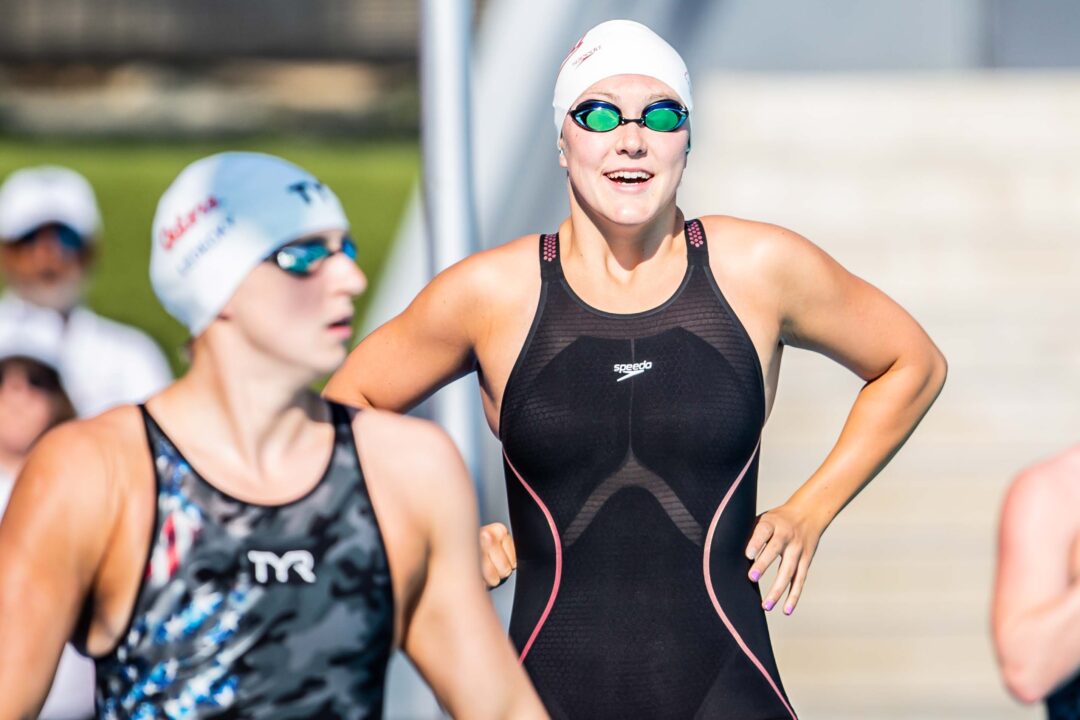 Rising sophomore at Indiana Mariah Denigan had a huge meet, finishing second in both the 800 and 1500 freestyles at US Nationals. Current photo via Jack Spitser/Spitser Photography

What Does Josh Matheny’s Long Course Breakthrough Mean for US Breaststroking?

19-year old Josh Matheny became one of just three Americans who have ever broken 1 minute in the 100 breaststroke as a teenager at last week’s US Nationals.

US Nationals concluded on Saturday and they did not disappoint. Here we at SwimSwam have gathered our thoughts and put together a few of the best storylines of the meet on the women’s side. Please note: These are not all of the highlights and storylines of the meet but instead represent some of the top storylines and are in no particular order.

Mariah Denigan has been well-known especially after qualifying for the 2018 Jr Pan Pac Team at the age of 15 as well as the 2019 Pan Am Team. She has been somewhat quiet since Pan Ams in Summer 2019 as she did not qualify for a final at Wave II Trials last summer, one of very few big long course meter meets in the US since COVID, but definitely made a statement here.

Although she was slightly off her best time of 8:28.15 which she swam at 2018 Summer Nationals, Denigan swam a 8:31.12 in the 800 free here. That was her fastest time since 2018 Junior Pan Pacs. In addition, her 800 free here was swam during the afternoon session meaning she did not compete in the evening with the top eight seeded swimmers.

Denigan also swam the fastest American time in the women’s 1500 as she finished second only behind Australia’s Maddy Gough. Denigan’s time of 16:12.44 sits at #3 in the US this year, only behind Katie Ledecky and Katie Grimes both of which represented the US in the event at 2022 Worlds.

She will be entering her sophomore year this fall at Indiana University. She went best times in the 1000 and 1650 frees in her freshman season but was unable to score at NCAAs. With her showing here at Nationals, she may be primed for a huge sophomore season at IU as well as potentially contend to make another US International Team in the pool next summer (she competed for the US in the open water events at 2022 Worlds).

After swimming a 25.82 in a borrowed kneeskin back in May of this year to qualify for Nationals, Kaitlyn Johnson competed in the 50 free here swimming a 25.42 in finals. Johnson finished 13th overall.

The 33 year old was the oldest of the field in the final of the 50 free by three years, and she also was the oldest American by eight years. In addition, Johnson competed next to Erika Pelaez in finals, who is half her age as Pelaez is only 16 years old.

Johnson competed collegiately for Division II Clarion University. She now trains CrossFit five days a week and only swims once a week as “recovery”.

Johnson’s swim at Nationals places her tied at #28 for US women this year. In addition, it also was faster than the 2024 US Olympic Trials qualifying time of 25.69 although that qualifying period does not begin until this winter. Johnson has already told SwimSwam she plans to attend Winter Nationals in hopes of obtaining her cut there.

After entering the transfer portal in June, Stadden decided a few weeks ago that she would be staying at Cal. Stadden had solid swims at Nationals including winning the national title in the 200 back swimming a 2:07.29.

Stadden’s time in the 200 back was only 0.01 seconds off her best time of 2:07.28 which she swam back in May 2021. Notably, her time here was faster than she was at both Wave II Olympic Trials last summer as well as International Team Trials this April.. Stadden also finished third in the 100 back, swimming a 59.55 in finals. Her best time stands at a 58.99 from Wave II Olympic Trials.

Stadden swam her first two years at Cal and after abuse allegations became public about head coach Teri McKeever, and McKeever’s subsequent leave of absence, Stadden was one of many Cal swimmers to place her name into the transfer portal. Stadden has since decided to return, but at least six other Cal swimmers remain in the portal.

Auburn Shines as a Team

One NCAA team that stood out to SwimSwam throughout most of the meet was Auburn. Leading the way was rising junior Hannah Ownbey.

Ownbey did not compete at US International Team Trials in April, but her time in the 200 IM here would have finished fifth and her 400 IM would have been sixth. Ownbey was one of 10 Auburn women to compete at 2022 NCAAs.

Teenagers Erin Gemmell, Claire Tuggle, and Cavan Gormsen finished 2-3-4 respectively in the women’s 200 free at the meet. Notably, Gemmell swam a best time of 1:56.14, a time that would have finished second at US International Team Trials and also would have qualified to compete for the US individually at 2022 Worlds.

The US women’s 4×200 free relay already consisted of two teenagers at 2022 Worlds with Claire Weinstein (15) and Bella Sims (17). The big question is, could the next relay at Worlds for the US have three (or maybe even four) teens on it? Both Gormsen and Gemmell are currently 17 whereas Tuggle is 18.

Hell would have to freeze over before Katie Ledecky is ousted from the women’s 4 x 200 meter freestyle relay.

Not so sure those five would be my picks as top storylines! #5 for sure but other 4?????