What Does Josh Matheny’s Long Course Breakthrough Mean for US Breaststroking? 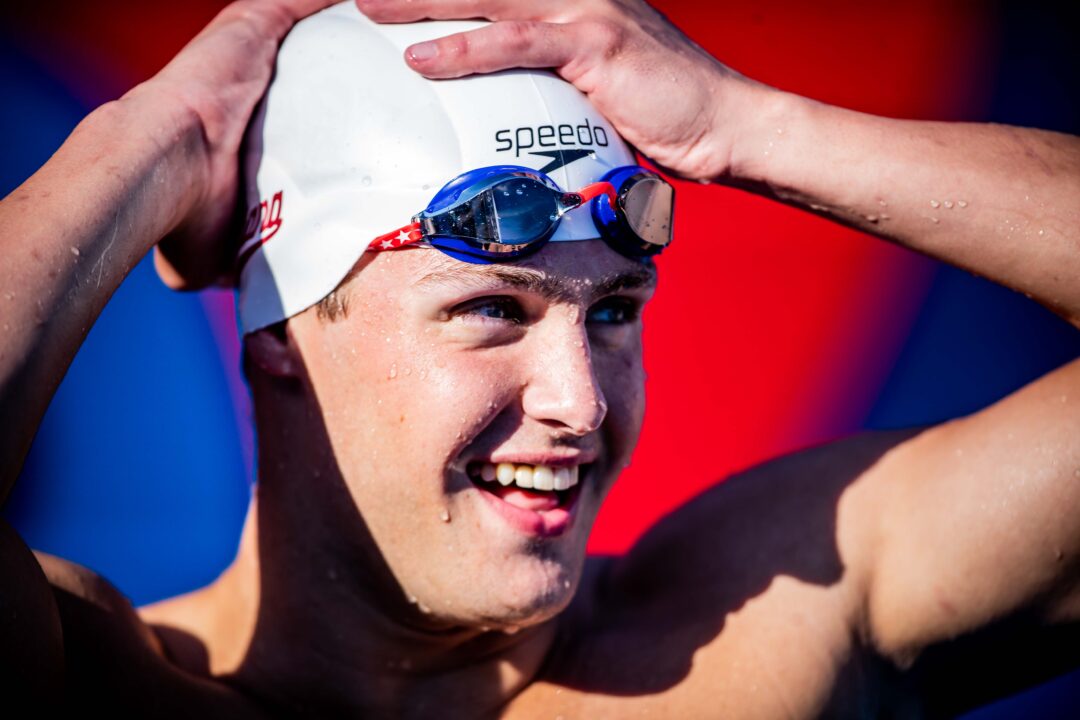 19-year old Josh Matheny became one of just three Americans who have ever broken 1 minute in the 100 breaststroke as a teenager at last week's US Nationals. Archive photo via Jack Spitser/Spitser Photography

Josh Matheny is one of the best junior breaststrokers that the United States has ever developed, and last week in Irvine, he formally inserted himself into the conversation to take over the competitive slot for America’s top breaststroker.

Matheny won the US National title, the first of his career, in a time of 59.44. That moves him up to 11th-place in the all-time American rankings, 11th in the 2021-2022 World Rankings, and 3rd among Americans this season.

He’s still well behind the two incumbents in the event. 29-year old Nic Fink has experienced a late-career renaissance that led to a bronze medal at the World Championships earlier this year.

For most of his pro career, training full time at Georgia, Fink languished around the 1-minute barrier. He was a 59.40 in 2017, but was stuck there for years.

Coming out of the pandemic, he moved to Atlanta, began a master’s degree in engineering at Georgia Tech, and pulled back a bit on his training, and the results have been electric. At this year’s Trials, he lowered his best time all the way to 58.37, and eventually earned his spot on the American medley relays (both mixed and men’s) at the World Championships.

The other front-runner is 23-year old Michael Andrew, who holds the American record in the 100 breaststroke. Andrew got the nod at the Olympics in 2021, where the US men’s medley relay won a gold medal and set a World Record.

Andrew and Matheny are two of only three American* swimmers to break a minute as teenagers. Andrew’s best before his 20th birthday was a 59.38 from 2018.

Editor’s note: American by sporting citizenship. Caspar Corbeau, who was born in the US, was 59.56 as a teenager, but he represents the Netherlands internationally.

The 19-year old Matheny, meanwhile, came to Indiana last fall already with a best time of 1:00.22, making him one of the fastest junior swimmers in US history in the event. Indiana has been the most successful breaststroke program, holistically, in the US in the last 7 or 8 years, and so far that seems to be paying off. He wasn’t spectacular in his first semester at Indiana, coming up four-tenths short of his best time at the team’s mid-season taper meet.

But patience played out at the Big Ten Championships, where a 51.65 placed him 3rd, and lowered his best from high school by two-tenths of a second.

At the Phillips 66 International Team Trials in April, he again missed his best time in long course, but he wasn’t alone in that among those coming on a quick turnaround from the college season.

Now in Irvine, with a chance for another strong block of training, he’s reaching toward his potential.

While he has at least a second to go to catch up to Andrew and Fink, he’s of the right age, and the right trendline, to close that gap just in time for the 2024 Olympic Trials.

Fink’s resurgence has been fun to watch and has made for a great story, but he will be 31 by the time Paris rolls around. While not impossible, history says that any further improvements in his time would be marginal, if at all.

Andrew, meanwhile, has had some issues with consistency, and simultaneously has so much ability in so many events, that by the time Paris rolls around, he might not even be swimming the 100 breaststroke (though besides the 50 free, right now it looks like his safest bet for the Paris Games).

But among his consistency issues, he has still done well at Trials meets. Observationally, we can also see some shifts in his training, and with more time to settle into those changes, there’s reason to hope that he might perfect the pattern.

All this to say that if Matheny’s progression continues, he’s in the mix. There’s a lot of reasons for him to feel confident in that too.

The men’s breaststroke spot is a really good one for the Olympic Games. Besides a slot on the world’s best men’s medley relay, it also gets a spot on the mixed medley – as the US learned in Tokyo, the one leg that should almost always be male is breaststroke.

The US men’s breaststroke battle, with Andrew, Fink, and the now-retired Andrew Wilson, was a really fun one at the 2021 US Olympic Trials. It looks like we’re setting up for more fun in 2024.

US Men’s Active 100m Breaststroke Rankings, With Current Age and Year of PB

Note: only includes swimmers who have raced since the 2021 Olympics, and who have not announced their retirement

By 2024 I have a feeling fink may shift towards more of a 100 focus and like the article said, won’t see much more improvements. My predictions for the breaststrokes will be Andrew and Fink in the 100, Fallon and Foster in the 200.

Yeah Jake. The 200 breast seems to be pretty weak right now with no clear #2 behind Fallon. I could see any of fink/licon/foster/Swanson/pouch/matheny getting the spot but fink, licon, and Swanson seem to be on the older side of things and foster has recently been 2:09 low and shows no sign of slowing down.

I wouldn’t discount Licon in the 200. Yes he’s getting older, but he has been close so many times and all it will take is one good swim at the right time. He has shown he has 2:07 ability and the fact he’s still swimming right now tells us he has his eye on 2024

Licon has gone 2:07 once for his PB in 2019. Has only been 2:08 once since then at Olympic Trials last year. This year was about as good of a chance to make an international team as he would ever have, and he was 2:11 at world team trials. I hope he gets back to top form, but I wouldn’t bet on it.