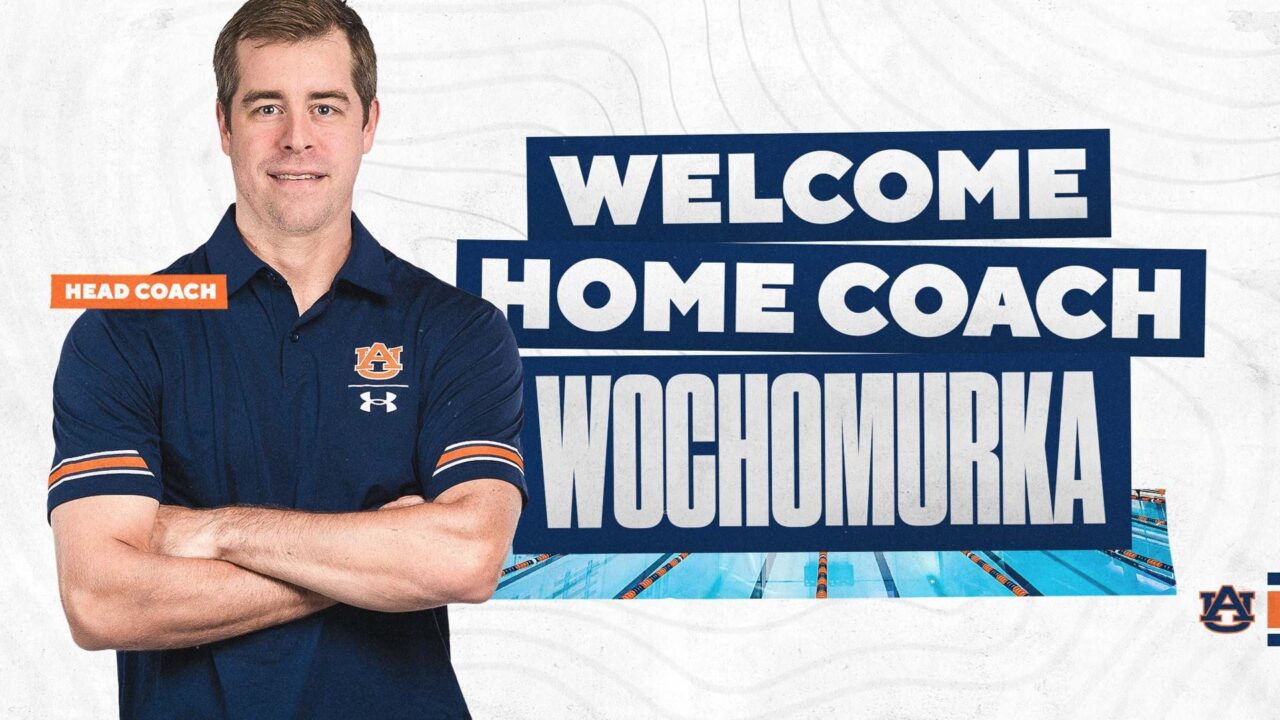 He will replace Gary Taylor, who in conjunction with Auburn “mutually parted ways” last week after neither the men’s or women’s teams scored at the NCAA Championship meet.

Wochomurka is an Auburn alumnus who represented the school during its heyday in the mid-2000s. As an athlete, Wochomurka helped Auburn win three NCAA team titles in 2003, 2004, and 2005. He broke into coaching with a fast-rising Louisville program, rising to Associate Head Coach and Men’s Recruiting Coordinator.

He’s been with the University of Houston since 2015 – in fact, his hiring at Auburn comes on the exact day (April 23) that he was hired in Houston six years ago. When he took over, the Houston women were coming off of a 6th-place finish in their first season in the AAC. Houston was 6th again in Wochomurka’s first year, then rose to 3rd in 2016 and won the next five conference titles.

Auburn is the fourth SEC program with a coaching change this offseason. Coley Stickels resigned at Alabama midway through the season, with Ozzie Quevedo finishing out the season and Margo Geer taking over next season. South Carolina moved on from McGee Moody in a mutual agreement, hiring away Florida women’s head coach Jeff Poppell to fill the spot. That caused Florida to re-combine its men’s and women’s programs under men’s head coach Anthony Nesty.

Ryan we are excited to see the new culture and staff you bring to Auburn! Just some belief in the athletes and knowing what makes them “kick”, will create winning attitudes and lead to overall success.

Congrats! Hope to see Auburn success in the future.

Who is downvoting all of these?

Was Rowdy the runner-up?

Not entirely sure this is the best long-term move for him. The way UH has invested in sports facilities (largest collegiate natatorium in the U.S., new basketball arena – premiere coaches in track, basketball, football) and Tilman Fertita’s philanthropy/leverage has it on a major ascent. Huge region to recruit from with now no Eddie to contend with. Auburn, OTH, has a nice, but very outdated natatorium, an idiot for an AD, and glory years from a different era. The “Auburn culture” the alums are touting has zero resonance with 18 year olds today.

I’m not sure what standard you’re using for “largest collegiate natatorium in the US,” but I can’t think of an obvious measure where that’s true.

Maybe he meant new student rec center that natatorium is part of. UH is impressive to visit and the President is very much into investing in athletics.

I was pushing our daughter so go to UH, that is why we visited, which would have been free for her, but she wanted to be a Longhorn and that was not subject to negotiations. She just graduated and I am $100K+ short. 🙂

A “natatorium” is a building containing a swimming pool. What’s labeled as the IUPUI “natatorium” includes in its SFage the  IUPUI School Health and Human Science and the Polaris Fitness Center. The UH rec center housing the 70 meter x 25 yard pool — hence, the natatorium — is 264K SF. IUPUI’s is 224K SF.  Care to name a larger one?

So the 264k number means you’re including the entire student Rec Center attached to it. In that case, there are MANY bigger. A&M, two hours away, has its pool in the same building as its rec center, which gets you to about 400k square feet.

I think most people would stop counting natatorium square footage when you get off the pool deck and connected coaches offices and locker rooms.

Fine. My point lost in your nitpicking is that the Auburn facilities are a comparative dump. And it’s “natatoriuM.” Don’t go ALL CAPS me.

While I agree Greene’s choices at the start weren’t great, he’s been making a lot of positive moves to revitalize Auburn sports. I graduated three years ago, and every time I go back the campus has been updated in some way, so not sure what you mean by “outdated”. They’ve done a lot of updating to the pool as of recently.

The pool facility basically hasn’t been upgraded since the 90’s. Sure, they added a scoreboard, redid the record boards, but it has a 90’s feel to it. Fast pool, but locker rooms, seating capacity, etc. are not what you’d expect from an SEC powerhouse. They haven’t had a major meet there since about 2005.

They have hosted the SEC meet every 4-5 years but have chosen to not bid for the NCAA meets since they last hosted those meets. Based upon some of the facilities that have hosted NCAAs, they likely would have gotten another meet as their facility is comparable to some but not all of the other host sites. Auburns recent lack of success is not due to facility issues.

They had SECs in 2020. The pools, dorms, athletic dining, and academic center are top notch and so convenient for the athletes. Locker rooms were just redone last year, the pool is older but still nice and nothing like the outdoor pool with the sunrise.

At UH he wasn’t recruiting against Eddie. He coached a women’s only program, so that would have been against Carol.

And how long do you think before they have a men’s team? Like zero seconds.

This is a GREAT HIRE!!!! Congratulations Ryan!

Ryan,
Thank you want you did for our Coogs! Thank you for being a great gentleman and coach. May your path be challenging and worthy to follow the swimming traditions of Auburn. Your promotion has always been expected so we are excited from you and your family. I will have to cheer the Gators, of course, but Auburn will be our family’s second favorite SEC team now!
Jim Power