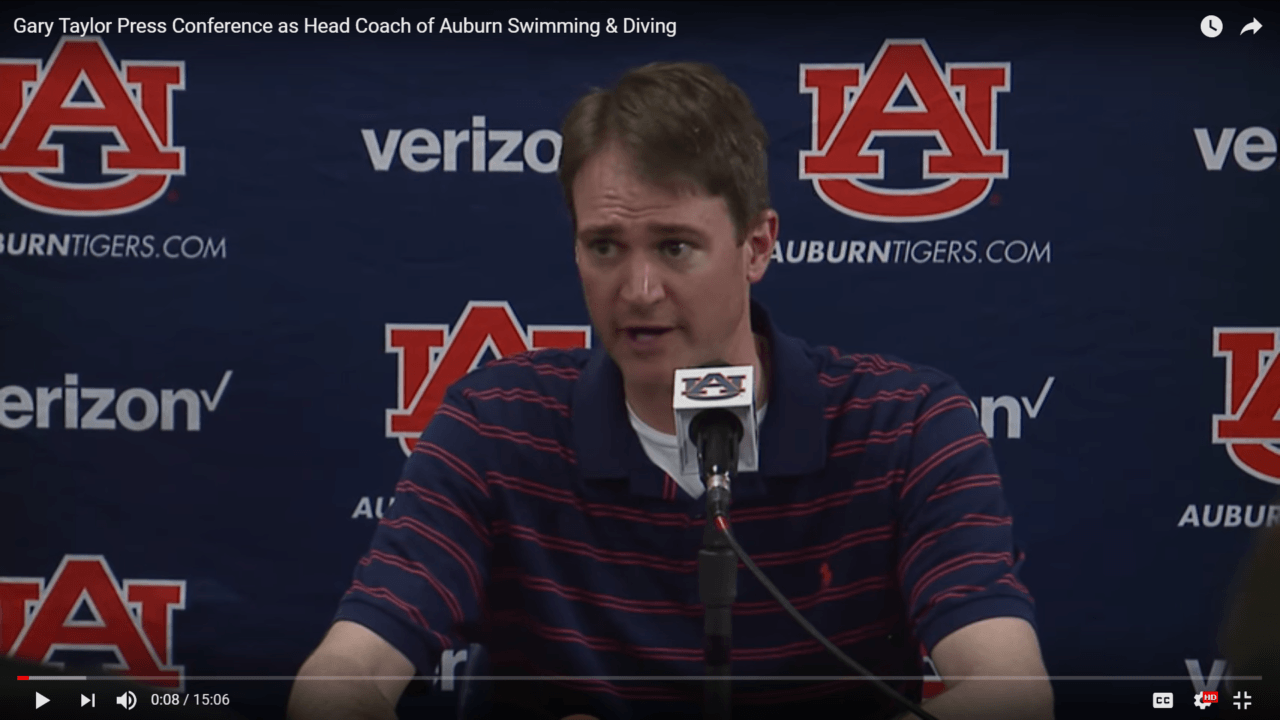 Auburn will move on from head swimming coach Gary Taylor after just three seasons, the school announced in a statement today. Archive photo via Auburn Athletics

“Auburn and head swimming and diving coach Gary Taylor have mutually agreed to part ways,” Athletic Director Allen Greene said in the release, which you can read in full below:

“Auburn is appreciative to Gary for his service to the Auburn swimming and diving program,” Greene said.  “We wish him the very best in his future endeavors.”

A national search for his replacement will begin immediately.

Auburn will become the fourth SEC program with a coaching change this offseason. Coley Stickels resigned at Alabama midway through the season, with Ozzie Quevedo finishing out the season and Margo Geer taking over next season. South Carolina moved on from McGee Moody in a mutual agreement, hiring away Florida women’s head coach Jeff Poppell to fill the spot. That caused Florida to re-combine its men’s and women’s programs under men’s head coach Anthony Nesty.

If AU is looking for a replacement that does not create a toxic team environment and retains swimmers then I highly recommend they bypass the #1 choice on this list. Research how many swimmers have left Ryan Wochomurka’s UH team in the past 4 years before considering him.

Peter Verhoef……. Mentored by Marsh in Charlotte, experience at Bolles, great coach! Not sure if UGA alum would appreciate it though….

As a college swimmer at another team whose sibling is on the current Auburn team, what disappoints me most about this comment session is how many people are simply casting aside any humanity. College athletes are tough, hard-working, and called to a high standard, but ultimately at the end of the day we are humans, college students, people just trying to figure out life, grow through our college years, and find happiness in them. What matters most about this situation is respecting that – acknowledging and considering the personal and emotional difficulties those swimmers have faced. To have people commenting that the hardship and pain they felt is “just part of college athletics” or a result of “not wanting to… Read more »

Any Seniors that have made it through the past four years at Auburn get a 4.0 in the Resiliency and Pain Tolerance classes. Too bad they can’t get a do over.

well, technically they do get to do one year over next season if it works out for them with the extra year of eligibility…

2
0
Reply
too bad
Reply to  Curious

too bad Gary said he wanted the senior class out

What does your statement mean? Please elaborate.

Kirk Hampleman, get him in there yes sir reee

His crew at Iowa did really well. Not the most charismatic recruiter, but he does a great job on deck. Great person, too. Probably not a big enough name, and has been out of the NCAA game for a few years (understandably so).

As someone who swam for Gary saying his words were brutal is a total understatement. More times than I can count he had swimmers leave goal meetings crying because he would use words like “ not talented” “terrible” and tell some members on the team to straight up lose weight or call them the “get fit crew”. On multiple occasions he tried forcing on me that I had a mental health issue and that “ he could say things to me that would make me very upset”. What kind of person or coach talks to another person like that especially when he doesn’t take any time to get to know his athletes… at all. On another occasion he ventured into… Read more »

I know plenty of programs where this is not the case, nor should it be. You can motivate swimmers and get great success without tearing them down. I’m all for some tough love, but no degrade swimmers on a regular basis. It’s clearly not effective, because Auburn did not get results.

That should say “but not degrading swimmers on a regular basis.” #teamtypo

…college athletics in the 70s

Sounds just like Kipp at USC! He will be gone soon for his abuse towards athletes!

Needed more time? BS… look at UVA, they built a NCAA championship program in the same time as Gary has been at auburn…. Sergio Lopez too at Tech, and so many other schools. All rebuilt or are building faster and more successfully with less to sell (in terms of legacy and facilities).

There’s a lot more to sell at UVA than just legacy & facilities. The academic environment is outstanding.

Bottom feeder teams in the Big10 had the same coaches for 20 years. There are plenty of others, too. A lot of departments really don’t care about the swim program. MN is the new Iowa/Mich State. At least Northwestern seems to have rebounded. Wisconsin is improving and investing. Purdue-they’ve been stagnant on the whole. Penn State looks bright. Big 3 will remain for quite a while.

The article says they mutually agreed to part ways. How do we know the decisions he had to make weren’t coming from someone above him? What if he couldn’t run the program the way he wanted to and had to clean up problems from the previous staff?

What we don’t know is how well the school did or did not support Gary in his 3 years there. The schools gotta support an environment for the coach to grow too, much like the athletes.

According to the team meeting today, it was NOT a mutual decision. He was allowed to resign. The AD supported him over the athletes until now. Another top team member entered the portal last week, which was probably the nail in Gary’s coffin.