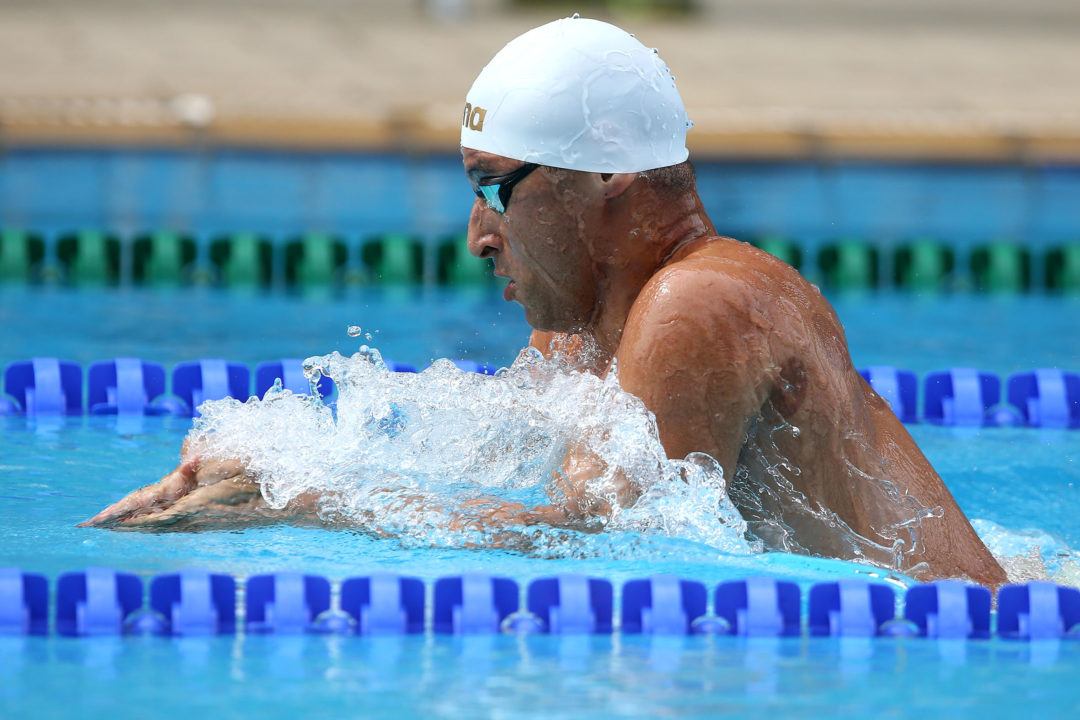 36-year old Felipe Lima has qualified to swim at his 3rd Olympic Games after hitting the FINA "A" standard in the 100 breaststroke on Monday. Archive photo via Satiro Sodre/SS Press

Night 1 of the 2021 Brazilian Olympic Trials has wrapped up and we now know the first two members of the country’s Tokyo 2020 Olympic squad: Guilherme Costa and Felipe Lima.

Costa became the session’s first qualifier for the Games in the men’s 400 freestyle final when he posted a 3:45.85 to win the heat. Not only was that swim under the required FINA A standard in the event of 3:46.78, but it was also faster than Costa’s Brazilian and South American record in the event.

With the swim, Costa became the first South American man to swim under 3:46 in the event, became the first official addition to Brazil’s Olympic roster, and became the 7th fastest man in the world in the 400 freestyle this season.

Just two events later, Costa was joined on the Olympic roster by 36-year old Felipe Lima who earned a spot on the team by swimming a 59.43 100 breaststroke. That swim cleared the selection standard of 59.93, meaning that he became the second official roster member.

After finishing 3rd at the 2008 Brazilian Olympic Trials to miss the team, Lima represented Brazil at both the 2012 and 2016 Games.

Along with Lima’s qualification, the other storyline of the men’s 100 breast was that no other swimmer managed to clear the consideration cut. It was certainly within the realm of possibility for more than two men to have hit the required 59.93 but all of them fell short.

2016 Olympic finalist in the event João Luiz Gomes Júnior was the closest as he hit a 1:00.15 for second place and Caio Pumputis wasn’t too far off either with a 1:00.25. Pedro Cardona was a little further off but still within range with a 1:00.37 for fourth place and Gomes’ co-Olympic finalist back in 2016 Felipe Silva trailed with a 1:01.01 for fifth place.

The most disappointing ‘miss’ of the day was Brandonn Almeida missing the cut in the 400 IM. He swam a 4:14.54 in December, which would have been fast enough to hit the cut if repeated, but was just 4:16.49 in Monday’s final.

In his post-race interview, he said he “doesn’t know what happened” after closing in a 1:00.24, which is slower than his usual rested closing splits of 56-mid.

With one day of racing out of the way, athletes will have another 5 days to make their case for a spot on the team. Racing will start up again on Tuesday morning with prelims at 9:30 am local time (8:30 am EDT).

Anyone else have the weird feeling that Brazil is going to drop out of the Olympics this summer due to COVID concerns? I can’t put my finger on it but I have this funny feeling in the back of my mind. I’m usually right about these things.

I don’t think that will happen. All the athletes have been tested consistently.
We do have a president who is a genocide though.

“I’m usually right about these things” Are you sure enough to bet on eating a pair of goggles?

Since its a big bet, Coach Rob should eat a Tech Suit.

I don’ think *they* will pull out. Brazil hasn’t cared about covid so far, it’ll continue to ignore the consequences of it.
Japan might not let them in of course.
But I’m sure they’ll give Olympic athletes priority access to the vaccine and it’ll be fine.