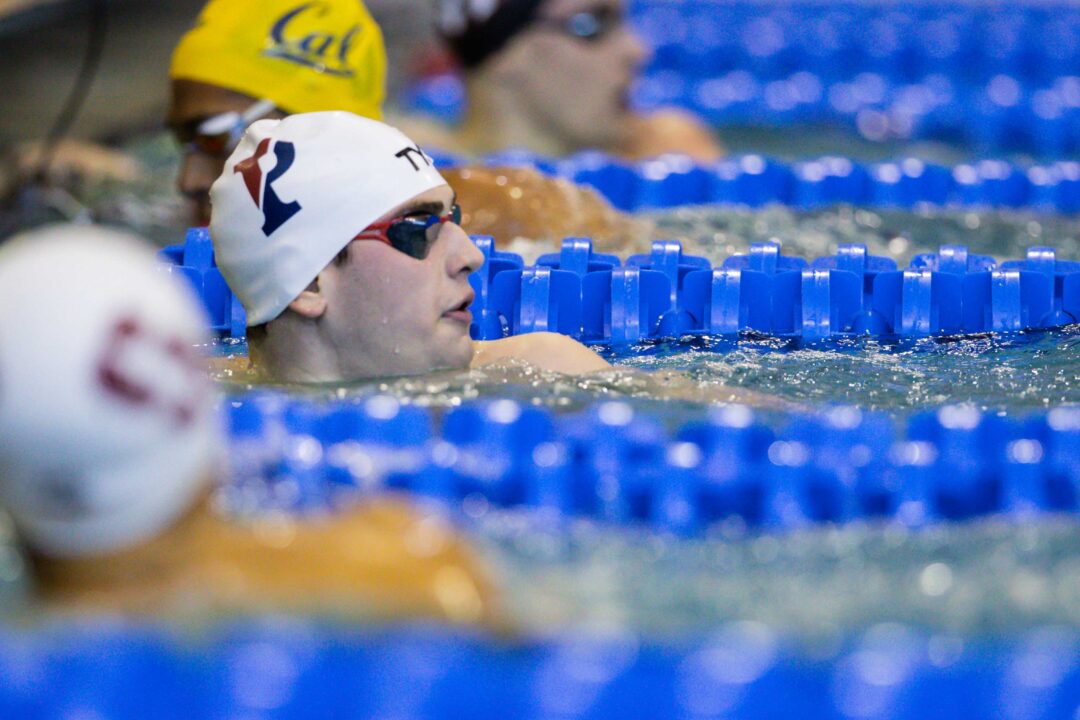 Penn freshman and US National Teamer Matt Fallon will be skipping the USA's Trials next week due to a conflict with final exams. Current photo via Jack Spitser/Spitser Photography

Just a week out of the USA Swimming International Team Trials in Greensboro, one of the nation’s top breaststrokers has revealed that he will not be competing at next week’s meet, according to his coach.

Matt Fallon, a member of the USA Swimming National Team and freshman at the University of Pennsylvania, will not compete next week due to a conflict with Penn’s final exam schedule. Fallon studies at Penn’s esteemed Wharton School, widely regarded as one of the top business schools in the world.

Penn’s final day of classes is next Wednesday, April 27th, the second day of the meet and the day of the 200 breast, Fallon’s best event. The school then lists the 28th and 29th as “Reading Days,” with final exams officially beginning on Monday May 2nd. It is not uncommon for Wharton classes to hold their final exams during the final week of classes as opposed to during the official final exam period, though it is not known if this is a specific issue for Fallon.

Fallon broke onto the national scene last summer at Wave II Olympic Trials, where the-then 18-year-old qualified as the top seed out of the semi-finals of the 200 breast with a 2:08.91. While he faded to 8th in the final and did not qualify for the US Olympic team, Fallon was the fourth-fastest American and the fastest 18 and under swimmer in the world in 2021.

Fallon’s decision to skip the trials highlights an issue with USA Swimming’s qualifying meet scheduling. The United States relies on collegiate athletes and coaches to fill out their international rosters more than most other countries around the world. While that has allowed the USA to field extremely deep teams that oftentimes include breakout college stars, the lack of synergy between USA Swimming’s 2022 qualifying meet and the American collegiate system is apparent.

When FINA rescheduled the 2022 World Championships, USA Swimming had little wiggle room to host a qualifying meet. With the NCAA Championships taking place at the end of March and World’s starting June 18th, it left USA Swimming with a very small window in which to put their trials and they landed on a week in which many collegiate swimmers will be heading into, or in the midst of, final exams.

It does feel like when you go to an Ivy for swimming, academics always come first. It seems as if your athletic performance can take a back seat no matter which Ivy you go to.

A lot of professors at Ivy League schools also don’t really care about athletes and accommodate only as much as they’re required.

Tough call, but he made the right none. Next year …

A man of the books, my kind of king 👑

Don’t think he’ll be the only big name college swimmer opting out. I think with the college season just ending, academics, and the last second nature of it people will decide to skip it. Might very well the right move thinking about Paris, marathon not a sprint

Matt is very strong to make this decision and clearly is a bright student who cares about academics. This is more of USA Swimming’s fault. Given that Worlds begin June 18th, wouldn’t it have made more sense for trials to have been a week or two later than they are currently? That’s just based on the trials-Olympics timeline.

I’m guessing that would also conflict with finals for a lot of other schools as well as AP exams for high schoolers. But my guess is that USA Swimming just plunked down a date for trials and expected the athletes to work around it.

wharton not just “one of the best”, it IS the best

Yup our current President went there

HBS grads in shambles with all the downvotes

A huge strike against Penn. they should be able to work out 3 days to go there and swim 200. The second spot in 200 is open IMO

Do you think Nic Fink has a strong hold on the 1st spot? I believe he’s definitely the biggest contender for it, but he didn’t seem very on form at San Antonio. Would love to be proven wrong tho

That’s what I was thinking, I feel like my professors would be understanding enough to let me reschedule if I had a real chance to make the worlds team.