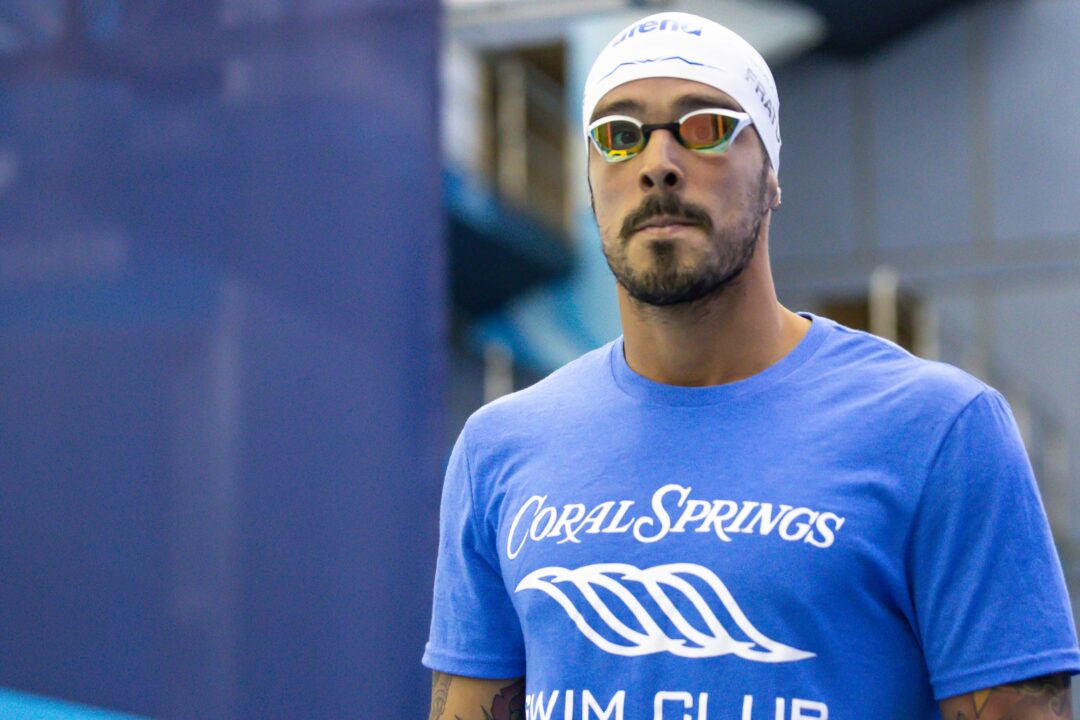 We are about to enter the 2nd stop of the 2022 Mare Nostrum Tour, with action in Barcelona beginning tomorrow, Wednesday, May 25th.

We’re seeing a larger field than the previous stop in Monaco, setting up some potentially head-turning times among the likes of British, American, French, Brazilian and Japanese swimmers ready to get some pre-World Championships racing under their belts.

Let’s take a look at the top 5 stories specifically on the men’s side, while you can catch up on the women’s pre-meet watch list here.

We know that British breaststroking ace Adam Peaty was originally supposed to race here in Barcelona, but we also know that the multi-Olympic gold medalist is hobbling around in a boot.

27-year-old Peaty incurred a foot injury recently, putting him out of the water for 6 weeks and out of the entire Mare Nostrum Tour.

However, the men’s breaststroke field is still stacked with international talent. That means in the fast and furious 50m sprint we’ll see a battle among several of the top 5 in the world this season, including Italy’s Nicolo Martinenghi, America’s Michael Andrew and Brazil’s Joao Gomes Junior.

The 100m is led by Dutchman Arno Kamminga, the only other man in the world besides peaty to have notched a time under the 58-second barrier in the event. He’ll be joined not only by Andrew and Martinenghi but also British Commonwealth Games champion James Wilby.

Finally in the 200m breast, Kamminga and Wilby will contend with a pair of Japanese racers in Yu Hanaguruma and Ryuya Mura.

We reported this past March that two-time British Olympic finalist Max Litchfield joined Chad Le Clos in his native South Africa. Prior to his move to South Africa, the IM specialist had been a member of the elite squad at National Centre – Loughborough under coach Dave Hemmings.

Litchfield and Le Clos have been training together while also now traveling through this Mare Nostrum circuit.

In Monaco, 27-year-old Litchfield notched a time of 4:17.43 to snag 400m IM silver behind South African Matt Sates. Here in Barcelona Litchfield is slated to race the 400m free and 400m IM.

For the first time in 3 years, the nation of Japan is participating in the Mare Nostrum Tour. Although not in Monaco, the segment of the nation’s World Championships squad is set to race here in Barcelona as well as Canet.

That means on the men’s side we’ll see the aforementioned Yu Hanaguruma take on the breaststroke events, following up on his breakthrough performance at the Japanese World Trials.

There in Tokyo, the 22-year-old beat out Olympians Mura and Shoma Sato in the 200m breast to notch a lifetime best of 2:07.99 in the event. His performance rendered him the 7th fastest Japanese swimmer to date, which is especially significant since the nation has seen 3 of that list hold the World Record in the event at one time.

We mentioned above how Sates took the men’s 400m IM at the previous stop in Monaco but that wasn’t the only event in which the 18-year-old made his mark.

Having left his short-lived collegiate career as a University of Georgia Bulldog, NCAA title in tow, Sates has embraced the pro life.

We’ll see if Sates can tweak his racing strategy and tighten up some of his tactics to improve even further on his way to next month’s World Championships.

If you watched the latest edition of the SwimSwam Breakdown Podcast, then you know there was a remarkable number of veteran men who raced the 50m skins last week in Monaco.

Brazil’s 42-year-old World Record holder Nicholas Santos put up a strong 22.83 in the final round to take the men’s 50m fly knockout event while his 36-year-old teammate Gomes Junior won the 50m breast skins in a final round effort of 27.10.

We will see these competitors and more in Barcelona and we’ll see if they can recover and bring the heat once again here in Barcelona.

Are there no prelims?

There are, but there is no livestream of them.
You can see the results on the website…

No mention of Milak? He is clearly the top swimmer amongst the potential participants.

hahaha good one. Too sensitive.

I’m genuinely confused can someone explain what you’re talking about exactly?

All stories on men. Do better

Did you even read the title?

These things can be edited after the time stamp of commenting

You know what cannot be edited? The Timestamp on Tweets. Here is the original Tweet from when the women’s article went out yesterday: https://twitter.com/swimswamnews/status/1528809859650621450

Here’s the title from Feedly that wouldn’t have changed.