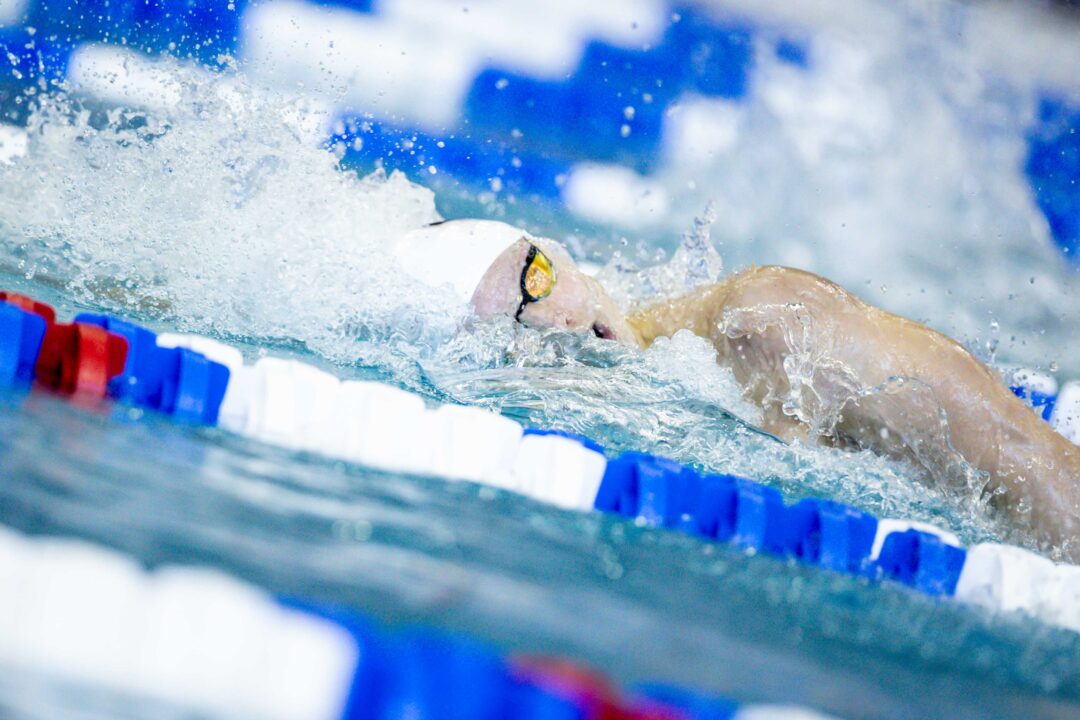 The 2022 Mare Nostrum Series concludes today at tour’s final stop in Canet-en-Roussilon, France, where several swimmers are looking to finish huge weeks atop the podium.

Swedish world record holder Sarah Sjostrom had the top qualifying times in the 50 fly and 100 free after winning Saturday’s 50 free. Germany’s Anna Elendt enters the women’s 50 breast final as the top seed seeking her fourth gold of the tour. Elendt swept the 50 and 100 breast in Barcelona before defending her 100 breast title yesterday in Canet. In the women’s 100 back, Canada’s Kylie Masse appears on her way to a clean sweep of the backstroke events in Canet after earning double gold in the 50 and 200 back on Saturday.

A pair of Americans also boast top seeds entering the finals. 23-year-old Michael Andrew qualified first in the 50 breast and second in the 50 fly behind Trinidad and Tobago’s Dylan Carter. Andrew is trying to add to his two gold medals from Barcelona after falling short in Canet yesterday. In the women’s 400 free final, top-seeded University of Texas commit Erin Gemmell is looking to capture her first Mare Nostrum gold medal following a runner-up performance in the 200 free in Barcelona.

Keep refreshing this page for live, event-by-event updates of all the action from Canet.

After being edged by Andrew for the gold medal in Barcelona, Brazil’s Joao Gomes Junior returned the favor with a first-place finish in Canet. Andrew’s 27.20 was a tenth of a second behind Gomes Junior, slightly slower than his 27.06 that won gold in Barcelona. Brazil put two on the podium with Felipe Franca Silva taking bronze in 27.70, just ahead of Germany’s Lucas Matzerath.

18-year-old Lydia Jacoby bounced back from yesterday’s bronze-medal performance in the 100 breast by winning her first gold in Canet here with an impressive finish in the 50. Only .06 seconds separated the top three finishers. University of Texas swimmer Anna Elendt took bronze after winning the 100 breast yesterday while South Africa’s Lara van Niekerk snagged silver. Brazil’s Jhennifer Conceicao barely missed out on the podium with a fourth-place finish in 30.46.

42-year-old Nicholas Santos continues to prove that age is just a number. The Brazilian sprint star used a late surge to top the podium ahead of 27-year-old Brit Ben Proud. Santos won the event at both previous stops in Monaco and Barcelona. Top-seeded Dylan Carter of Trinidad and Tobago missed the podium by .01 behind Hungary’s Szbebasztian Szabo.

Sjostrom secured her second gold medal in Canet, four-tenths ahead of Canada’s Maggie MacNeil. Sjostrom’s time of 25.57 has only been bested by two women in the world this year — American Olympian Claire Curzan being one of them — other than Sjostrom herself. Fellow Swede Sara Junevik found the Mare Nostrum podium for the first time this year with a bronze-medal swim in 26.03, .15 faster than Tessa Giele of the Netherlands.

17-year-old American Erin Gemmell had the top time in prelims (4:12.88), but she couldn’t overcome Japan’s Miyu Namba in the final. It’s Gemmell’s second silver of this year’s Mare Nostrum tour after earning silver in the 200 free in Barcelona. Japan put two on the podium as Waka Kobori took bronze in 4:10.18.

Japan won its second event in a row here, this time courtesy of a Mare Nostrum record by Ryosuke Irie. Irie’s 53.00 unseated Hugo Gonzalez‘ previous record of 53.08 from Barcelona in 2021. France’s Yohann Ndoye-Brouard was still only .15 behind Irie’s record time. South Africa’s Pieter Coetze couldn’t pick up a fifth gold medal at this year’s Mare Nostrum, but he still took home a bronze.

Canada’s Kylie Masse set the Mare Nostrum Canet record during prelims this morning, and the 26-year-old broke the overall Mare Nostrum record with a 59.57 in the final to seal her fifth gold medal of the tour. Kathleen Baker held the previous standard in the women’s 100 back with a 58.77 from Barcelona in 2018. Masse’s swim marked back-to-back Mare Nostrum records after Irie’s swim in the previous event. Fellow Canadian Ingrid Wilm wasn’t far behind in 59.84 while Great Britain’s Medi Harris reached the podium for a bronze medal in 1:00.48.

Dutch star Arno Kamminga completed his quest for another double gold in the 100 and 200 breast after achieving the feat at the past two Mare Nostrum stops in Monaco and Barcelona. Kamminga won his sixth gold medal of the tour with a 2:09.53, just .08 seconds ahead of Japan’s Yu Hanaguruma, who came into the final as the fourth seed. Japanese teammate Ryuyu Mura rounded out the podium, taking bronze in 2:10.75 while second-seeded Swede Erik Persson missed the podium with a fourth-place finish in 2:11.08.

Great Britain had a 1-2 finish led by Molly Renshaw, who won the event in Barcelona. Fellow Brit Abbie Wood finished .57 seconds behind her countrywoman. Ireland’s Mona McSharry took bronze in 2:26.80 after winning silver in Barcelona.

Italy’s Giacomo Carini pulled out a huge win from out of nowhere in one of the tightest races of the day, just .11 ahead of Japan’s Takumi Terada. Top-seeded Hungarian Tamas Kenderesi was only .37 behind in third place. Great Britain’s James Guy led for most of the race before fading to fifth place down the stretch.

Japan’s Kina Hayashi reached the wall just a tenth of a second ahead of Great Britain’s Laura Stephens to avenge a close loss last week in Barcelona. University of Texas swimmer Emma Sticklen, who won bronze in Barcelona, missed the podium by .39 seconds behind Hungary’s Zsuzsanna Jakabos.

Great Britain’s Tom Dean captured his third gold medal of the week in the 100 free after barely sneaking into the final in the eighth qualifying spot. France’s Maxime Grousset took silver, .12 seconds ahead of Hungary’s Szebasztian Szabo, who earned his third bronze medal of the week.

Swedish world record holder Sarah Sjostrom picked up her third win of the weekend in Canet and fifth total this week. Her 53.05 was more than half a second ahead of Canada’s Penny Oleksiak, who won bronze yesterday in the 200 free. Fellow Canadian Kayla Sanchez rounded out the podium with a third-place finish in 54.12 after earning a silver medal in Barcelona in the 100 free. France’s Marie Wattel missed the podium by a mere .04 seconds.

South Africa’s Matt Sates has been unbeatable this week. The 18-year-old won his ninth gold medal in as many finals at this year’s Mare Nostrum, pulling away from the field during his freestyle leg. Former University of Texas swimmer Sam Stewart reached the wall .13 seconds ahead of Switzerland’s Jeremy Desplanches to pick up another silver medal for the Americans. Stewart also finished in second place behind Sates in Monaco.

Katinka Hosszu clocked the third-fastest time in the world this season to triumph in the women’s 400 IM final. The Hungarian great also won the event in Barcelona. Japan’s Ageha Tanigawa was nearly three seconds behind in second place while Italy’s Sara Franceschi earned her first medal of the week to round out the podium.

Im going to be retiring from work and Irie will still be popping off 53s, that guy needs more recognition for his consistency over the years than he gets. Beautiful stroke as well

He’s been continuously at world elite since he won gold at 2006 Asian Games as a 16 yo kid.

@SwimSwam: Are you sure about the top 3 in men’s 1500 free? On the following site it says that Mühlleitner finished second with 15:07.98.
https://www.liveffn.com/cgi-bin/resultats.php?competition=77291&langue=fra&go=epreuve&epreuve=56

Jacoby is no fluke

It will be exciting to see what she can do in Texas. Having access to the training facilities alone will have an immediate impact.

Improving her 50 is a lot more important than improving her 200. IMO, she should experiment with using her 50 tactics in the 100. Get to the far wall as fast as you can then keep going. It might look and feel ugly at first but eventually you feel more comfortable with the early speed.

What an exciting 1-2 punch with Elendt. It’s going to be a battle for relay spots. At the moment it seems like Elendt has a slight edge with short course walls.

That a best time for Macneil?

How is ryosukie Irie not 75 years old yet

I don’t think so. He was semi-tapered for champs but not at the moment

Faster than what she went in Tokyo!

Love to see it

That was the only double take

Quite excited to see a tapered Tom Dean this summer – Not too shabby beating the likes of Grousset & Miressi over 100 this week. Swimming v fast compared to the other Bath boys.

What makes you think so?

Pvdh is the resident troll (most of the time) FYI

Pvdh has been trolling in Swimswam for years.

He’s got 3 major meets this summer. It would make absolutely no sense for him to be tapered now.