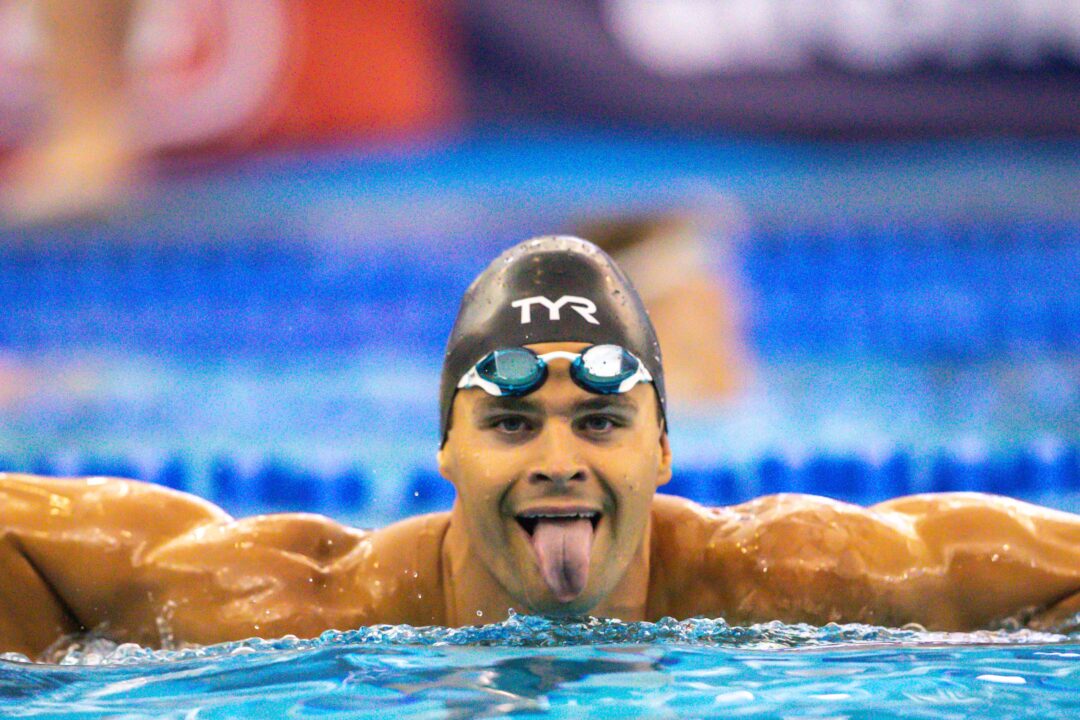 American Michael Andrew is ready to carry on his winning momentum from Barcelona to Canet for the final stop of the 2022 Mare Nostrum Tour. Archive photo via Jack Spitser/Spitser Photography

We’re about to enter the 3rd and final stop of the 2022 Mare Nostrum Tour, which culminates in Canet-en-Roussilon, France. With many of the fields remaining intact from the just-concluded stop in Barcelona, Spain, let’s take a look at the top men’s stories set to unfold beginning tomorrow, Saturday, May 28th.

We saw Brazilian Olympic medalist Bruno Fratus take home the gold in the men’s 50m freestyle event over the course of the first two stops of this Mare Nostrum Tour and the 32-year-old shows no signs of stopping en route to this 3rd title.

This Canet stop hosts medal contenders Michael Andrew of the United States, Thom de Boer of the Netherlands, Josh Liendo of Canada and Maxime Grousset of France, among others. We’ll see if Fratus can hold his own against these competitors to once again end up on top at Mare Nostrum- Canet.

The former University of Georgia Bulldog hit a personal best of 1:45.91, dipping under the 1:46 threshold for the first time in his young career. That claimed the Barcelona meet record over Dean’s prelim swim of 1:46.89 from the morning heats.

Sates will try to improve upon his result now that he’s tasted 1:45 territory, possibly getting even closer to the longstanding South African national record of 1:45.20 Chad Le Clos put on the books in 2016.

With both studs in the pool in Barcelona earlier this week, it was 42-year-old Santos who took the gold in the event, posting a time of 23.03 to establish a new meet record. That smoked the 24.03 Govorov logged in the morning heats for 11th before the 30-year-old bowed out of the final.

In the preceding Mare Nostrum stop in Monaco, Santos produced a winning effort of 22.83 in the final round of the skins competition.

American Michael Andrew edged out South Africa’s Pieter Coetze in the Barcelona final of the men’s 50m back, clocking a new Barcelona meet record of 24.64 in the process.

This time around in Canet Andrew will battle Frenchmen Mewen Tomac and Yohann Ndoye-Brouard, in addition to the Japanese maestro Ryosuke Irie the 23-year-old has already raced against.

Andrew’s time from Barcelona hacked .16 off of the 24.80 he notched at the U.S. World Trials, so the Olympian is headed in the right direction in terms of time drops entering this final stop.

With British breaststroking ace Adam Peaty still out of racing commission with a foot injury, all eyes are on Dutchman Arno Kamminga to continue his Mare Nostrum reign.

Already having reaped the 100m/200m breaststroke double both in Monaco and Barcelona, the two-time Olympic silver medalist looks primed to do it again here in Barcelona. That is, as long as he can prevent Andrew, Great Britain’s James Wilby and others from getting to the wall first.

The 40 fly world record holders are the wrong way around

Was looking for this. Thanks.

>Males
What an odd choice of words