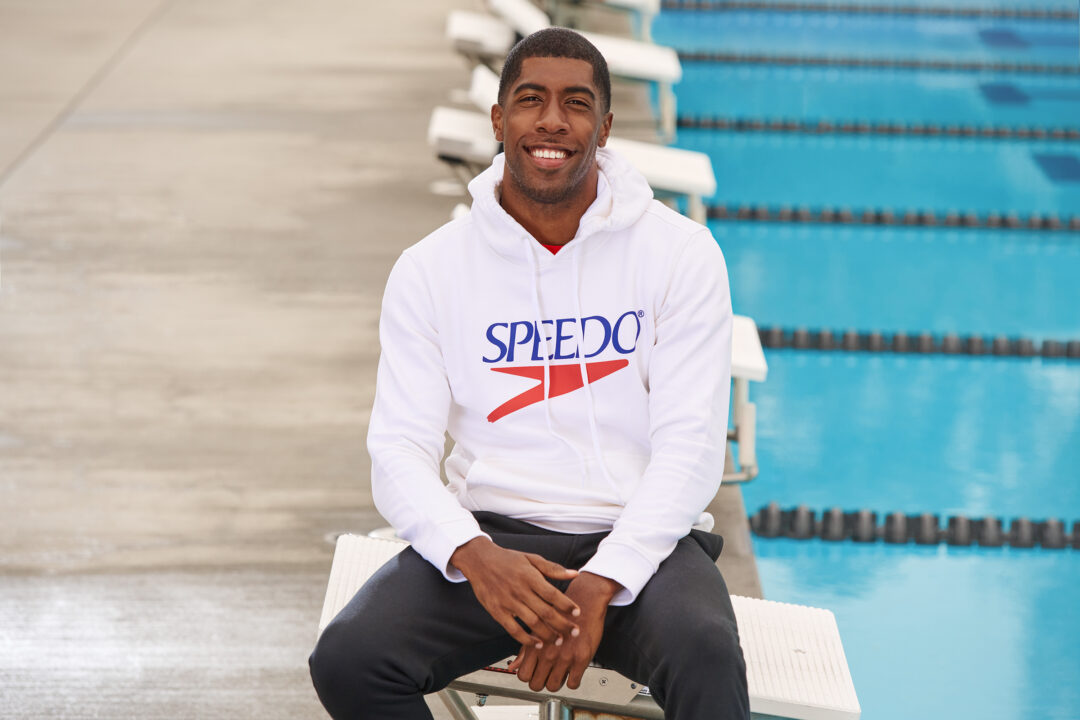 Hill hope to use his nonprofit to teach one million people to swim per year, beginning in 2028 and starting in his hometown of Los Angeles. Archive photo via Speedo

You may know Jamal Hill from his bronze medal-winning 50 free at the 2020 Tokyo Paralympics. You may know him from when his picture was plastered on a building in Los Angeles during Speedo’s Make Waves campaign.

But Hill’s legacy might just end up being his Swim Up Hill Organization, which aims to teach one million people to swim per year by the year 2028. Beginning in LA but looking to expand globally, Swim Up Hill provides swim education designed for low-to-middle-income communities.

Hill spoke to the SwimSwam podcast, and said he sees his own life as encompassing three areas: his life as a professional athlete, his role within Swim Up Hill, and his entrepreneurship with Aquatics Today.

“I was Extremely Skeptical”

Hill has already made a name for himself as a Paralympian, swimming in the S10, SB9, and SM10 classifications. Hill emphasized that his career as a professional athlete has helped give visibility to the other aspects of his life, such as his nonprofit work. And, in May 2021, Hill joined Team Speedo, his visibility increasing literally with the Make Waves campaign in LA.

Though the partnership has been a good one, Hill said that he wasn’t sure about working with Speedo in the beginning.

“When we first sat down with Speedo, I was extremely skeptical,” Hill said. “It’s the year after George Floyd[‘s death], and the Black Lives Matter movement was still at its height, and in my experience now, more than ever, people just want the token… Am I just checking boxes? Am I going to be valuable here? I’m building my own platform–is that going to stifle my independent growth?”

After sitting down with Speedo’s corporate team, however, Hill said he began to see the potential for a long-term partnership. He said that he didn’t expect perfection, or that both his team and Speedo wouldn’t have to work for the partnership, but that they had a united goal and kept coming back to the table to work together.

Hill added that his original skepticism has disappeared because he can feel the value of the communications he has with the Speedo Team and the impact they can have together. In fact, Hill’s Make Waves campaign with Speedo is his current make waves moment.

“What’s really great is that [the campaign] touched all of LA County,” Hill said. “This is my city, this is my county, this is my home. I was an LA County lifeguard. All of these people, the highest traffic in LA, saw this every single day…The pride this brought to my city is what got me really excited.”

From Mom to Millions

When Hill was a lifeguard in LA, he taught his mom to swim. He said that she wasn’t allowed to learn to swim growing up due to concerns for her safety, but that she was an Olympic-caliber athlete and could still make forward movement in the water. While he was lifeguarding, he helped teach his mom how to start and stop in the water with a kickboard to complement her knowledge of moving in the water.

Flash forward to 2018, when Hill made the Paralympic roster. According to the Swim Up Hill origin story, Hill then reflected on how few role models he had that looked like him growing up, and how he wanted to increase opportunities for others. Beginning with his home city of LA, Hill decided to teach one million people to swim, per year, starting in 2028.

“Years later, the Swim Up Hill foundation has begun, she knows how to swim, and now I’m running classes for my aunts, her friends, Black women over 40–which is a rare demographic for swim lessons,” Hill said. “Not only are these women learning how to swim, but they’re loving it.”

Hill said that he personally enjoys teaching ages 6-18, because they can communicate better than kids under six, but might not have as many personal fears surrounding swimming as adults. Hill added everyone comes to swimming from a unique place–if they’re older adults, for example, they might have had a near-drowning experience in the past or an extreme fear of drowning imposed by someone else.

To address these individual needs, Swim Up Hill works with people to overcome their psychological barriers to the water. As long as someone is willing to pick their feet off up the ground while in a pool, Hill said that they can learn to swim.

But Hill doesn’t want Swim Up Hill to be pigeonholed into working with certain demographics at the expense of others. He said that the foundation aims to work through all of the different barriers people might have to learning how to swim. For example, while water inequity is its own problem, if a student has the ability to get water but has no pool, the foundation will instruct the student to fill up any receptacle they can with water to practice breathing, floating, and more.

The third stake of Hill’s life is his own entrepreneurship. He’s the managing director of Aquatics Today, an “online space to help aquatics directors streamline their work.” Hill said that Aquatics Today seeks to unite the aquatics community beyond competitive swimming to include lifeguards, facilities managers, scuba divers, kayakers, and more.

Working to grow Aquatics Today also helps give Hill a purpose, he said.

“There are a lot of distractions out here,” Hill said. “Getting really clear on that purpose is the biggest thing. A lot of people do a lot of things, they’re really busy, but they’re going nowhere. Having that clarity of purpose makes clear what’s not enough, that this is only step one out of however many steps.”

As he seeks to increase who is considered a part of the aquatics community, Hill said his entrepreneurship is strengthened and complemented by his work as a philanthropist and a professional athlete.

Jamal is a fantastic athlete and a wonderful human. Great to see this story. Swimming is a life skill.